Two Climbers Paraglide From the Summit of Aconcagua
News +

Two Climbers Paraglide From the Summit of Aconcagua

Paragliding from the summit of South America’s highest peak. 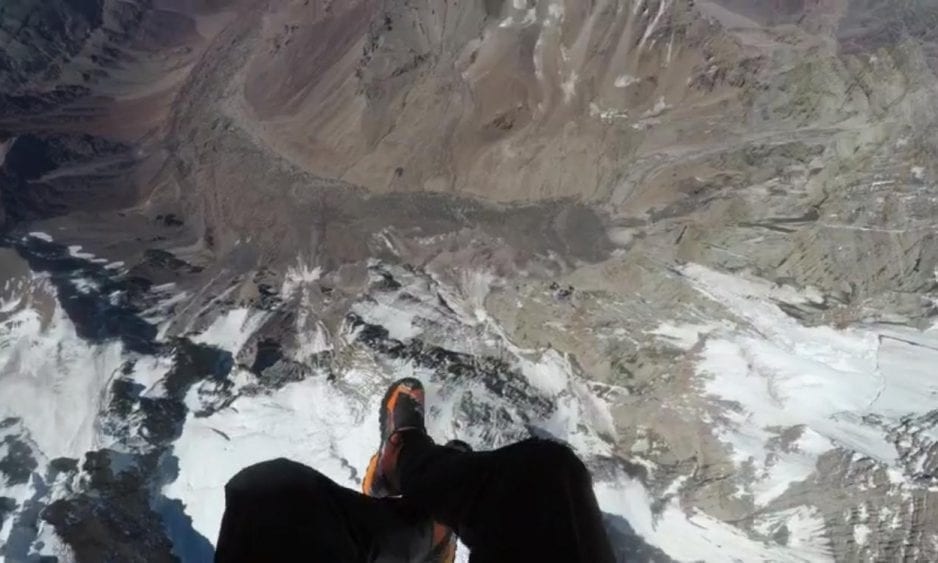 Looking down during the flight from the summit. Photo: Courtesy of Jean-Baptiste Chandesris and Gabriel Mazur.

Standing on the summit of Aconcagua, Jean-Baptiste Chandesris and Gabriel Mazur could not believe there was no wind. It was the morning of February 15, 2019. The sun was shining and everything was calm at 7,000 meters. It was not what they had expected—high winds had been their main concern. Ordinarily they would have been ecstatic over the placid conditions, but this was almost too quiet for what they had in mind. But winds or not, they were ready to do what they’d climbed all the way up here for: to paraglide off the top.

Aconcagua (22,841 feet), located in Argentina, is the highest peak in South America and the highest outside of the Himalayas. With winds routinely eclipsing 100 miles per hour, it was an obvious choice when Chandesris and Mazur decided to try to break their personal paragliding altitude records and to train for future projects.

Before they found themselves in that windless world, they had had to get to the top of Aconcagua—no mean feat. Trying to maximize their chances of taking flight from the summit, they decided to forgo climbing a more technical route to the top because the weather window was short, and they did not have time to acclimate properly. They fought off symptoms of altitude sickness most of the way up.

For almost an hour and a half, the pair waited at the summit for the wind to whip itself into a fury, but it always ended up blowing the wrong direction, with only random light gusts. “We waited for a long time for an OK take off. By ‘OK’ I mean one that would allow us to fail without killing ourselves,” Chandesris says.

When they finally got that “OK” moment—or, rather, moments; the two took off 15 minutes apart from each other—they had to run and take off laden down with with 26-pound packs.

Once they were in the air, the low winds were a “gift” for what they both agreed was a “very quiet and enjoyable flight above the spectacular south face of the mountain.”

Mazur says, “I could see the curvature of the earth. It felt liberating, spacious, calm.”

After the relief of the wind carrying their weight for about 28 minutes each, they both had smooth landings. Mazur landed at Horcones—the entry of the Aconcagua Provincial Park—15 minutes away from Chandesris, who landed in Confluencia, another camp on the way to Aconcagua base camp.

Even though they landed at different camps, approximately an hour walk from each other, Chandesris and Mazur both enjoyed warm welcomes from the surprised people who suddenly saw men floating down to the Earth. People asked them where they were coming from, and they remember the excitement and accomplishment of saying, “From the summit!” They were treated to food, cheering and coffee to celebrate their very rare feat on Aconcagua.

Rare because it is complicated to get permits to try technical routes or other high-risk activities (like skiing or flying) on Aconcagua. Chandesris and Mazur did not know until the very end if they were going to be able to get a permit or not. They had to provide considerable documentation that proved they had good physical and mental health and enough experience in mountaineering and paragliding. Plus they signed a $30,000 payment agreement in case they needed a search and rescue operation.

“Paperwork-wise it was exhausting. I was ready to give up on the project as they got on my nerves,” Chandesris says. Mazur knew they got lucky when he heard that the Red Bull paragliding team had been rejected before. According to a representative from the Information Office of Aconcagua Provincial Park, people have flown from the summit before but he could not recall when or if a permit had been given previously.

Aconcagua was the first official leg of a project that will see Chandesris and Mazur’s continue to push their climbing-flying combination adventures higher and farther.

They don’t have an official name, but they referred to it as Climb & Fly. Next they hope to fly off numerous 8,000-meter summits and the six North Faces of the Alps. Also, they plan to share their passion and take locals on free tandem flights wherever they go.

As for now, their next immediate goal is to climb and fly from the summit of Broad Peak in July. Located in Pakistan, it is the 12th highest mountain in the world at 8,047 meters.

According to Mazur, it is not doing something that has never been done that motivates them, but “to grow as climbers, to do what inspires us and to learn to be different and yet enjoy the same projects.”