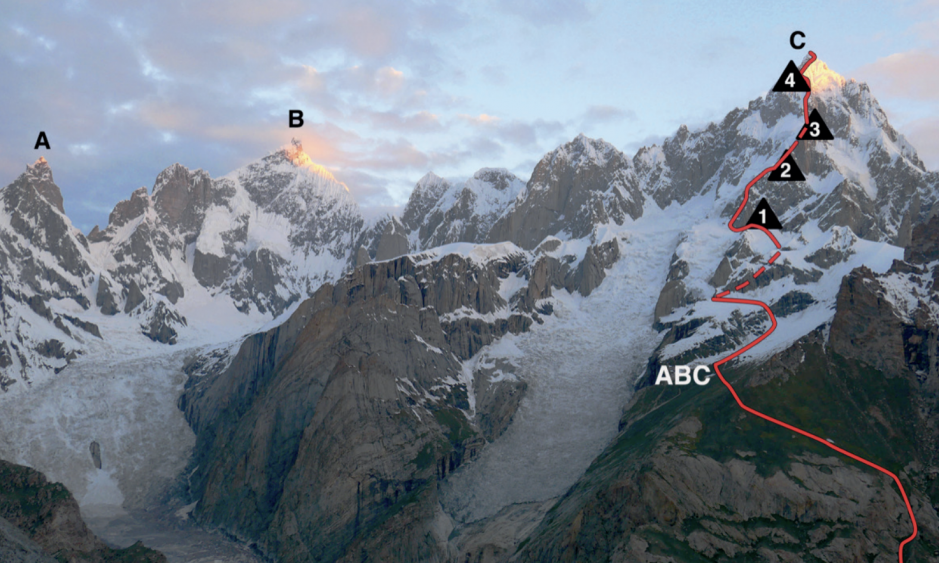 Four remarkable ascents will be awarded 2020 Piolets d’Or in Ladek-Zdroj on September 19. The year 2019 turned out to be very rich for modern alpinism, with a substantial number of significant first ascents from all over the globe. The protagonists were alpinists of wide diversity. There were notable ascents by the “old guard” of highly-experienced high altitude climbers, but also fine achievements by a promising new generation of “young guns.”

Our eight-member international technical jury had the difficult task of making a choice, the intention being not to discard any remarkable climbs, but to choose a few significant ascents as “ambassadors” for modern, alpine-style mountaineering. In the end the jury chose what we believe to be a consistent selection of four climbs. These will be awarded next month in Ladek.

The four ascents comprise two from Nepal and two from Pakistan. Most had seen previous attempts and were on the radar of number of strong parties. All climbed to rarely visited, or in one case virgin, summits.

Marek Holeček and Zdeněk Hák (Czech Republic) — May 17-23, Roundtrip From Base Camp

Since he first saw it in 2001 Marek Holeček had dreamed of climbing the great northwest face of Chamlang in Nepal’s Mahalangur Himal. Others had shared thesame dream, and after more than half a dozen attempts the face had become one of the most coveted in the country. When Holeček and Zdeněk Hák arrived in spring 2019 it was obvious the face had little snow and a lot of hard water ice. Outflanking objective dangers in the lower section would prove to be one of the keys.

From a bivouac at 5,300m on the glacier below the face the two Czechs headed up more or less directly below the summit. On the fourth day they reached the upper east ridge and bivouacked 80m below the top. On May 21 they crossed the summit and spent the rest of the day trying to navigate the Original Japanese route on the south ridge. This proved more difficult than expected. Two more bivouacs—without food —and difficult down-climbing and rappelling in often poor visibility were needed to reach the valley.

The route was named UFO Line as a tribute to Reinhold Messner and Doug Scott, who in 1981, with Sherpas Ang Dorje and Pasang, were the first to climb the north side of the Chamlang massif and reach one of the middle summits. There, they were puzzled by a box-like object that hovered above them, shining magnificently in the midday sun.

Alan Rousseau and Tino Villanueva (USA) — October 13-17, Roundtrip From a Glacier Camp Below the Face

In 2012, on their first expedition to the Himalaya, Alan Rousseau and Tino Villanueva made the first ascent of Langmoche Ri on the north ridge of Tengi Ragi Tau in Nepal’s Rolwaling Himal. Walking below the west face of Tengi Ragi Tau they were mesmerized by its sheer magnitude and fine ice runnels through beautiful granite. They returned in 2014 to attempt a direct line, climbing to around 6,500m in less than ideal weather before retreating. Five years later and the face was now attracting the attention of several strong parties.

After crossing the Tashi Laptsa pass and camping on the Drolambo Glacier, the two Americans climbed the initial dry-tooling pitches to access the snowy face, then made three bivouacs before reaching the summit. A tricky rappel descent was made down the line of ascent. With a multi-pitch ice crux high on the route, followed by steep flutings of unprotectable snow, this technical and elegant line on one of the most outstanding unclimbed faces of the Rolwaling was just reward for the perseverance of two experienced alpine guides. Their ascent was only the second of this difficult mountain and the first in alpine style.

Another much-coveted problem, this time in the eastern Pakistan Karakoram, Link Sar had received at least eight attempts before 2019. But the difficulties are not just about climbing the peak: the Indo-Pakistan conflict has made this region an on-off affair (largely off) when it comes to obtaining a mountaineering permit.

Steve Swenson first attempted Link Sar in 2001 with a strong American team, and then again, after a number of failed permit attempts, in 2017 with Chris Wright and Graham Zimmerman. Having now discovered a feasible line of ascent, these three decided to reinforce the team in 2019 with the addition of Mark Richey.

Six days after setting out from Advanced Base, they reached the top. During that time they had waited out a 36+ hours storm, and on the summit day recovered from a 35m leader fall due to avalanche and overcome an ungradable final pitch of deep, steep and unstable “Peruvian” snow. A little over two days were then needed to reverse the route. These climbers succeeded because they were persistent, used their 126 years of combined climbing experience, and understood what partnership meant.

The Hunza region of the Pakistan Karakoram holds a number of impressive mountains that fall only a few hundred meters short of the 8,000m mark. One of the most outstanding is Rakaposhi, first climbed via the southwest ridge in 1958. Whilst the south side of the mountain—leading to the crest of the great southeast ridge—had been reconnoitered in the past, it remained untouched, climbers unable to find a feasible route. An ascent from this less visible side of the mountain would be highly exploratory.

From a 3,660m base camp at the snout of the glacier, and in generally unstable weather, Kazuya Hiraide and Kenro Nakajima climbed the south face to 6,100m, both to acclimatize and confirm that their chosen line would go.

On their second outing they took three days, strenuously climbing through often deep soft snow, to reach a camp at 6,800m on the southeast ridge, where they were forced to wait two days in bad weather. After this they climbed to the summit and back in a single long day, and on the following reversed their line of ascent all the way down to base camp.

Although the route does not feature the high technical difficulties of the three other awarded ascents, its huge length, and the commitment and style of Hiraide and Nakajima’s determined ascent on a rarely-climbed mountain, makes it of equal merit for a 2020 Piolet d’Or.