Twenty-one-year-old Chen ticks off one of the hardest routes in North America. 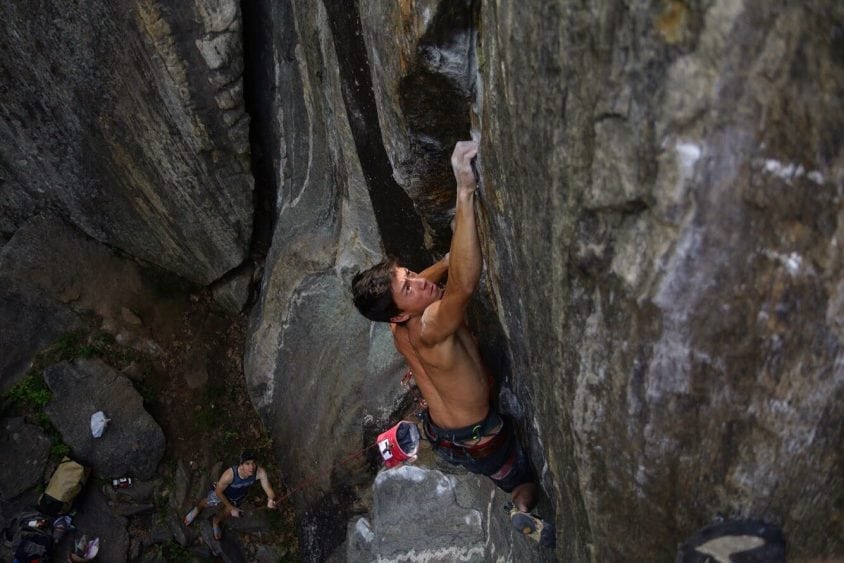 Chen focusing hard as he makes his way up Jaws II (5.15a)

Software engineer by day, hardcore climber by night, twenty-one-year-old Tristan Chen has made an impressive ascent of Jaws II (5.15a), one of the hardest bolted routes in North America. Chen, a little known climber, has an impressive climbing resume. Notable ticks include Livin’ Astro (5.14b) in Rumney, and Echale (V14) in Clear Creek Canyon.

Jaws II, Chen’s first 5.15a, in Rumney, New Hampshire, has seen only a handful of ascents since it was first re-climbed by Vasya Vorotnikov in 2007 after a few holds broke off of the original Jaws (5.14b). At 5.15a, only the elite have been successful on Jaws II. The list of climbers who have sent it is short: Vasya Vorotnikov, Daniel Woods, Mike Foley, Andrew Palmer, Paul Robinson and Alex Megos.

“I definitely have a long way to go before I’d consider myself in the same league as those guys,” Chen says, but admits that it “feels pretty good” to be included on the same list as some of climbing’s best.

Chen and Jaws II have a long history together. Vorotnikov completed his first ascent of Jaws II the very year Chen began climbing and since then it has been ingrained in his memory:“I grew up around there [in Concord, Massachusetts] and Jaws was always the hardest thing.”

I came here to chew bubblegum and kick ass, and I’m all out of bubblegum. Jaws II 5.15a ? @_kevin_donovan_ #goforthandcrush #morespraytocome #imtakingthedamnpoints #climbing

Chen modestly attributes his success this summer to luck: “The send was no different than other attempts, I just lucked out and actually stuck the foot dyno, and didn’t dry fire off the right hand.” But the part of the story Chen left out was his training and hard work that put him in a position to stick the crux.

He explains,“My foot was injured this spring, so I basically couldn’t wear climbing shoes for over a month… I ended up just campusing on the Tension board and spray wall at the Tension Training Center… that combined with gaining ten pounds this spring, and dropping it over alpine season went a long way. I’ve also been focusing on just climbing a lot recently, trying to get some mileage in, so I can actually learn how to climb.”

Cool, calm, and collected, Chen got in the zone before his send by listening to some of his favorite music. When asked what was going through his head before he clipped the chains, he responds, “Nothing, I was just focused… But I was pretty psyched once I had them clipped though!”

For a full video of Chen’s ascent, check out his Instagram.

Interview: Jimmy Webb Sends his “First True” V15 with The Wheel of Wolvo