Tom Herbert Sets New Speed Record on "The Muir Wall," First Climbed by His Father in 1965 - Rock and Ice
News +

Tom Herbert Sets New Speed Record on “The Muir Wall,” First Climbed by His Father in 1965 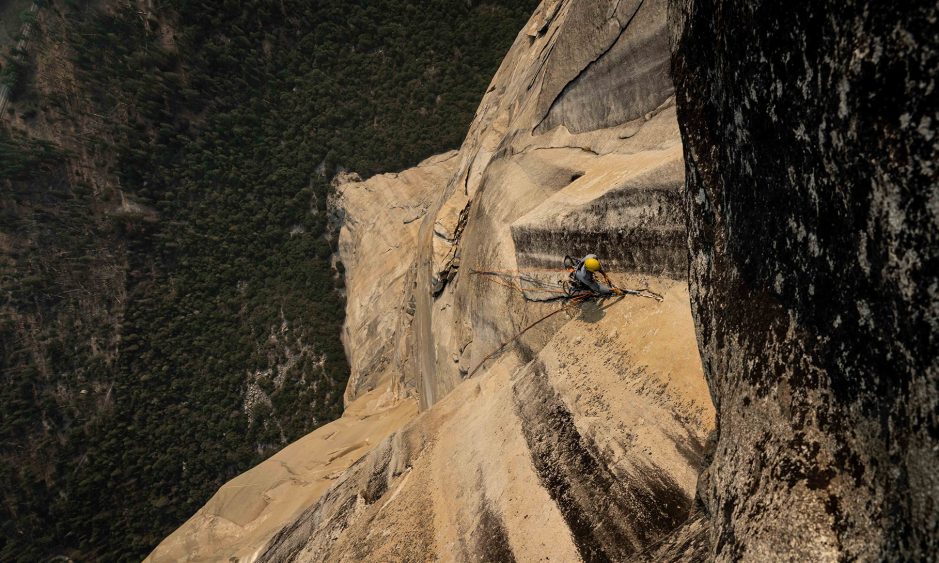 Brandon Adams on the upper third of the Muir Wall during his, Brandom Adams and Tom Herbert’s record-setting speed ascent. Photo: Max Buschini.

John Long had it right: For the first free ascent of Astroman—with Ron Kauk and John Bachar—and for the first one day ascent of the Nose—with Jim Bridwell and Billy Westbay—he teamed up with two of Yosemite’s best climbers and they made history. I am no John Long, but I am savvy enough to know that if I am going to get up the Muir Wall in a push (no bivouac), I need to team up with talent that will become the legends in 20 years like the guys noted above. Lucky for me, I know two such guys.

Roger Putnam, author of the guidebook Yosemite Bigwalls has 64 El Cap ascents with five speed records to his name. More importantly, he has become a close friend over the last five years and we have done El Cap 11 times together. Brandon Adams is a climbing ranger in Yosemite with 48 ascents of El Cap. He is quiet and reserved—until he gets in aiders on the Big Stone; then a switch is flipped and he rages. Brandon holds nine El Cap speed records.

In July— after their speed record on Mescalito— both agreed to do the Muir Wall with me. The Muir was first climbed in 1965 by Yvon Chouinard and my father TM Herbert. It was the sixth route on El Cap and lies between the Nose and Salathé Wall. All prior first ascents had been done in parties of three or more and had been done with fixed lines. Chouinard and Herbert started up with 100 pounds in their duffel bags and suffered June heat as well as rain storms. Eight days later, out of food and water and having placed their last bolt, they summited. Royal Robbins did the second ascent in 1968, which was also the unprecedented first solo ascent of El Cap. Robbins described my father and Chouinard’s climb as “the most adventurous ascent on rock ever accomplished by Americans.”

In my 37 years of climbing, there had been one gaping hole in my resume: I hadn’t done my dad’s route. For years Roger and I had planned on doing it as a three-day outing, but our schedules never aligned. Then, this July, we finally got something on the calendar: we set the date for early October when I would have the opportunity to climb it with these legends-in-the-making.

Nearly every route Roger and Brandon do together is a speed record. But both assured me we were just out to have fun and do the route in a push, that speed wasn’t the end goal. I am 51 years old—so 25 years past my prime—and work full time. My block of leading was to be the first 1,000 feet up to Mammoth Terrace (colloquially called “Muir Blast”), which is nearly all free climbing. Even if we were just going to go out and have fun, I had my work cut out for me. Some training and route-prep was in order.

I began July by aiding and cleaning the lower cracks, full of dirt from spring runoff. Getting a partner to aid climb in the Valley when it is 100 degrees is tough. My wife, Sondra, took pity on me and learned to jumar with dirt clods and grass raining down on her. (I don’t understand why she puts up with me after 31 years!) I hand-drilled stainless steel bolts to replace the rusted anchors. Some days I jugged the Heart Lines and rappelled down the upper corners to mini-traction them so I could dial in the movements. A few good friends were kind enough to go up and belay me. The Creek Fire south of Yosemite sent smoke into the Valley but I kept working the route with an N95 mask. Yosemite closed September 17 for a week due to hazardous air quality.

I am always anxious before climbing a big wall, but this this time it was worse. It wasn’t just the climbing; it was the logistics of three of our schedules, the elements, unforeseen obstacles. Would it be  too smoky? Would one of us get COVID-19 before the date? The possible ways for the world to conspire against our plans were many.

And I also didn’t want to slow our team down too much. When a route is done “in a push” you effectively climb until the summit. There was no way of predicting how long it would take— none of us had done the entire climb.

October 2nd 4:50 a.m. The day had arrived. I only slept three hours due to nerves, but after a healthy amount of coffee I was ready to lead my block. I stood at the base with headlamp on and gear sorted, but neither of my partners was ready to belay; they were watching a YouTube video on the phone, laughing hysterically in the dark. Giggles out, we started up.

As I climbed each pitch, I could hear Roger and Brandon laughing at belays in the dark. Each time I yelled down “Rope is fixed!” they started jugging like demons unleashed. They reminded me of my kids during sleepovers—bantering and joking—only now I enjoyed the noise; it kept the mood light.

We passed some friends bivying on Heart Ledges. Roger walked over and gave Patrick Rizzo a hug, chatted for a minute, then came back to start his block for the next 1,000 feet. His block consisted of clean aid (no pitons) mixed with some free climbing. This combo is where he excels—there are few at his level.

Having two ropes allowed for either Brandon or me to jug while the other raced up to put Roger on belay. This technique minimized the amount of “short-fixing” necessary, keeping things a bit safer. The second rope also allowed us to haul up a resupply of gear faster in the middle of a pitch.

After Roger’s block, there was just one section left between us and the summit. When Brandon started up this last third of the route we had already been on the wall for six hours. He is a master of aid-climbing, especially placing beaks (a unique type of piton), which he used in the thin sections. When Roger and I were able to catch up with him on the ledge of the 25th pitch (he had been short-fixing), we drank as much as we could from the four gallons of water we had on our backs. Drinking more water means less weight on your back, but as I guzzled too much water too quickly I suddenly felt like vomiting. It was a problem I had not experienced on an El Cap-in-a-day mission.

Despite the physical exhaustion and effort, the good times abounded. I videoed Brandon stepping on Roger’s shoulders with a big-wall rack. Heavy metal blasted from the cliff face, echoing around the Valley. Max Bushchini, an aspiring videographer rapped in and shot footage of Brandon as the smoke slowly lifted. We topped out with plenty of sunlight. The previous record had been 19 hours 55 minutes. We climbed the route in 12 hours 7 minutes. Did that really happen? I thought to myself.

Climbing fast and safe with two talented friends made that day the most memorable climb of my life. A few days later I sat with my dad TM and we discussed the climb. His memory of the details of the ascent has faded, but the feelings remain undiminished.

TM described the reverence he and Yvon had for the great naturalist, John Muir. They were so inspired by his philosophy of self-reliance in the mountains and his work for conservation that they named the route after him. (I highly recommend My First Summer in the Sierra written by Muir 1869. My dad had me read it as a teen and I re-read it last year.)

Chouinard concluded his article, “The Muir Wall,” in the 1966 American Alpine Journal: “Looking back up at our route late one afternoon when a bluish haze covered the west side of El Capitan, it seemed to have lost a bit of its frightfulness but appeared even more aloof and mysterious than before. It is far too deep-rooted to be affected by the mere presence of man. But we had been changed. We had absorbed some of its strength and serenity. “