The Strength and Timing of Pace - Rock and Ice
News +

The Strength and Timing of Pace

In 2015, I began looking for ways to help a pair of youth female athletes train for a national competition.  I turned to watching videos of female world cup athletes to see what I could learn from the world’s best. The two dominant forces at the time were South Korea’s Jain Kim and Slovenia’s Mina Markovič.  I remember wondering how the two top climbers could be such fierce competitors with such seemingly different styles. I also wondered what those distinctions actually looked like from a quantitative standpoint.  Finally, I wanted to know whether I could take the information and make practical workouts out of them. As a result, I enlisted two of my protégés, Aleksandra Dagunts and Joe Johnson, to help me collect observational data using video of World Cup lead climbing.

In this overview for Rock and Ice, I want to give you a brief look at some of the measures I used for analysis of pacing, as well as some practical ways I have applied interventions to my climbers.  For the full article which visualizes strategic and tactical measures of grabbing and resting, you’ll need to head to my website at https://beta-angel.com/.   The data are from a female World Cup Semi-Final in Haiyang, China, and a female World Cup Final in Kranj, Slovenia in 2014.

One way of approaching a climber’s pace is the amount of grabbing and timing of rests over the course of a route.  Timing of rests is relatively easy to do, until you get to the mysterious micro-shakes.  But what about grabbing and how did we define it? It might seem simple, but it is certainly open for debate. For example, if a climber has an open hand, and closes around a hold, a reasonable individual might consider it a grab.  But what happens if the climber closes around the hold, but opens briefly and grabs again at the same place? Was that considered one grab or two? Did the climber actually use much energy or weight the hold enough to cause some type of fatigue? These (and others) are challenging questions.  We opted to keep it simple: for a climber to grab a hold, the climber’s hand must first be distinctly away from the hold enough to visually identify space. To make both resting and grabbing definitions slightly more robust, we had two judges come to consensus with the occasional dispute settled by a third judge.

As a way of introducing you to why these measures of climbing are important, climbers in my data grab holds more than they progress up the wall.  Sometimes this is due to replacing a hand on the wall due to resting, but other times it is due to getting stuck and needing to figure out how to get through a crux.  In the research literature, this distinction is sometimes referred to as exploring movement vs. performing movement.  I highly recommend reading Ludovic Seifert, Keith Davids and Dominic Orth on this concept. Other important thought leaders on the intersection of pace and grabbing are Eric Hörst and Udo Neumann.

Here’s an example of two of the top climbers from the data: Jain Kim and Mina Markovič climbing in Haiyang, China.  Jain Kim won. 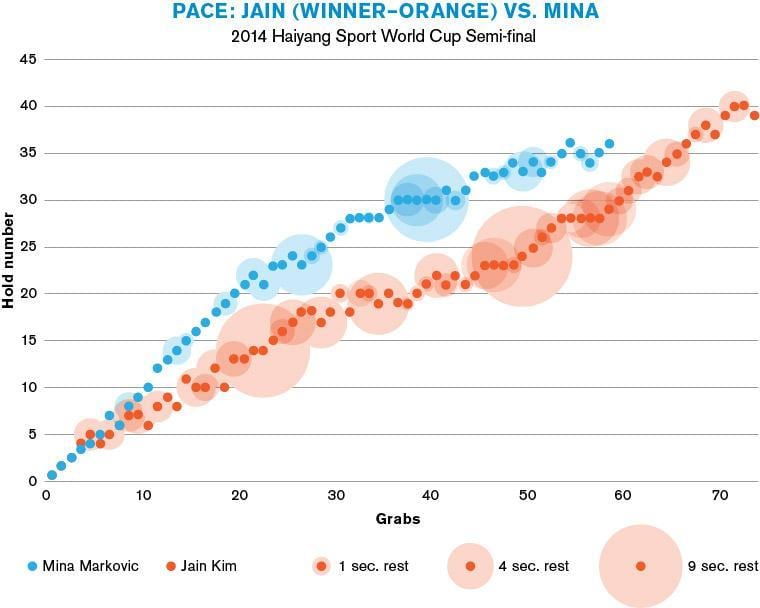 The grab-to-hold pace grows at a relatively even pace as Jain Kim continues her stylistic trend of down climbing to rest and Mina maintains a low grab-to-hold ratio. In other words, the majority of Jain Kim’s excess grabbing occurs because she rests so much: she will often take her hand off to rest and then either (1) place it back on the hold (counting as a grab) in order to (a) rest her other hand or (b) generate toward the next move, or (2) she will keep the hand off the wall before grabbing the higher hold, sometimes using the hand (while swinging in space) to generate momentum to the next hold.  The former tactic increasing her number of grabs, while the latter does not. Drawing your attention back to the graph, the gap between the two climbers closes as Mina levels off at holds 23, 28, 30/31, and 33-36 and Jain pushes past her macro-plateau between holds 18-23, which represent a surprising 31% of her grabs. Haiyang is an example of a climber, Jain Kim, showing a strategic plateau in her grab-to-hold pace that nonetheless comes back for a win.

More specifically, the data from Haiyang suggests that individual variation matters.  In spite of a (mostly) steady strategic grabbing pace, variation between successive data points as well as small clusters suggest Jain’s pace varies more than Mina’s irrespective of her win.  Specifically, her movement style may mean that short down-climbs (to rest) and/or plateauing are not overly problematic for her in onsight climbing and that small fluctuations in greater- or fewer-number of grabs may not be overly detrimental.  Mina’s performance on the other hand appears to excel when plateaus are noticeably absent.  You will see more evidence for Mina’s performance in the longer article on my website when we compare her performance at Kranj, Slovenia side-by-side with her performance at Haiyang, China.

So how do I train this?  Two ways: first I push my climbers to embrace exploratory movement – specifically to learn about and mitigate the consequences.  This might sound counterintuitive, but it’s especially important for onsight climbing.  Second, I teach them tactics to be more efficient with their grabbing during the types of climbing (such as competition or the first time you get on a route) that require significant learning.  Here are a few examples of some of my workouts (more are on my website):

Mitigate inefficiency by training for it: “Grab, Re-position, Grab again”

Try 2-3 grades under onsight ability – For every move, grab your next hold, then either:

—Explore 1 different way of grabbing each hold (best on climbs with large holds), and attempt to move your body off it, then retreat, OR;

—Reverse the move, re-position to new beta, and grab again.

Try 1-3 grades below onsight level. Do all of the following on same climb with 5-10 minutes break in between.

—Try variations where you (a) re-place and (b) don’t re-place your resting hand back on the hold in order to generate movement.

—The Mina: Climb quickly to the top, no rests or pauses allowed other than a quick “flick” of the hand.

—[Un]natural Pacing: experiment with other types of pacing you are not familiar with, and (a) what works for you, (b) what doesn’t work, and (c) what may work if you learn a new skill-set (such as additional local forearm aerobic training, or non-ideal resting positions).

Please note that as with most of the work I do with data, the results are not causative and are meant to be “hypothesis-generating” only.  In other words, the data itself won’t tell us whether anything we see is helpful, only what happened. Additionally, data like this will require more rigorous methods and/or arguments to confirm/deny. 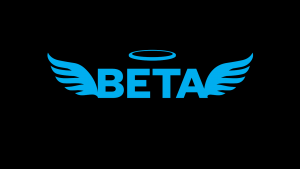 Taylor Reed is a policy analyst who coaches on the weekends.  Taylor teaches Arabella “Belle” Jariel, Ashleigh “LEAF” Kazor, and Charlie “Skittles” Osborne and consults with a small handful of elite kids from half a dozen states.  When not coaching he’s preparing to coach, collaborating with other coaches, and working on his website: www.beta-angel.com.  Taylor is married to a gorgeous soldier named Jennifer, lives in Maryland, South Carolina, and is sponsored by Evolv.