The Push: Tommy Caldwell and Alex Honnold on the Fitz Traverse - Rock and Ice
News +

The Push: Tommy Caldwell and Alex Honnold on the Fitz Traverse

Excerpt from Tommy Caldwell’s new memoir, “The Push: A Climber’s Journey of Endurance, Risk, and Going Beyond Limits”. 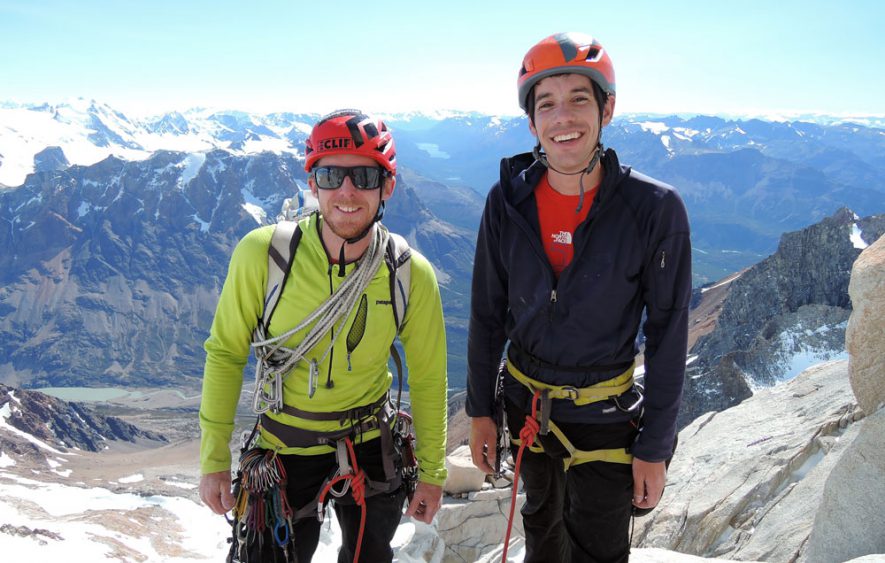 Excerpt from Tommy Caldwell’s new memoir, “THE PUSH: A Climber’s Journey of Endurance, Risk, and Going Beyond Limits”, published by Viking (an imprint of Penguin Publishing Group, a division of Penguin Random House, LLC.) Copyright © 2017 by Tommy Caldwell. 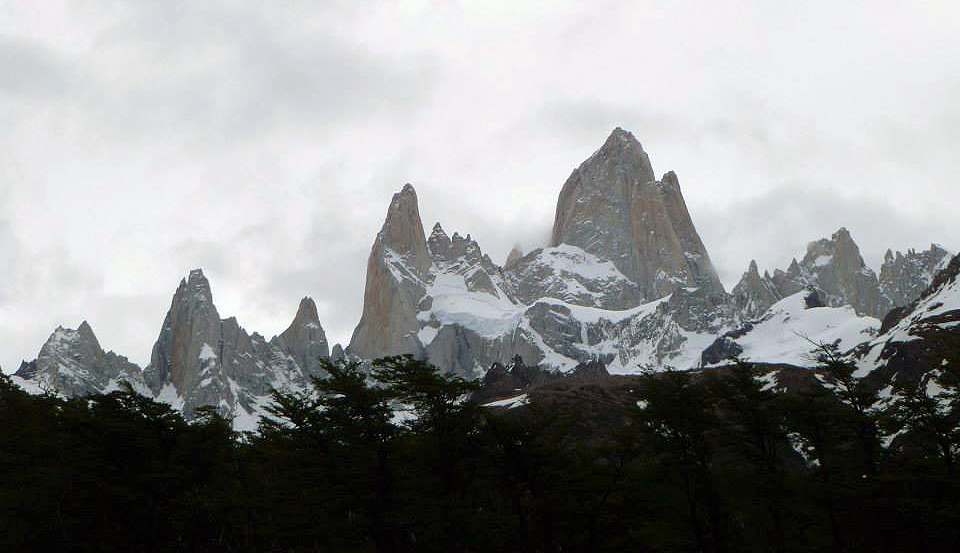 He looked back at me and shrugged. “I don’t know. They don’t look that big to me.” No big deal. If I weren’t so intimidated, I would have laughed. Problem was, Alex was serious.

Ahead rose a series of irregular saw-toothed summits. Climb one face and then rappel down the opposite to begin the next ascent. Up and over and repeat for days on end. Imagine a kind of roller-coaster ride with near vertical rises, pointed crests, and precipitous descents. Adding to the challenge was a virtual absence of horizontal terrain, making bivvy spots scarce.

In some ways, I envied Alex. He didn’t know what lay ahead.

We hiked four more hours, and as the mountains grew closer Alex’s perspective seemed to shift. “Oh, my God, I can’t believe how gnarly those mountains look.” But instead of appearing intimidated, Alex seemed giddy. His eyes widened with excitement.

Another hour later, after a big scree-covered hill, we reached the foot of the glacier. Its bottom margin was steep and icy, so we pulled crampons from our packs. When Alex strapped his on, I noticed something was off. “What the hell,” I said to him, “those are not aluminum strap-on crampons. Those are made to go on a mountain boot. All we have are tennis shoes.” In the equipment list I’d given him before we left, I included specifics about crampons—important, since to shave weight we were going to navigate the ice with lightweight sneakers rather than sturdy boots, a sketchy maneuver to begin with. “How am I supposed to know that,” Alex said with an irritated shrug. “You’re the alpine climber.”

I stared up at the ice-encrusted mountains. When I climbed Fitz Roy in 2006 we’d brought only one pair of crampons for three people (the first guy uses them, then can either pass them down the rope or make the others just deal without them on a tight top rope). Maybe we would be okay. But the mountains had been much less icy then.

We shrugged off the crampon mix-up and Alex climbed the bottom of the glacier by leaping between rocks that had half-melted into the ice. We roped up for protection against hidden crevasses—snow can obscure them with shallow cover, like booby traps—and started wallowing through knee-deep snow.

“I sure am glad you’re the alpine climber, so you have to do all the work,” Alex cracked, as I led the way up the glacier and he followed along in my footsteps.

An hour later, I felt a sudden jolt in the rope and turned around. Alex had disappeared completely into a crevasse. Luckily he had landed on a snow bench just a few feet down, and as he pulled himself out he started laughing, “Did you see that? Whoa. That was crazy.” Then he resumed merrily plodding along.

It crossed my mind that Alex’s amygdala (the part of the brain that processes fear) might be malfunctioning. But I also understood that one of the things that sets him apart is his ability to look at situations logically, while others respond emotionally. After all, we were roped up, so if he fell deep into a crevasse I could just haul him out. Alex never seems rash when he is climbing. Quite the opposite—all of his partners notice this, and you can see it in the videos—he’s methodical and calculated. 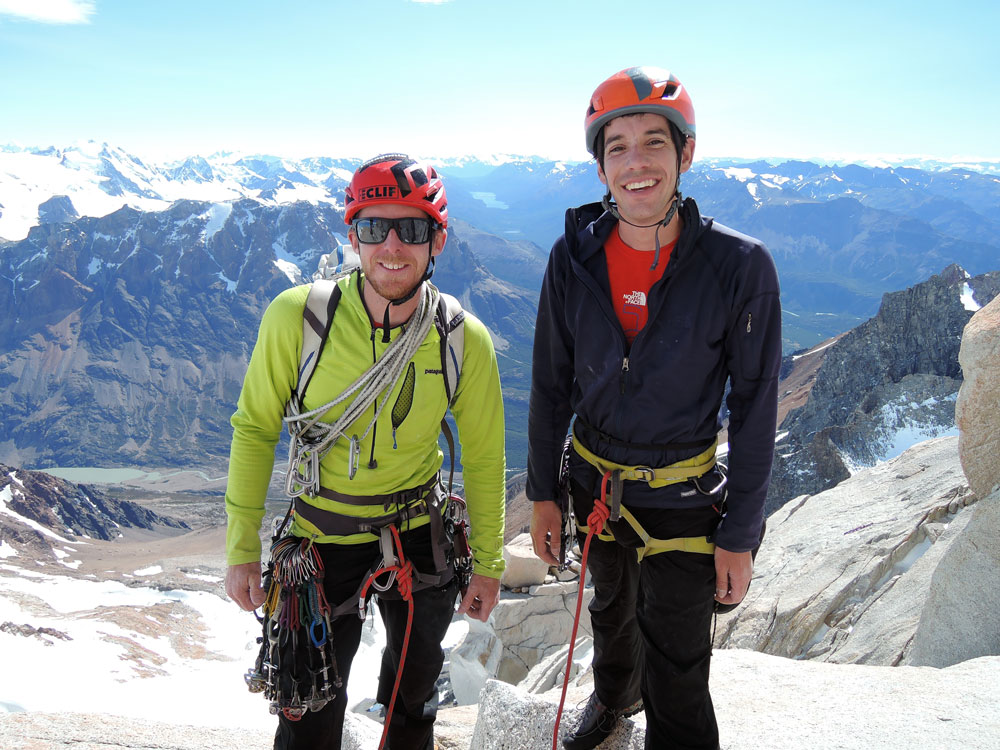 Alex simply doesn’t waste any energy worrying about things he can’t control. Some might call this delusion, or false optimism. Some might go so far as to call it reckless. Alex is the only person I have climbed with who just calls it reality. We analyzed the situations as we encountered them. Start at the beginning; see what happens. And, while we are at it, we might as well have some fun.

We bivvied at the base of the first peak, Aguja Guillaumet. Its rocky, twisted spire reminded me of Lady Liberty’s torch—its summit just as pointed and nearly as small.

As we were about to start climbing in the morning, Rolando “Rolo” Garibotti and Colin Haley passed us. They are two of the most renowned and accomplished Patagonian climbers ever, and were gunning for the same overall objective—the Fitz Traverse. There’s a weird phenomenon where certain climbs fall into the collective consciousness all at once, and multiple parties end up vying for the same first ascent. A massively difficult, unclimbed line suddenly becomes low-hanging fruit.

Rolo and Colin are our friends, and they are true Patagonia gurus—the knowledge they’ve gained through their many ascents in the range, and their willingness to share that knowledge, has helped revolutionize Patagonian alpinism. As they passed, we asked what they thought about Alex’s trying to make the wrong crampons fit.

“I don’t know, sounds pretty dicey to me.” Colin said. Rolo just gave us a concerned look. “Well, we don’t need crampons to climb this first mountain,” Alex said, shrugging. “We know we can rappel without crampons, so we’ll just start rapping if it gets too dicey.”

Rolo and Colin raced ahead. We romped up the first wall, chopping ice from nearly all of the cracks as we went. When the ice was too thick, we ran it out and face-climbed around the cracks.

“Dude, this is pretty snowy,” Alex shouted down, a rare hint of hesitation in his voice. “Yeah, but the weather’s only supposed to get better!” I yelled back. “I’m sure the cracks will dry out as we get farther along.” It was almost as if we were trying to out-optimist one another.

Halfway up Guillaumet, we found Rolo and Colin sitting on a ledge, looking a bit forlorn. “Rolo’s feeling pretty under the weather,” Colin said. “We’ve decided we should go down.” Then it became clear why they had been waiting. “You should take these,” Rolo said, handing Alex his crampons. “I don’t think yours are going to work.”

The Fitz Traverse had been a goal of Rolo and Colin’s for many years. They had made two previous attempts and were potentially giving up their dream of becoming the first to do it. Now they were handing us the tools we needed. In this land of giants, I felt humbled once again. Colin nodded his encouragement and sent us on our way. 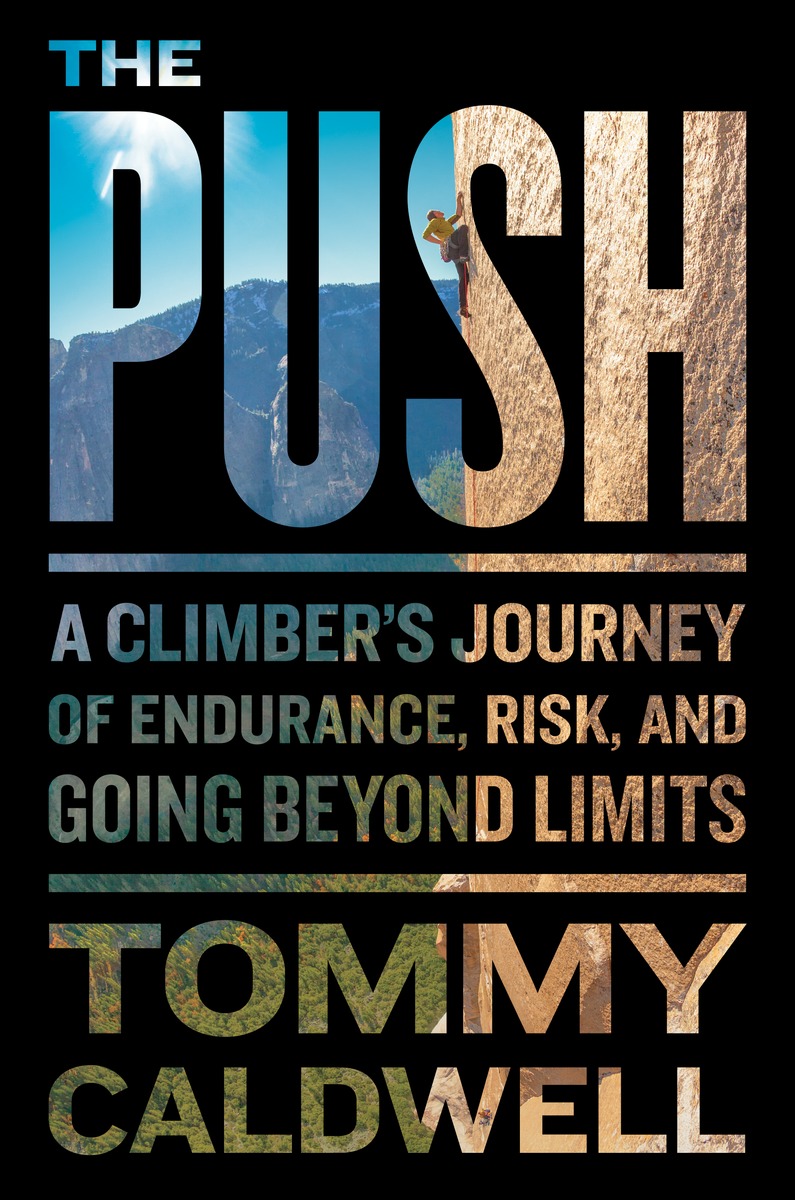 Tommy Caldwell grew up in Colorado. He has made dozens of notable ascents, and many consider him the best all-around rock climber in the world. In 2014 he was chosen as one of National Geographic’s Adventurers of the Year, and in 2015 the American Alpine Club awarded him Lifetime Honorary Membership, its highest honor.

Caldwell, a senior contributing editor for Rock and Ice magazine, lives in the town where he first learned to climb, Estes Park, with his wife and their son and daughter.

His new memoir, “The Push: A Climber’s Journey of Endurance, Risk, and Going Beyond Limits,” published by Viking (Penguin Random House) is available in hardcover on May 16 from penguinrandomhouse.com.

A Line Across the Sky: Tommy Caldwell and Alex Honnold Complete Fitz Traverse in Patagonia