The Pou Brothers Establish “Rayu,” Beautiful 5.14b Multipitch in the Picos de Europa 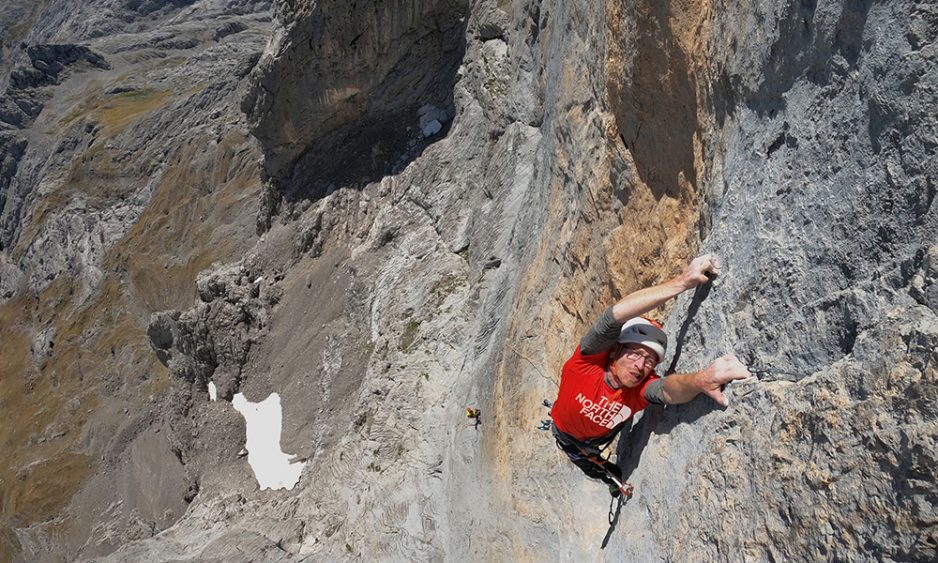 Iker Pou on the crux 8c (5.14b) pitch of Rayu, the new route he and and his brother Eneko Pou established on Peña Santa, the Picos de Europa, Spain. Photo: © Hermanos Pou.

Brothers Eneko and Iker Pou, Basque climbers known for their first ascents in all genres the world over, have put up a challenging new route in Spain after five weeks of intense work.

Along with Kico Cerdá, the Pou brothers made the first free ascent of the 600-meter route Rayu (5.14b/8c) in the Picos de Europa. Protected mostly with trad gear, Rayu is both physically and mentally challenging, according to the brothers.

“We always say, ‘The further the protection, the more fun,’” the Pou brothers told Rock and Ice. The three climbers redpointed the route in one long and demanding twelve-and-a-half-hour push.

Read Rock and Ice’s interview with the Pou Brothers below!

Q&A with Iker and Eneko Pou

How did you get inspired on this face in particular?

From a very young age, both Eneko and I climbed a lot in the Picos de Europa. We have these mountains very close to our home and we have climbed many of the most important routes of our career in this massif.

Until this year, we had always opened or repeated many of the most important free routes on Picu Urriellu, but we had yet to open one in the neighboring Peña Santa. This year we decided to take advantage of the global pandemic and focus on objectives that we had pending close to home.

Since this year we could not travel as much as we are used to, we began to investigate the possibilities of opening something new in Peña Santa. To do this, we contacted Kico Cerdá, who told us that he had several possible lines in mind and that he would love to try to open something new with us. So we got down to work!

In general, it is a fairly technical climb on exceptional limestone rock. The route is divided into two parts.

In the first 300 meters, there is a bit of everything, from very technical pitches to the occasional roof. In this part, the difficulty does not exceed 7b (5.12b), although the bolts and fixed gear are scarce.

After these first 300 meters you reach a very large ledge. From this ledge, the last 300 meters have the greatest difficulties of the route. In general, the route has very few bolts. We tried to open it as cleanly as possible. The average amount of fixed gear per pitch is one or two pieces.

To repeat Rayu, you need two sets of Friends and some stoppers. The upper part is the most difficult and technical, with the crux pitch being 8c (5.14b).

What was the crux pitch like, and what makes it so difficult?

When we got to pitch 11, we were in for a surprise. So far, a fantastic and sustained route in the seventh grade [5.12a to 5.13a]. A true marvel! But we immediately realized that it was not going to be easy to open that pitch—it was really smooth and featureless.

It took a lot of work to find a passage that would allow us to climb this piece of rock free. The pitch consists of three quite blocky sections, all of them with very small grips, the occasional single-finger pocket and very bad and slippery feet. It took us a few tries to figure out the correct sequences and to see that the pitch, with effort and patience, could go free.

Was the route psychologically challenging? what was your strategy for navigating the mental aspect?

As in all our first ascents of this style, we try to open them as cleanly as possible.

When you can protect yourself with Friends and stoppers, we don’t use bolts. So we free climb from below and when we can no longer go on, physically or mentally, and there is no other way to protect ourselves, we look for the possibility of hooking to stop and put a bolt in.

It’s a very mental and fun game. We always say, “The further the protection, the more fun.”

What was your process over the five weeks of projecting? What was the most difficult part of the process?

The process, as usual, was not easy. We started carrying gear (6 hours walking) and took the opportunity to look for a possible line from below.

Then we began to open the route and we were fixing ropes until we reached the big ledge at 300 meters. Once we opened the route up to the ledge, we decided to haul everything we would need to the bivouac and continue opening the upper part.

We stayed for a few days at the bivouac until tiredness and bad weather forced us to go down to rest at the nearest town, Posada de Valdeón.

At the same time that we were pushing the line upward, we were also working out the free climbing on the pitches. Everything felt like it was going quite smooth, until we reached the crux pitch, which was where we had to invest more time and effort.

Once Rayu was opened, we still had to redpoint it. So we rested well and gave it a try from below. We climbed without any problem until the hard pitch. In the first attempt of the hard pitch, I (Iker) fell at the top. It had rained a lot the day before and it was impossible for me to see the small tick marks because they had been erased. There was no other choice but to go back down, rest for an hour in the cold and try again.

This time we were luckier and we managed to pass this spectacular pitch without any falls. The doors to finish the route were open, we only had a couple of laborious seventh-grade pitches left and some easier terrain to the summit.

With the last light we reached the summit, exhausted but very happy to have done the first free ascent of Rayu.

How would you describe your climbing Partnership?

The truth is that we have always climbed together for projects, whether they are big wall, mountaineering or alpinism.

Since we started climbing we have done it together, so we have always thought that it is a great advantage. We know each other perfectly and get along very well, so when it comes to dividing the pitches on a climb, we don’t even have to talk to each other to find out who gets the next pitch.

We know perfectly the strengths and weaknesses of each other. We complement each other well and are a strong and motivated team. There is no rivalry between us—we know that in unity there is strength. It is something that our parents instilled in us from a very young age, to love and respect nature and enjoy life to the fullest.

How was it working with Kico Cerdá?

With Kico we had climbed very little previously, so we weren’t used to working together and this is always a risk in a project like this, which was going to take us a few weeks. In the end everything worked out well and we are very happy.

finally: Any other projects in the works? What do you have your eye on next?

At the moment we are immersed in a project that we call “The North Face 4 Elements,” which is about making four climbs related to: Water, Wind, Fire, Earth.

So far we have done the climb for the element “Wind” with a new route in Patagonia, called Aupa 40 (M7, 85 degrees, 545 meters) on the Guillomet needle.

For the third element, “Fire,” we opened a spectacular route in São Tomé and Príncipe, Africa, that we called Leve Leve (8b+/5.14a, 450 meters).

Our intention was to be able to finish the project in 2020 with the element “Earth,” but due to the global pandemic we do not know if it will be possible this year, so we will probably have to finish in 2021.

We also really want to return to the Alps soon. If possible, we would also like to return to Patagonia, to try to open something. We’ll see what can be done!

First Ascent Of 450-Meter 5.14 In São Tomé And Príncipe By Los Hermanos Pou