The Pandemic and the Interrupted Wanderer - Rock and Ice
News +

The Pandemic and the Interrupted Wanderer

A young climber finds she misses, of all things, the goodbyes. 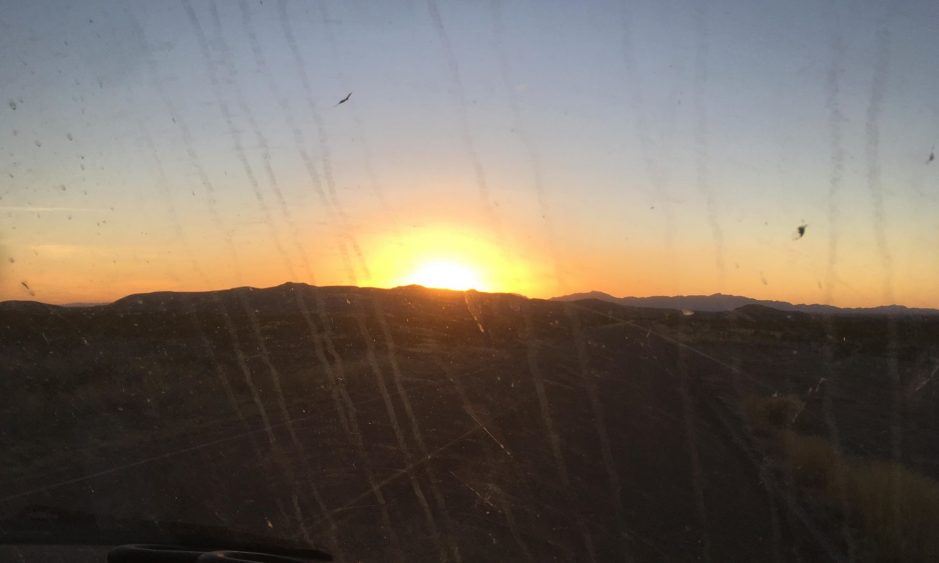 A year ago, I drove away from North Mountain, photographing a yellow-and orange-ringed sunset melting into the horizon through the dirty car window. It was the end of my first trip to Hueco, a spontaneous adventure I’d embarked upon to visit a friend climbing there.

“I feel melancholy,” he said as we drove away from the boulders.

“Saying goodbye to people. It never gets easier. Even if you’ve only known them for a day.”

Now, with the shelter-in-place order, it has been two months since I touched rock. But when I miss climbing, the memories that ache the most are, oddly enough, the bittersweet feelings of leave-taking.

I’ve realized something since then, something that only occurred to me in this state of complete and utter stagnation that is quarantine. In a lot of ways, he was right. It doesn’t get easier. But somehow, at the same time, it does. Saying goodbye allows us to explore new places and meet new people. And the more we say goodbye, the larger and more diverse our world becomes.

Six months ago, at the end of a last-minute day trip to Rumney, several hours from our college, my friend and I looked up at a tiny ledge and considered whether there was enough room for us to climb from there. Three guys were already crowded onto it, working a route. When we hesitated, they waved us over, insisting that there was enough space. We clambered up and started projecting next to them, and by the time the sun went down, we were friends. We ended up leaving Waimea together and getting Thai food. Over dinner we laughed and got to know each other in the easy, effortless way that strangers do. Later we lingered outside the restaurant.

We said goodbye and went our separate ways. Driving away from Rumney that night, I thought of Hueco, of Bishop, of Shagg, of Moe’s—places I have left behind. Old goodbyes blend seamlessly into new ones, and I am reminded of how far I’ve traveled and how far I still can go.

When we wander, we move from somewhere to somewhere else. We leave one place behind, one group of strangers, in part because we know that sometime soon we will encounter another. This creates a continuous cycle of movement, as wanderers traverse the country and the world. The climbing community not only accommodates but welcomes this practice. Climbers eagerly offer beta, spots and crash pads. They share campfires, drinks and songs, or take part in “van life” knowing they will meet others doing the same.

And in this way, the cycle of movement allows each of us, if we choose, a serendipitous existence––something that, in the modern world of linear time and commitment to efficiency, is difficult to come by. Serendipity is anything but linear; we go on new journeys and meet new people, but we often run into old friends, too. We experience the joy of running into old friends in unexpected places, and then we say goodbye all over again, hoping we might find them once more on other adventures.

Three months ago, Bishop. We’d lost a tent in the wind, so we approached the people at the next campsite and asked if they’d seen it. They hadn’t, but they offered up a tent, a sleeping pad, and a sleeping bag. We traded some beers and everyone was happy.

Back to Hueco. A bonfire at the ranch, food trucks everywhere, music thumping. I met a boy who was on a gap year, headed to school in Boston in the fall. We talked about what collegiate climbing was like. A year later, we finally climbed together in Rumney.

Back to Rumney. I was hanging on a line called Aquarius in the middle of the beautiful Waimea wall on a perfect, clear 60-degree day. Someone hanging on Whiptide, one of the next climbs over, said, “Hey, haven’t I seen you in Connecticut?” We knew each other by sight from a local gym.

But now, the cycle of movement, the pursuit of wandering, is interrupted. The constant procession around the country has trickled to a standstill. Wanderers go home, some for the first time in months. Campgrounds and hostels empty out. Plans to meet up in April are forever on hold. My crash pads are at school 3,000 miles away. My rope is stuck in Oregon with a friend I made on the road. And goodbyes, which paradoxically felt easier because I knew there would be more of them, became suddenly much more difficult.

At the beginning of quarantine, I knew I would miss climbing, but I was happy to give it up to help ensure the safety of others. It never occurred to me what would happen to the community as a whole. Can we exist without climbing? Of course. But the world is smaller without it.

Now, I spend my days going on long walks deep into the nearby canyon, occasionally meeting strangers through windows and from their backyards. One woman opened the gate and invited me to observe the landscaping she’d done in her garden. We talked for a while, and I got the sense that we might have been friends under more normal circumstances. I tried to find her house again on the way back, but I couldn’t.

I walk not because I feel particularly cooped up or bored at home, or out of a drive to exercise. In fact, walking for the sake of walking is usually one of my least favorite activities. But when I walk miles and miles, not knowing exactly where I’ll end up or who I will encounter, it feels almost like the existence of climbing. After all, the sun that sets over my backyard every day is the same one that sets in Hueco. For now, that is enough.

Sophie Pollack lives in Los Angeles and grew up in the climbing community, training with a youth team on weekdays and going outdoors on weekends. She is an undergraduate at Yale University, studying Humanities and writing music journalism on the side. She is specifically interested in the evolution of rock music from the 20th to 21st century.