The Flatirons Have a New Hardest Sport Climb: “Made In Time” (5.14c)

Vasya Vorotnikov, first ascentionist of Jaws II—one of just several 5.15s in the U.S.—has made the first ascent of an eight-year-long open project in the Flatirons, Colorado. 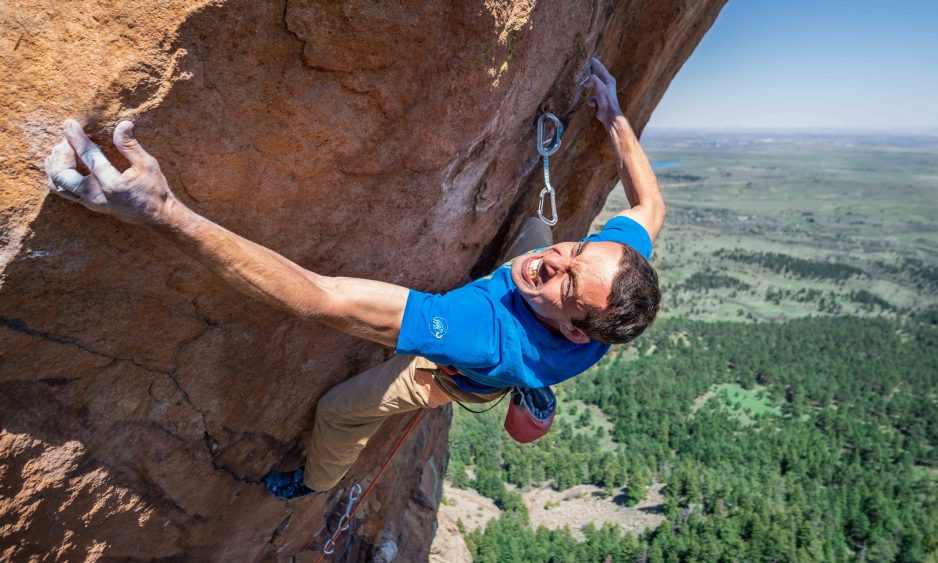 Vasya Vorotnikov on his new 5.14c in the Flatirons, Made In Time. Photo: Felipe Tapia Nordenflycht.

The Flatirons have a new hardest sport climb. On the morning of May 21, Vasya Vorotnikov sent a new route on the Maiden Formation proposed at 5.14c. Named Made in Time, the climb skips the gear placements and traverse of Maiden Voyage (5.12b)—a traditional pitch established by Matt Wilder—and fires up five bolts of intense climbing directly into its finish.

Made in Time was equipped in 2012 by Matt Wilder, who is known for his bold trad ascents. At the time, he had just sent Cheating Reality, a 5.14a gear-protected line on Devils Thumb (another formation in the Flatirons) and was looking for a new project. His search brought him to the southwest arete of the Maiden. Speaking on his find there, Matt said, “I rapped down it and realized there wasn’t enough gear to do it trad style [but] the line was so compelling that I decided to look more into the process of bolting a route.”

Wilder gained approval from the Flatirons Climbing Council to bolt the route and, in typical Matt Wilder fashion, also established another climb on gear that traversed into the finish, becoming what many know as Maiden Voyage.

Wilder worked the bolted line over the next two years. He freed the individual moves but never succeeded in linking the two distinct cruxes. The first entails a V9 boulder problem with reaches between in-cuts, culminating in a tough precision move to a positive slot. After a shake, the second crux begins: a double-digit boulder problem of big moves, compression and heel hooking. The end of the climb eases off to 5.12b, but the overhang and exposure cannot be underestimated.

Made in Time’s difficulty guarded the send from all but the most dedicated. Both Jonathan Siegrist and Shawn Raboutou attempted the climb after Wilder, but neither invested the time needed to piece it all together. It remained a project for almost eight years.

Vasya Vorotnikov said of the new route: “I was skeptical that something Matt Wilder proposed at 5.14+ without crushing it would even be possible, but gave it a try, got giddy and couldn’t think about anything else even as we ventured to other crags. To me, aesthetics, fun movement and personal challenge play a huge role in deciding what’s ‘great’ in climbing, and this one had it all.”

Vorotnikov sent the line after seven days of work, spread over a month. He usually tried the route three times each day. Made in Time is the newest addition to Vorotnikov’s recent streak of project takedowns across the Front Range. In the last year, he has completed numerous long-standing projects, adding new 5.13s and 5.14s to whatever areas he sets his sights on: from Twitch Wall to Highlander, from the Wall of Justice to Lover’s Leap, all in his backyard of Clear Creek Canyon.

Sometimes, you get more frustrated the closer you get. 😬😅 Just gotta keep trying 🤷🏻‍♂️ 🎥 @jakemichelotti

Vorotnikov is no stranger to first ascents. He did the first ascent of one the few 5.15s in the United States, Jaws II (5.15a).

If this wasn’t impressive enough, he also recently obliterated both the partner and individual team scores during the 24 Hours of Horseshoe Hell event with Rob D’Anastasio in 2019. For those familiar with the point system of the event, the two tied for 51,550 points each, a respectable team score by itself. Together, they beat the previous team record by nearly 25,000 points.

Outside of climbing Vorotnikov’s resume is just as impressive. He has been published in Science magazine for his chemical engineering work at the National Renewable Energy Lab.

High Above Boulder: Speed Records on the First and Third Flatirons