The Access Fund has announced its 2015 Menocal Lifetime Achievement Award, Land Conservation Award and Sharp End Awards. These annual awards recognize individuals, organizations, and businesses that "go above and beyond to volunteer their time and efforts to protecting America's climbing." 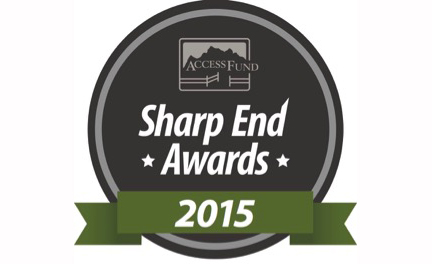 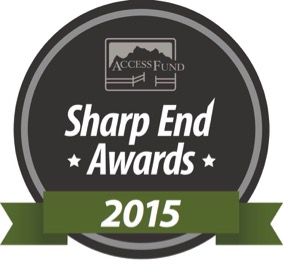 The Access Fund has announced its 2015 Menocal Lifetime Achievement Award, Land Conservation Award and Sharp End Awards. These annual awards recognize individuals, organizations, and businesses that “go above and beyond to volunteer their time and efforts to protecting America’s climbing.”

It is Access Fund’s honor to present Doug Walker with a memorial Menocal Lifetime Achievement Award. We were devastated by the sudden loss of Doug, who made a huge impact on conservation and recreation in this country. He was a leading advocate for connecting people of all backgrounds to the outdoors as a way to build support for conservation. He served on many nonprofit boards, including The Wilderness Society, the Sierra Club, the Fred Hutchinson Cancer Research Center, the Outdoor Alliance, and The American Alpine Club as President. Doug was incredibly generous with his time, expertise, and money. He was an original funder of the Access Fund’s land acquisition fund, and he promoted climbing access and outdoor recreation through his numerous connections in Washington, D.C. He was a great friend to many of us, challenging us with math trivia on steep mountain scrambles and pushing us professionally in our fields to break barriers and be more successful than we ever imagined. Thank you, Doug.

Access Fund is excited to present Truckee Donner Land Trust (TDLT) with a Land Conservation Award for its leadership and commitment to protecting historic climbing areas at Donner Summit. In 2015, TDLT partnered with Access Fund to secure the 400-foot Black Wall, Peanut Gallery, Road Cut, and access to nearby Space and Stealth Walls. Thanks to the broad support of local climbers and outdoor industry partners, TDLT raised over $300,000 in the Save Donner Climbing Forever campaign to acquire and steward the area. TDLT has been a long-time partner with the climbing community, having first protected the Saddle Boulders in 2001 and Billy Mack Canyon in 2005. Thanks, TDLT, for being a great leader in land conservation!

Access Fund is proud to present Jason McNabb with a Sharp End Award for his leadership of the Black Hills Climbers Coalition (BHCC) and his work to preserve and protect South Dakota climbing. As the former President of BHCC, Jason strengthened the organization’s partnership with Access Fund, helped grow its membership, and spearheaded major stewardship projects with land managers like Mt. Rushmore National Memorial and Custer State Park. He continues to serve on BHCC’s board and is very active with its anchor replacement program, updating aging bolts throughout the Black Hills.

Access Fund is honored to present Bentley Brackett with a Sharp End Award for his many years of work to preserve climbing areas in the Red River Gorge of Kentucky. Former President of Red River Gorge Climbers Coalition (RRGCC), Bentley played a critical role in fundraising for the purchases of Pendergrass-Murray Recreational Preserve and Miller Fork Recreational Preserve. His dedicated outreach to the outdoor and climbing industry has built lasting relationships and support for RRGCC’s work and ensured the success of its annual fundraising event, Rocktoberfest. This event attracts many climbers to the region every year and has raised hundreds of thousands of dollars for climbing area protection.

Access Fund is honored to present Kayah Gaydish with a memorial Sharp End Award for her work and leadership as a climbing area steward in North Carolina and the Southeast. We were deeply saddened to lose Kayah last year. Her experience and knowledge as a trail builder elevated the standard of stewardship in the Carolina climbing community. Often in a leadership role, Kayah worked to improve climbing areas like Hawksbill, Rumbling Bald, Buffalo Creek Boulders, and Hidden Valley. She was a board member of the Carolina Climbers Coalition and worked with numerous conservation and community-minded organizations like Southern Appalachian Wilderness Stewards, Friends of Chimney Rock, Appalachian Trail Conservancy, and Wild South. Kayah lived a life of service, and her warm personality inspired others to pick up their tools and do work that made a difference.

Access Fund is proud to present Mike Driskell with a Sharp End Award for his years of stewardship and service in the Red River Gorge of Kentucky. With over a thousand acres of land to steward, Mike has served tirelessly as RRGCC’s volunteer land manager, planning and leading trail work, training the next generation of stewards, building bridges, and making constant road repairs. His leadership at annual events like the Johnny and Alex Trail Day has inspired hundreds of climbers and volunteers and directly benefitted dozens of popular crags at RRGCC’s two recreational preserves. Mike has collaborated with and hosted Access Fund’s Conservation Team on multiple occasions, working alongside the team on trail projects and hosting its regional climbing stewardship training.

Access Fund is proud to present Chris Winter with a Sharp End Award for his role in protecting climbing areas in Oregon and the Northwest. As an attorney, Chris has supported the efforts of Access Fund, American Alpine Club, Mazamas, and local climbers by providing legal and advocacy support for climbing access efforts across the Northwest. He founded Crag Law Center, a nonprofit legal team dedicated to protecting and sustaining the Pacific Northwest’s natural legacy. He has been a key player in efforts to reopen Madrone Wall, and his experience in raptor management has helped balance climbing and resource protection. In 2012, Chris provided critical support to a coalition of organizations and climbers working to preserve climbing access at Trout Creek while protecting Golden Eagles.

Access Fund is honored to present Rose Kenny with a Sharp End Award for her leadership of Rumney Climbers Association (RCA). Rose’s dedicated efforts have helped steward and protect climbing at Rumney, one of the Northeast’s most popular climbing resources. As a former president, Rose expanded RCA’s partnership with Access Fund through stewardship and community events, as well as by ushering RCA into Access Fund’s joint membership program. She worked diligently with the climbing community and White Mountain National Forest to make significant positive amendments to the Rumney Climbing Management Plan. And she worked to protect climbing on the adjacent privately owned Northwest Crags by leading the appraisal process and facilitating the option agreement that gives RCA the exclusive right to buy the property.

Access Fund is pleased to present Upper Peninsula Climbers Coalition (UPCC) with a Sharp End Award for successfully opening AAA Walls in the upper peninsula of Michigan to climbing. The area was closed in 2014 due to liability concerns, and UPCC’s dedicated group of volunteer board members formalized the organization as a nonprofit in order to partner with landowners as a united front for the climbing community. UPCC partnered with a local timber company to secure a recreational lease that reopened the AAA Walls to climbing.