The married climbers ticked the new-age Squamish testpiece back-to-back on the same day! 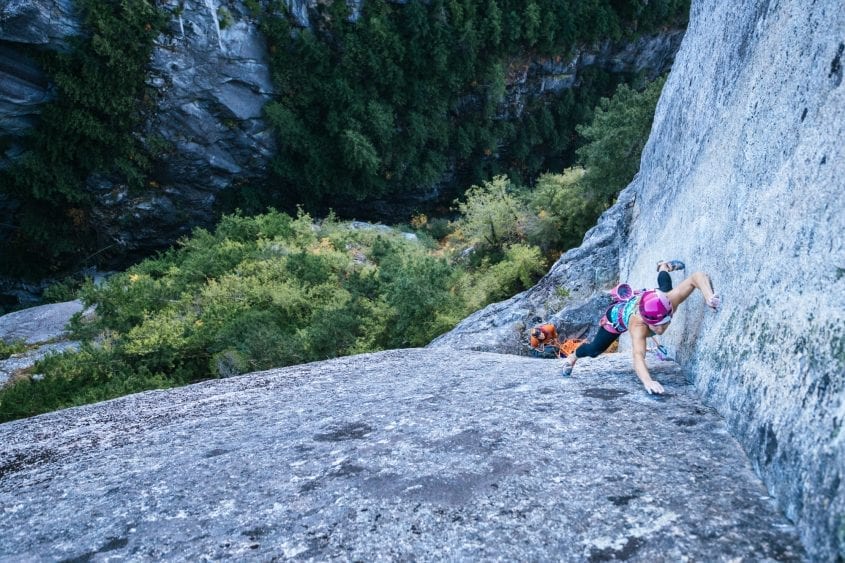 Katha Saurwein and Jorg Verhoeven have been climbing partners for years: the married couple has supported each other on hard single-pitch sport climbs, big walls in Yosemite, and other projects around the world, but rarely have they projected the same route. But earlier this month, on a visit to Squamish, the couple, married since 2015, found themselves focusing on the same line: Tainted Love, a smear-intensive 5.13d R corner protected by an assortment of small gear. Hazel Findlay made the first ascent 2017, and Sean Villanueva O’Driscoll made the second ascent this past July.

“Tainted Love was the first route that we projected together and climbed in a similar time span,” Saurwein told Rock and Ice. “Usually Jorg is much quicker, and finds a new project, while I’m left working on the old one.”

After three days deciphering the faint dimples and ripples they’d need to get up, both Saurwein and Verhoeven started proper redpoint attempts on the same day. And this time Saurwein was the one to send first.

It was Saurwein’s second 5.13 trad climb. She filled Rock and Ice in on the details of her and Verhoeven’s double-send day earlier this week—read the interview below!

Did you know you wanted to try Tainted Love before you got to Squamish?

I did. I saw photos of Hazel [Findlay] on it and was stunned by how amazing it looked.

What about the line attracted you?

It looks so clean and obvious. I was surpised it had been climbed only recently, but after rappelling in the first time, it looked so hard, I could hardly seemed climbable.

Jorg and I had a hard time getting off the ground at first; it felt like we needed to learn how to climb on it. After a while we started to trust the smears and learn the body positions, stemming on one side and walking up your feet on the other side.

Did you guys have to find different beta from one another or did you guys climb it similarly?

We always tried it together. One try Jorg would find out a sequence and then I would try that beta, the next try vice versa. It was great to work the route together, it made it much easier for us as we both learned while watching the other.

At one point we both had our own beta worked out, which was actually quite different, due to our height difference. I had to use closer stems than Jorg and make many more smaller moves. We had a hard time not getting confused by the other’s beta.

What’s the hardest part? Is it scary at all since the protection is pretty small gear?

Tainted love follows an open dihedral with an often-closed crack in the corner and two blank sidewalls. The hardest part was getting used to only stemming and bridging, rather than having a hold to pull on.

Also remembering the beta was tricky. The route looks so similar all the way up that it’s close to impossible to remember single moves, smears and stems without mixing them up. Halfway up, the crack opens up and gives some good gear and a well needed shake, especially for the calves. I don’t think I’ve ever rested my legs more than my forearms like that…

On the actual send go, I had planned to climb from placement to placement to get used to placing the gear, but I felt great, so I just kept on climbing. Jorg was talking to me throughout the whole route, which kept me calm and helped me control my fear. I was so focused on my climbing that I wasn’t really scared, and as I slowly made it higher and higher I found myself up top before realizing what had happened.

Half an hour later Jorg climbed it as well, despite in his own word “messing up all the sequences.” As we sat on the top ledge and enjoyed the sun we couldn’t believe our little project was over, how great of a climb it was, and how we had enjoyed the process.

Yes, we also tried Cobra Crack, by far one of the most amazing lines in Squamish. It was wet the first part of our trip and we ended up spending a lot of time on other projects. Next for this trip is Yosemite, so we’ll have to come back for it!