Supporting Sobriety at the OR Party 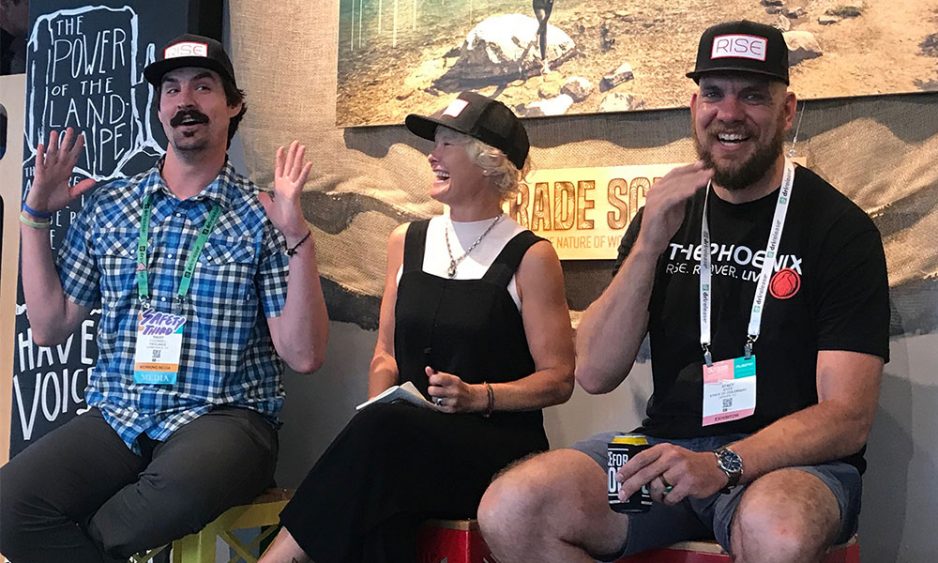 Stacy Bare has faced his share of danger, yet he fled the floor at his first Outdoor Retailer trade show.

“I was less than three months sober,” says Bare, the central character in Max Lowe and Aidan Haley’s new film “Adventure Not War” and a military vet who returned from Iraq to a troubled life of alcohol and drug abuse. In the film he talks about having been suicidal when a mentor “asked me to put off killing myself for a week or two and go climbing with him, and it changed my life.”

Attending the outdoor-industry show several years ago, Bare, of Sandy, Utah, struggled “when the booze started flowing around 3:30 or 4.” The bi- and now tri-annual Outdoor Retailer outdoor-industry event at the end of a day is a place of bonhomie, where many a booth offers beer with cheer.

Bare, now the national program director for The Phoenix, a sobriety-recovery organization, and his friend Shannon Walton of Park City, Utah, an industry veteran in PR/marketing and sales and a wellness advocate, discussed the need to create a place for those who wanted a break from drinking but to network, catch up and have fun at the end of a show day like everyone else.

This year, an Outdoor Retailer website announcement for the Massive Impact Healthy Happy Hour, held 4:00-6:00 on Day 2 of the Outdoor Retailer Summer Market, July 23-26 in Denver, offered “a couple of hours of clear-headed shenanigans and conversation.”

The OR announcement, written by Bare, read:

“Being sober in the outdoor industry can be very hard. Staying sober at Outdoor Retailer can be even harder. … [At] 4:00 or 4:30 in the afternoon each day the trade show can turn into a labyrinth. You dance and dodge around trying to avoid a gauntlet of free and/or cheap drinks (my favorite kind of drinks when I was a drunk). During my first show, I told everyone I had to leave early because I was training for a triathlon. Nobody blinked. … but would they understand sobriety?”

He feels that in the outdoor community, serious issues are often put off to causes such as a trade-show opener, summit day, fundraiser or memorial, and that athletes, sales reps and others can be pressured to have strong presences in bars. The new event, he wrote, arose from the belief that “even if you have a healthy relationship with alcohol, it’s OK to create a space for those who want to take a break, never did drink, are sober, sober-supportive, or sober-curious but still want to laugh, hang with old friends, and meet new ones at the show.”

The Massive Impact (title sponsor) Healthy Happy Hour took place at the Aloft Denver Downtown hotel, an easy-breezy walk from the show. By Walton’s count, 100 attended. On offer were kombucha, sparkling water and hot and cold apps donated by other sponsors and the venue.

Bare adds: “We also heard from a ton of people and organizations that they’d love us to help run a sober happy hour for them, teach them how to be inclusive of sober folks, and help them create other options for their parties.” Previously he has found a disparity when well-intentioned industry people would “talk about inclusivity and then break out a keg and a shot ski.”

Walton says, “A few people asked about addressing [such issues as] pro athletes losing sponsorship when they stopped partying, the deaths in mountain towns, etc. We really didn’t want to go too deep the first time out of the gate and hoped that people would connect and make new friends. … I say, surround yourself with the people that help you shine!”

This writer attended, and coincidentally (or not), while hastening through the show—always a jangle of conversations and happenings—beforehand, passed a booth from which a smiling, curly-haired youth said, holding one up, “Want a margarita?”

The lobby of the Aloft was full and lively, with some merchandise and giveaways, and half an hour or an hour later I hated to leave the conversation with the longtime climbers and industry folks Devaki Murch, Claudia Camila Lopez and Rico Thompson for another obligation. Later posting a Facebook picture, I received a host of comments saying the same thing I’d been thinking: Great idea.

Harrison Hood of Saint Helena, California, commented (this shared with his permission): “Sober climber is almost an oxymoron! 31 years sober on Friday. Got sober and started climbing. Two of the best decisions I ever made.”

The Dawn Wall And Other Great Glimmerings At Mountainfilm