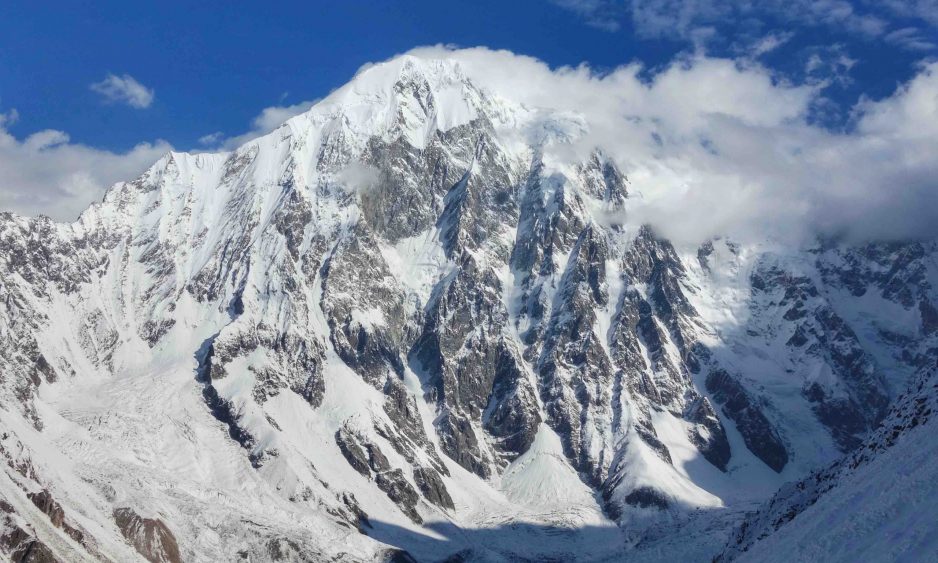 At the beginning of October, Pierrick Fine and I arrived on the Toltar Glacier in Pakistna, where we began acclimatized around our basecamp situated beneath the massive South Face of Sani Pakkush— an unclimbed gem of an aspect.

After two weeks we were ready to give this big face a fair try. Poor weather conditions made us wait a few days more, but the sun was expected to shine for almost a full week following, so we remained optimistic about a good climbing window.

After an early start at 2:00 am from our basecamp on the first day, we met the first difficulties of the climb at an altitude of 5,000 meters. The very beginning of the face had a number of steep ice pitches with sustained difficulties. After that we follow easier terrain, mostly snow and moderate mixed climbing. Then, at around 5,600 meters we reached one of the hardest pitches of the climb, about M4+/M5.

Above this pitch there was only space for a small platform where we spent an uncomfortable night bivying.

On the second day we managed to get considerably higher on the face and climbed two awesome pitches of pure ice. At around 6,200 meters we looked desperately for a bivy spot but found nothing suitable. Finally we were forced to simply sit and lean against some rocks until the the sun came up.

On the third day, massively really exhausted after two bad bivy, we decided to put our tent at an altitude of 6,400 meters on the summit ridge, where we would have a nice and comfortable crevasse to shelter in and recouperate before our summit push.

On October the 19 we decided to head for the summit with almost no gear. We let our bivy in place and started up the final 500 meters of the snowy summit ridge. With a constantly changing snow quality, it became harder and harder to make progress, but after seven hours of work—sometimes digging through powder snow—we reached the top. We arrived on the 6,953-meter-high summit the Sani Pakkush at 2:00 pm, completely exhausted.

We spend our last day descending this massive 2,500-meter face, switching between rappelling and downclimbing. Late on the afternoon of October 20, we made it safely back to basecamp empty of all our energy and lots of emotions swirling in our heads.