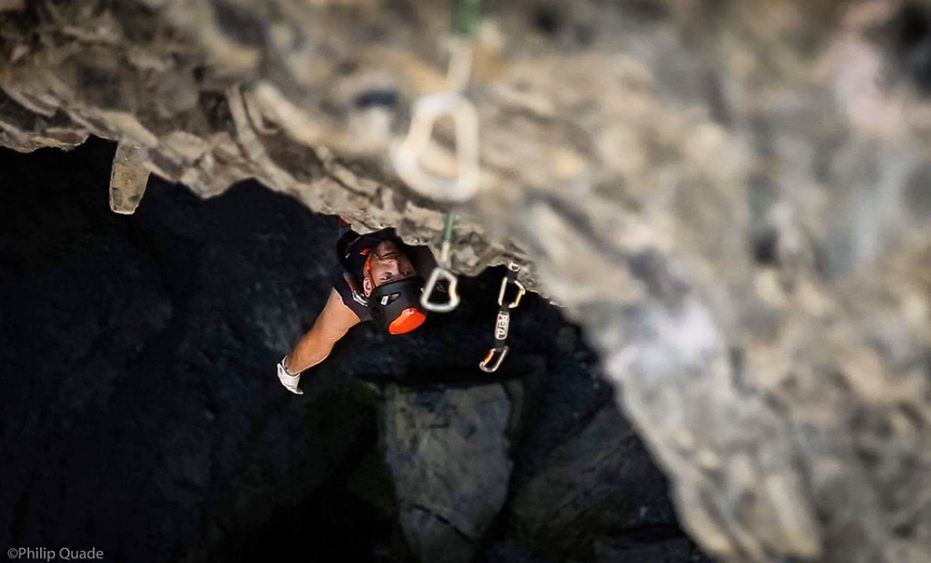 The Canadian climber Gord McArthur has established the most-difficult dry-tooling route in the world—and first ever D16—named Storm Giant in British Columbia, Canada. The climb involves around 80 meters of steep cranking, with over 50 bolts, out the underbelly of massive cave. Between cleaning, bolting and working the line, McArthur spent three years on the project.

“For the longest time the route scared me. The sheer size intimidated me, and then of course the fear of what if—what if it was impossible (for me)?” he writes Rock and Ice. “But every time I’d show up, I’d stare at the line and get so fired up. From start to finish, the movement, the excitement, the physicality, although overwhelming, was so awesome. Every time.”

McArthur, 37, first learned of the cave when a friend of his sent him a photo. It was “the wildest cave I’ve seen in a long time (if ever in Canada),” McArthur writes. They went to check it out right away, and “instantly I knew this was where the biggest route in the world would reside,” he writes. “The line just lit up to me. And without skipping a beat, the work began.”

Raising a Giant – McArthur had his work cut out for him. The cave was a massive chosspile, like most drytooling crags of no interest to rock climbers. Add in the difficulty of bolting a roof, through 80 meters of choss, and the task would seem all but impossible.

“Never has anything I’ve ever done taken so much effort,” McArthur writes. “Hundreds of hours—cleaning and bolting, blood, sweat and tears. Most days it felt like I would get nowhere. But, alas, time after time, slowly but surely, I’d make some progress towards the anticipated ‘chains.’” Two years later, a giant was born.

A roof climb this long would not only require strength and endurance, but also mental fortitude to pull through 90-plus upside-down moves that demanded all types of technique. That, and “a willingness to hold on forever,” McArthur writes.

“Staring at the first draw, mentally you need to turn it up, because there are 50-plus more to go,” he writes. “And with over 80 meters to move through, your movement needs to be clean, precise, and dialed. Efficiency is top priority.”

When he wasn’t cleaning, bolting or attempting moves, McArthur was putting his time into specific training. “I would train endurance ‘til I felt like puking. I would work on finger strength to build more grip power. And of course, I would spend as much time on the route as possible,” he writes. “Every other style of climbing that I love needed to be put aside so that all my energy was devoted to this style: upside-down, gymnastic climbing that would go on forever.”

Slaying the Giant – Doubt often crowded McArthur’s will to believe that he’d send the rig. “I would try and fail over and over,” he writes. Eighty percent of him thought that the route seemed impossible for him to climb, while the other 20 percent that lingered, he writes, “believed that the impossible was meant to be smashed.”

McArthur cannot remember how many attempts he threw at the climb. When he started to really go for it, he writes, he would only have one go in him per day, since the 80-meter route took almost an hour to climb. On August 17, after a 45-minute battle, he finally slew the giant—the Storm Giant.

“Naturally, many want to know ‘what grade.’ I avoided this topic for a long time. Any time you suggest a new level you expose yourself, and that can be an intimidating world,’ McArthur writes. “But inevitably at some point you have to call it out.”

“I had to be bold with my suggested grade of D16,” McArthur writes. “The Storm Giant is longer, filled with a mix of everything … I gave the grade but this year, this route became so much more than a grade. It became more so about me pushing myself further than ever before.

“And finishing it. I’m not a good finisher. So… this became a journey of commitment and belief.”

Check out the teaser of his ascent:

This is the moment I had dreamed of for years. Pushing to my absolute, and then pushing harder. It still seems so surreal, knowing I defeated the giant. So many thanks for all those that kept the Faith, all the belays, and of course the unwavering encouragements. My family, friends, coach, all of you…we did it. @philip_quade put this short clip together, capturing the emotional ending. @petzl_official @scarpana @outdoorresearch @clifbar @wigwamsocks @stokecoldpressedjuicery @highcountrysports