Sherpas on Denali: First Nepalese Ascent of the West Rib

Nine Nepalese climbers traveled to Denali this season, and of those, eight reached the summit—five via the West Buttress, and three via the West Rib. Two, Nima Tenji Sherpa and Tashi Sherpa, summited twice within three days. 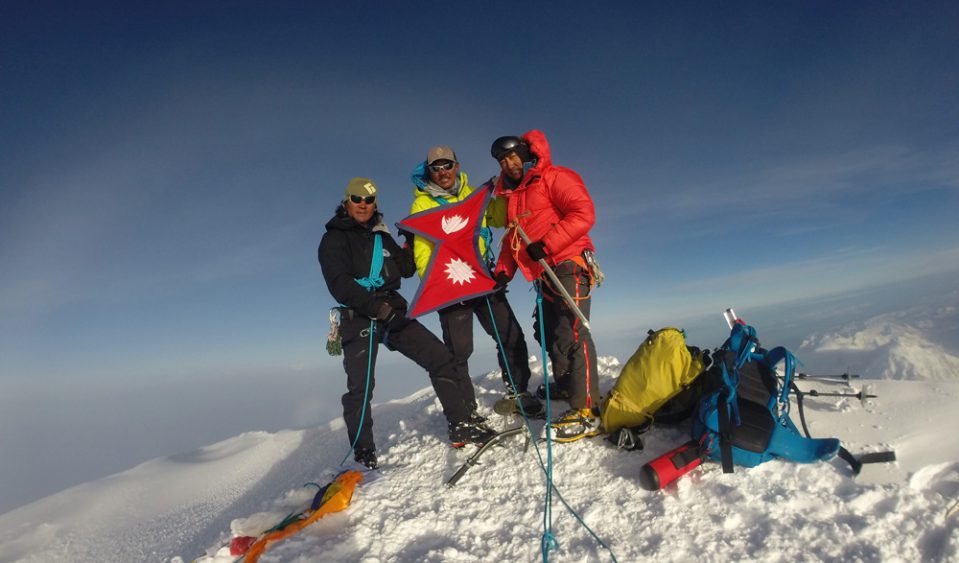 For three days straight, it snowed. Nima Tenji Sherpa, Tashi Sherpa and Tenzeeng Sherpa spent their hours shoveling snow at 4,320 meters. The had established Camp 3 on Denali’s Cassin Ridge in Alaska but could not find a break in the weather to push higher.

On June 20, their fourth day at Camp 3, they decided to continue with their plan despite the constant high winds and heavy snowfall. They would descend the lower West Rib to the Northeast Fork of the Kahiltna Glacier, climb the Japanese couloir to the Cassin Ridge and on to the 20,310-foot summit of Denali—the top of North America.

At noon, the three Sherpas left camp and post-holed through deep snow. Visibility was poor and the going was slow. The weather had deteriorated further by time they reached the crest of the West Rib, five hours later, and they decided to bivy for the night.

Nima Tenji Sherpa, the designated team leader for their Denali expedition, which they dubbed “Sherpas on Cassin,” had summited Everest six times and holds an NNMGA climbing guide certification. Tenzeeng Sherpa is a NNMGA certified guide as well.

For all three, it was their first time to the United States, and it was Tashi’s second time outside of Nepal, after a trip to France. The Nepalese climbers funded their expedition out of pocket.

“It is expensive but money is not a big deal,” says Tashi Sherpa. “It’s more important to travel and learn new cultures and skills so we can return and share the knowledge.”

On the morning of June 21, they descended another 300 meters towards the Northeast Fork. But due to the high risk of avalanches, team leader Nima Tenji Sherpa made the call to abort their attempt on the Cassin, and they switched their objective to Denali’s West Rib.

They returned to the West Rib and climbed to an altitude of 4,800 meters, where they found an icy ledge next to a large boulder to protect them from the 40 to 50 mile per hour wind that night.

“We waited for good conditions but realize there was no good condition and start to climb at 1 p.m. [on June 22],” says Tashi Sherpa. “We were determined to make a summit push.”

After fighting strong winds for nine hours, the Sherpa team reached the summit of Denali at 10 p.m., 12 days after arriving in Denali National Park.

“There were hundreds of people on Denali but no one want to summit that day because of bad conditions,” Tashi Sherpa says. “But it was okay, we went anyway. It was not a problem.”

They spent 30 minutes on the summit before beginning their descent in the last light of a northern summer day.

On June 25, Nima Tenji Sherpa and Tashi Sherpa joined two fellow Sherpas of the “Beyond the Himalayas” expedition team for a second ascent of Denali, this time via the West Buttress. Everyone was safely down to basecamp on June 27.

A total of nine Nepalese climbers traveled to Denali this season, and of those, eight reached the summit—five via the West Buttress, and three via the West Rib (Nima Tenji Sherpa and Tashi Sherpa summited twice within three days).

Tucker Chenoweth, Acting South District Ranger at the Talkeetna Ranger Station, presented Nima Tenji Sherpa, Tashi Sherpa and Tenzeeng Sherpa each with a stamped letter declaring them the first Nepalese climbers to reach the summit of Denali via the West Rib.

“We’re not thinking only Everest anymore,” says Tashi Sherpa. “Everest has so many summits already. We want to explore new mountains and learn new skills so we can come back and share the knowledge.

“We love the Himalayas, but the younger generations [of Sherpa] are not as interested in the mountains anymore. We want them to see our names in history and say ‘that was my father,’ or ‘that was my friend,’ and be proud and inspired to climb.”