On October 28, Mingma Gyalje Sherpa stood on the 6,685-meter summit of Chobuje, alone, via the West Face. He climbed for Nepal, for Nepalese climbers, and for his father. Mingma had successfully forged a new, difficult route to the summit, but it was the descent that nearly cost him his life. 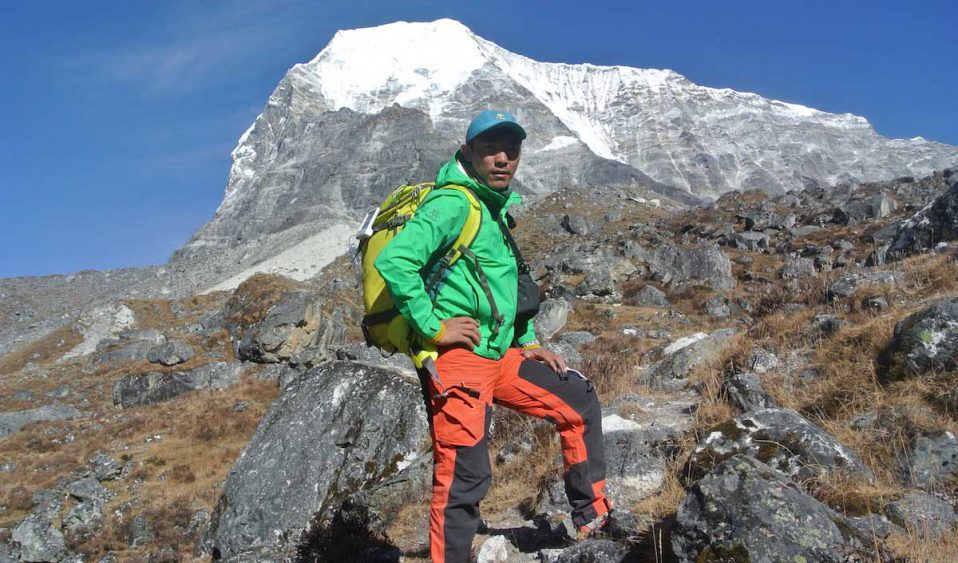 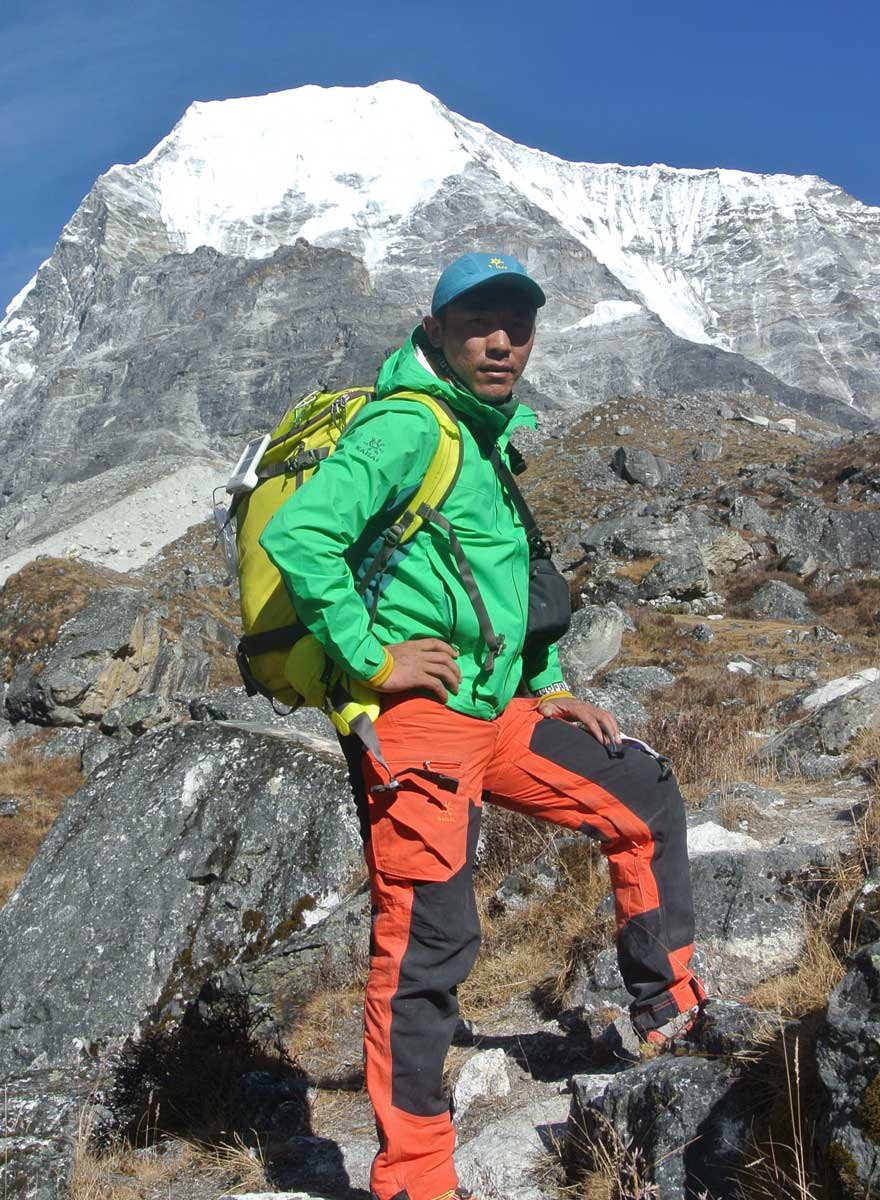 Mingma Gyalje Sherpa was born in the shadow of Mt. Chobuje in the Rolwaling Valley of Nepal. He grew up under the mountain, staring at its snow-plastered west face. When he left home and became a certified guide under the Nepal National Mountain Guide Association, the mountain never faded from his memory.

“Whenever I go back to my birth place,” Mingma says, “I see it so close and so attractive.” For three years, he contemplated a solo ascent of Chobuje’s unclimbed west face. “This year,” he says, “I set my mind and I made my attempt.”

On October 28, Mingma stood on the 6,685-meter summit of Chobuje, alone, via the West Face. He climbed for Nepal, for Nepalese climbers, and for his father. Mingma had successfully forged a new, difficult route to the summit, but it was the descent that nearly cost him his life.

Mingma Sherpa received a climbing permit for Mt. Chobuje from the Nepal Department of Tourism on October 12. Three days later, he began his trek into the mountains. “I had good weather during the trekking,” Mingma says. On October 25, he made a pit stop to summit 6,187-meter Mt. Pharchamo with a team from Austria, Slovenia and Italy. “The next day I trek back to the village and prepared my gears for the solo climb,” he says. By October 25, he was at the base of Chobuje.

“I made my plan to attempt [the summit] on the full moon day,” Mingma says, “but one of the elders from the valley suggested [that I] attempt on the second day of the full moon, because it’s more visible ‘till morning.”

It was a full moon the night of October 27. At 4 a.m., the next morning, Mingma left base camp. “Once I touched the snow part, my hard times started,” he says. “This [was] the hardest mountain I ever climbed. The only thing in my mind was one mistake means my life. 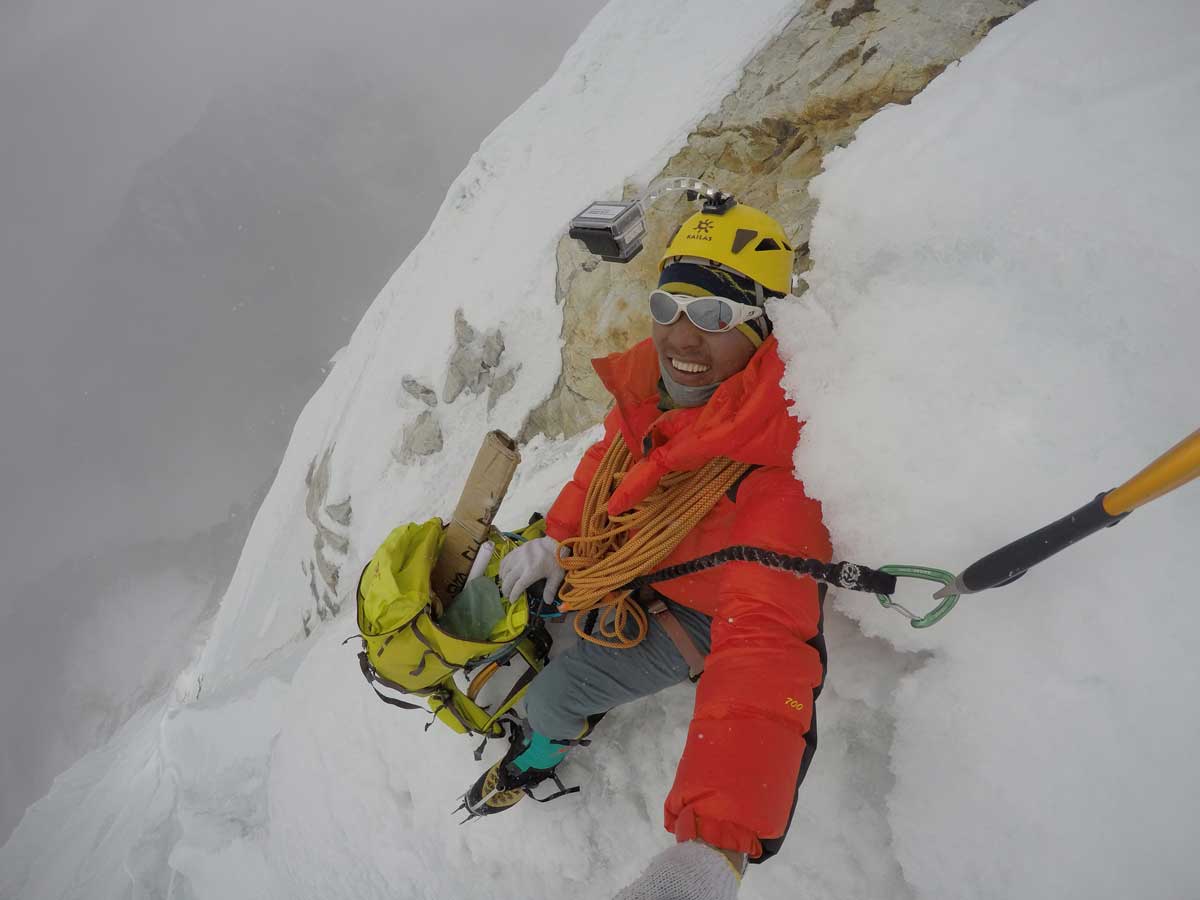 “[The] more I climbed up, I felt more scared looking down.”

The steep face and snow-covered ice prevented Mingma from being able to rest, except for a few precarious stances kicked into the headwall. After 13 hours of continuous climbing, he reached the summit ridge. He says this was the most important moment of the climb for him since he finally felt safe—he planned to descend the easier, and safer, South East Ridge after reaching the summit.

“Once I reached the summit it started getting cloudy and became whiteout at once,” Mingma says. After taking a few photos on the summit, he began to descend and got lost in the whiteout. With near-zero visibility, Mingma decided it wouldn’t be wise to continue until conditions improved and dug a “snow hole” to wait out the storm.

“Waiting and waiting, next day began,” he says. “[All] night I had to rub my body and waited for good weather.”

Conditions hadn’t improved by morning and Mingma called for a helicopter rescue, but the weather was terrible all over Nepal and rescue by helicopter was not possible. At 11 a.m., the sky lightened and Mingma took it as an opportunity to descend. He rappelled 120 meters before the storm socked in again.

“I fall down an ice cliff while trying to descend so I felt not safe to descend further in such bad weather,” he says, “so I traversed 10 meters to where I made my home for the next night.” While traversing, an avalanche almost ripped Mingma from the mountain. 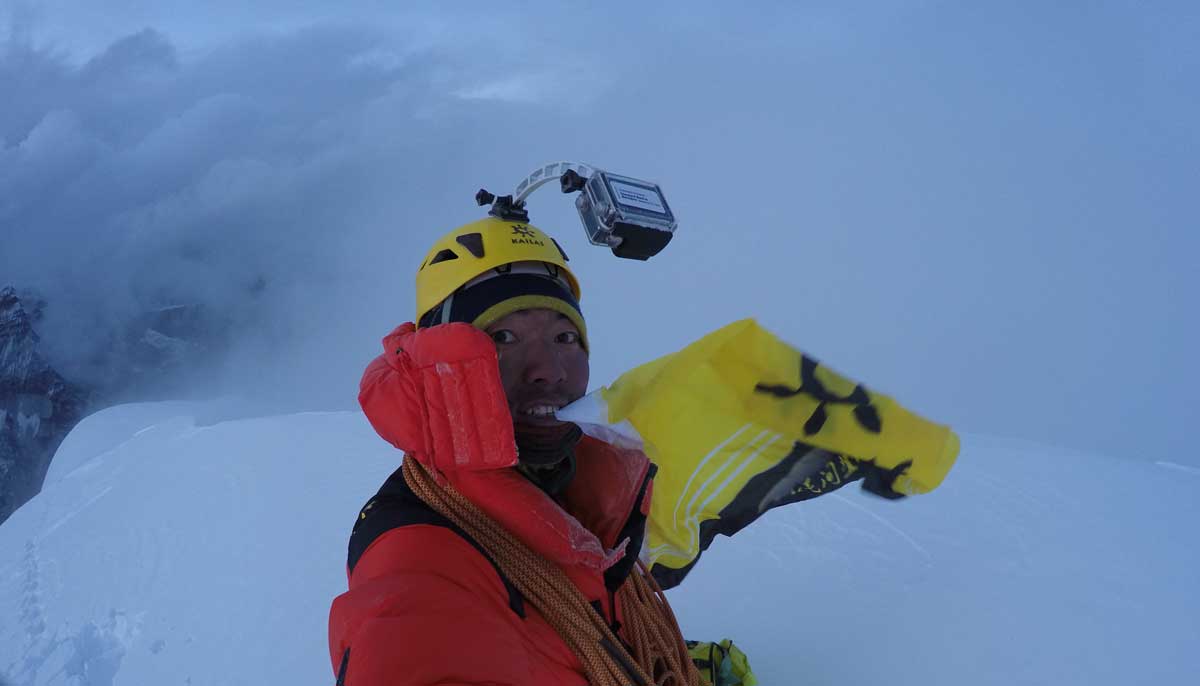 He waited out the rest of the day and into the night, “with nothing and doing nothing,” he says. “The night was threatening cold and windy. I kept on watching my watch.”

At 3 a.m. the sky cleared, raising Mingma’s hopes of rescue. But in the early morning light, clouds rolled back in. “I didn’t have hope for helicopter rescue on that day too,” Mingma says. A helicopter and Mingma’s brother and friends were on standby in the valley below.

Fortunately, conditions improved and the heli was able fly. It reached Mingma’s position on the mountain at 8 a.m., but unable to land, it had to fly back without Mingma.

“My mother, sister and friends [were] waiting at home. Once we landed at the door, all came to me crying, which I felt not good [about] because it was my fault of going solo on such difficult mountain.” 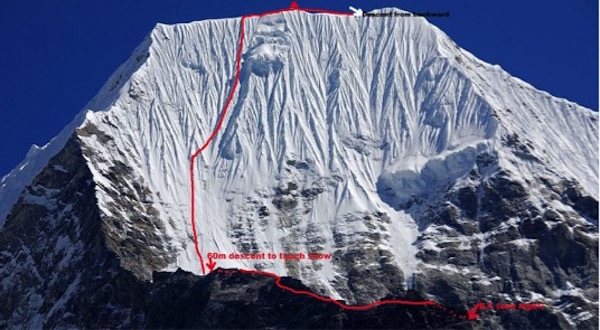 the recent Himalayan first ascents done by his friends—and Rolwaling Valley natives—Nima Tenji Sherpa, Tashi Sherpa and Dawa Gyalje Sherpa, as well as his own first ascent, Mingma says: “We took a step so that Nepalese climbers can step forward in future days.”