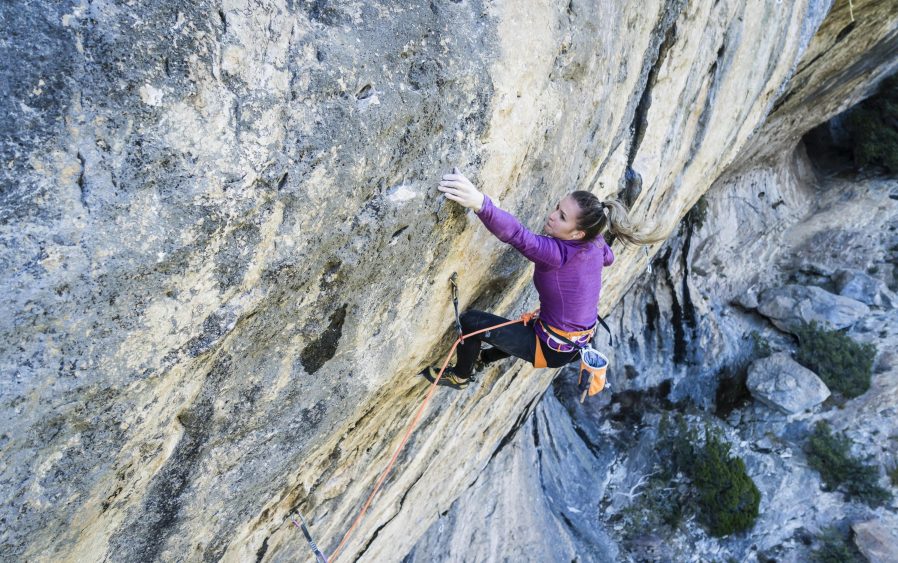 In March last year the 21-year-old climber broke into the 5.14d grade by ticking Ground Zero at the Tetto di Sarre in the Aosta Valley, Italy. She then went on to have an extremely successful competition year finishing in the top 10 at seven of 2017 IFSC Lead World Cup events, including taking bronze in Wujiang, China. She is currently 4th in the IFSC World Rankings for lead climbing and France’s top female lead competition climber.

“Since the beginning Mollasse’son inspired me a lot,” Chanourdie told Rock and Ice. “This beautiful line is about 45° overhanging and even steeper in some sections. It’s kind of bouldery in the sense that the route is divided between a really demanding section (resistance and finger strength) and a pretty bad rest. Actually, it took me a while before even sending the first section, which people estimate to be a good 7C/7C+ boulder problem.”

The main obstacle for Chanourdie was fitting in visits to the crag, which is a considerable distance from her home, to work on the project.

“As the weather got better and better I finally give myself the chance to [go to] Mollans three times within two weeks. It was getting closer and closer. [As] soon as I realized that I could possibly link all those resistant sections together I finally sent Molasse’son. I still have this sensation of ‘mastering the route’.”

Despite being a competition climber Chanourdie enjoys being outside on real rock and loves challenging herself and progressing on hard routes:

Chanourdie is also branching out his year to compete in some of the bouldering World Cup events. Last weekend she climbed in the first bouldering World Cup of the season in Meiringen, Switzerland, and next weekend she will head to Moscow for the second. She is also considering competing in speed events in addition to the full lead season.“Yeah it’s getting more and more real and I’m hoping to compete in 2020,” says Chanourdie when asked whether she intends to compete in the 2020 Olympics. “Progressively I’m starting my training in all disciplines.”