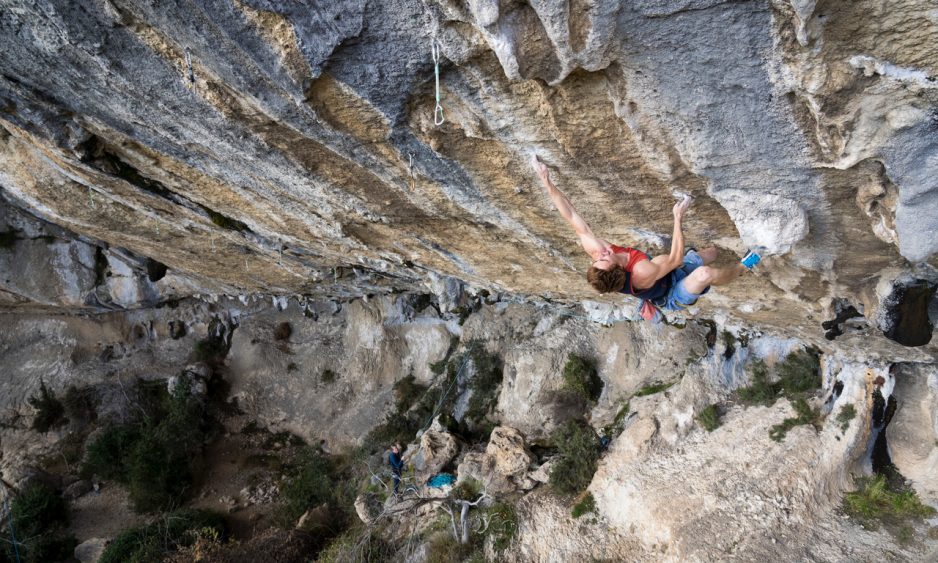 The French climber Séb Bouin has spent a good deal of time working on super-long climbs in the Hanshelleren Cave in Flatanger, Norway since his first trip there in 2013, and that prepared him perfectly to complete his newest first ascent Les Yeux Plus Gros Que L’Antre (Eyes Bigger than the Cave) in Russan, France. The route was so uniquely long that Bouin had taken to calling it the “French Chilam Bilam,” after the famous route established by Bernabé Fernández in Villanueva del Rosario, Spain.

Bouin did the first ascent of the 70-meter route yesterday, April 3, and reports in an email that the route is “one of the best in France.” He had been working hard on the route since he first saw it, at which point, he writes, “I knew it was for me.”

The route climbs an approximately 25-meter intro extension into an older, 50-meter route called Les Yeux Plus Gros Que le Ventre (Eyes Bigger than the Belly). The first part tackles the bottom of the cave which the second half avoided.

Bouin explains that the first 25 meters contain a “bouldery crux on one finger pocket to reach [a] rest. Until here it could be 8c [5.14b] route.”

The route finishes up with “incredible moves” culminating in a dyno to a tufa. “I fell 4 times on this dyno,” Bouin writes. But when he finally stuck it, he managed to hang on through the “last, crimpy boulder.”

When he finally sent the route, he decided the name Eyes Bigger Than the Cave felt the most appropriate given the name of the independent upper route and the fact that the new link-up tackles the entire, yawning cave.

Bouin thinks his new line merits a 9a+/b rating in light of his experience on similarly graded climbs. He made the third ascent of the 80-meter Chilam Bilam, the consensus grade of which has settled at 9a+/b. (The other ascentionists include the aforementioned Fernández, Dani Andrada, and Adam Ondra.)

Should the grade stick, Les Yeux Plus Gros Que L’Antre would be the fourth hardest route in France behind CRS (9b/5.15b) and Eagle 4 (9b)—both Adam Ondra first ascents—and Akira (9b), an unrepeated route established by Frédéric Rouhling in 1995 that caused a considerabe hubbub and controversy in the climbing world when Rouhling proposed the unprecedented grade of 9b (skipping the 9a+ grade entirely).