Hazel Findlay established the trad testpiece in Squamish, British Columbia, Canada, during the summer of 2017. 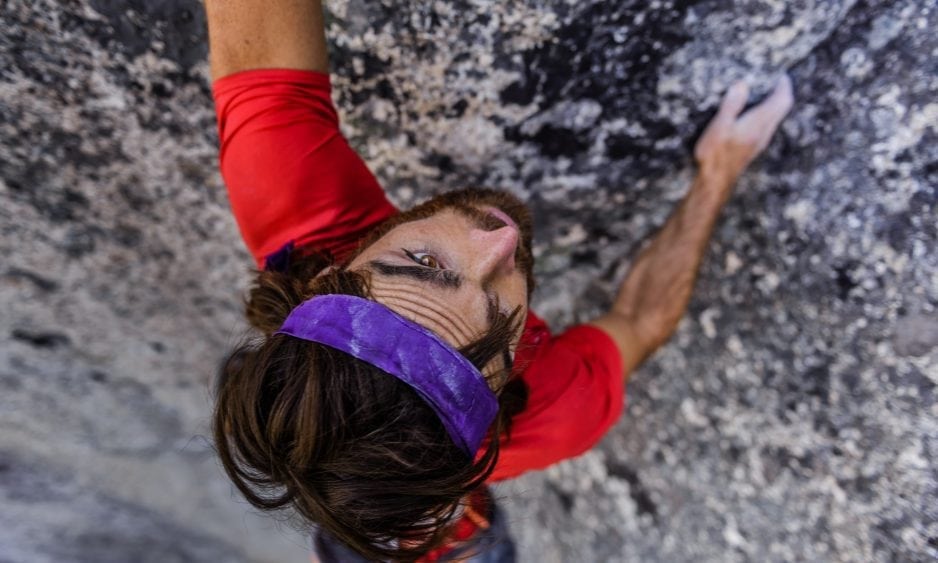 Hazel Findlay’s new-age stemming testpiece, Tainted Love (5.13d R), in Squamish, is only about a year old, but it’s already a draw for those visiting climbers who can wrap their minds around the heady grade. Nalle Hukkataival came away with a no-fall toprope burn on the rig back in May, and now Sean Villanueva O’Driscoll reports that in July he snagged the second redpoint of the route.

The most impressive bit? It was the Belgian climber’s first lead attempt. He is quick to point out that it was not a flash, however: he had checked the moves and gear placements on a static line the day before. “On a climb where every millimeter counts and where the gear is fiddly and hard to place it makes a big difference,” he told Rock and Ice in a Facebook message.

Tainted Love ascends an obtuse corner near the top of the Chief, and is protected almost exclusively by micronuts. Access is via rappel, at which point one must magic his or her way up the virtually hold-less granite, palming with a hand here, smearing with a foot there, creating opposition using whatever purchase one can find.

The line first blipped onto Villanueva O’Driscoll’s radar when Findlay told him he should check it out, knowing her Belgian friend was a lover of blank corners. “I seem to be drawn to dihedrals,” Villanueva O’Driscoll wrote to R&I. “I don’t know if it’s from all the cycling that I used to do when I  was a teenager that gave me strong legs for dihedrals, or if I just have a good feeling for them or if it’s just because I climb a lot of them. They’re obvious lines and I love when there are no holds. You have to be very creative and move with a lot of feeling. It’s not so much about pulling, more about pushing.” When he saw the video of Findlay sending, he was sold, and decided to make a detour to Squamish before a summer trip to the Cirque of the Unclimbables, in Canada’s Northern Territories.

As noted, Villanueva O’Driscoll worked the moves on a fixed line on a sunny day in July. Despite the baking rock, he felt surprisingly good on it. He rustled up a partner—a young fellow-Belgian named Florian Gourgue—to belay him for some proper redpoint attempts the following day. After they had bothed rapped in and pulled the ropes, Villanueva O’Driscoll recalled Gourgue joking, “Well I hope you can climb up this thing or else we’re stuck here!”

Villanueva O’Driscoll started up and found himself in the perfect state of mind. “I climbed flawlessly, executing every move perfectly, making no mistakes. It was one of those magical moments when all the stars align… Before I knew it I was topping out and I let out a big scream. It was like a dream!”

Moments and days like those are rare, even for climbers of Villanueva O’Driscoll’s caliber. Evidently it was a low-gravity day for him: “I later went back to get some pictures on it and it felt harder!”

Tainted Love is the most recent addition to the varied and impressive resume that Villanueva O’Driscoll has been compiling over the past decade. With fellow troubadours Nico Favresse, Oli Favresse and Ben Ditto, he has made two first-ascent expeditions to Baffin Island, captured in the ReelRock shorts Vertical Sailing Greenland and The Dodo’s Delight.  With Nico Favresse and Siebe Vanhee, he also made the first free ascent of El Regalo de Mwono (VI 5.13b), on the east face of the Central Tower of Paine, Torres del Paine, Chile.

After her first ascent of Tainted Love, Findlay wrote, “Some people I chatted to suggested I place a bolt or two, ensuring that at least some people would repeat it. I’m not necessarily against bolts on trad routes but the Brit in me could see that this was a better challenge without the bolts. I wanted to leave it as a pure trad challenge and if people wanted just the physical challenge then they could easily top rope it.” Those people clearly needn’t have worried: her decision has not deterred those with the chops necessary for such a beaut.

Watch Hazel Findlay on the first ascent of Tainted Love

New Route In Patagonia By Vanhee And Villanueva O’Driscoll

VIDEO: Sean Villanueva O’Driscoll on Mother Of The Beast