Another Ouray Ice Fest is in the books and the competition route was one of the coolest we’ve seen. 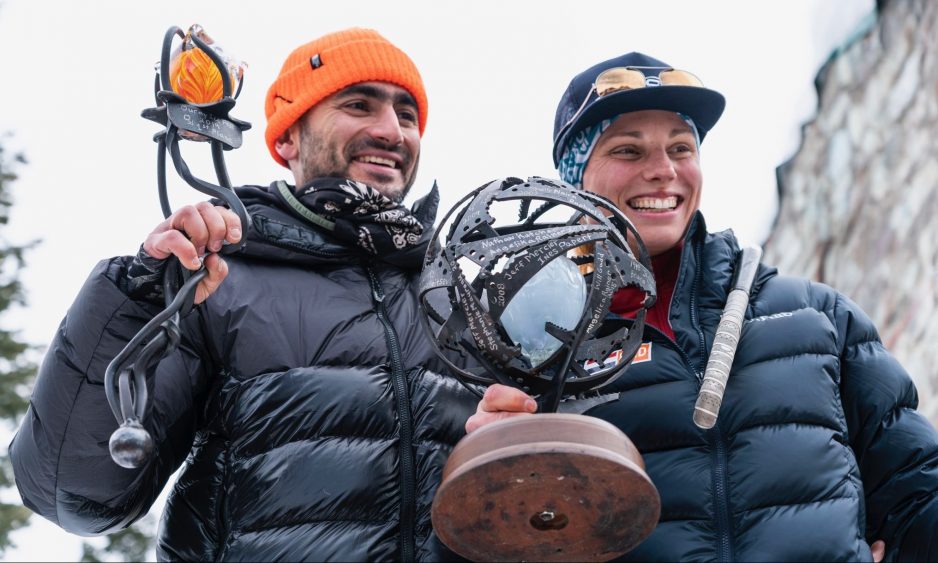 This past Saturday morning, with a high for the day of 35 degrees, athletes from around the world strapped their crampons onto their ice boots, and exhaled white breath into the freezing air: the 2019 Ouray Ice Fest and all the competitive goodness it brings had begun.

Featuring men’s and women’s mixed climbing competitions, and men’s and women’s speed climbing competitions, the Ouray Ice Fest brings together longtime ice climbing veterans and gumbies alike to celebrate the joys of smashing ice. While many attendees are busy with their own climbing adventures from dawn until dusk, the competitions are the main spectator events of the weekend and the trophies—curved ice tools molded together, protecting ice balls at their center—are highly sought after by elite athletes.

The mixed comp route was set by Ouray local, Andres Marin, and Vince Anderson, of Grand Junction. Featuring a vertical ice start, a lengthy middle section of rock, and above that an artificial wall with tiny artificial holds, this beast was not for the faint of heart. To top it all off, athletes had to make their way across two big monkey bars, a suspended cube-shaped volume on steel cables, and a whole lot of wide open air.

Sam Elias, a 36-year-old climber from Detroit climbs 5.14, WI 6 and M12, and can now add a victory in Ouray to his impressive resume. Elias hammed it up to the crowd the entire way up the grueling route, never stopping to shake out, but often turning around to cup his hand to his ear, prodding the awe-struck audience for louder applause. Elias snagged first place with a time of 9 minutes 19 seconds.

Will Gadd is a perennial favorite (last year he finished fifth), and the number of spectators swelled towards the end of the competition as everyone waited for him to climb. He moved with dialed, deliberate movement and solidly placed his picks with seeming ease on minute holds. Gadd finished in 9 minutes 34 seconds, just shy of Elias’ time. He took second. Gadd has many major accomplishments under his belt, including the first ascent of Niagara Falls, and the second ascent of Christmas Tree—a 500-foot-tall WI 6 in XianXia Canyon in the Taihang Mountains, Henan Province, China. (Gadd’s ascent of Christmas Tree graces the March 2019 cover of Rock and Ice). Recently, Gadd became an environmental ambassador for the United Nations.

Dennis Van Hoek of the Netherlands rounded out the top three in the men’s comp  with a time of 10 minutes 44 seconds.

While most athletes were covered head-to-toe, the Dutch climber Marianne van der Steen caught the crowd’s attention by climbing in nothing more than her gear, bright-orange leggings and a sports bra—and winning first place among the women! Van der Steen made it to within just two holds of the finish in 10 minutes and 52 seconds, just before she timed out (competitors had 11 minutes to climb the route), but kept on climbing anyway and finished the route in style. It’s no surprise that van der Steen was able to conquer the gnarly course—she dry-tools D13+ when she’s not competing. Also cool: van der Steen shares a tiny home with Dennis Van Hoek—the men’s third-place finisher: talk about a powerful climbing couple.

The Hari Berger Speed Competition was held Sunday, and competitors raced up topropes in head-to-head match-ups. After each race, the athletes switched lines and raced again, to ensure fairness among route grades.

Liam Foster—mentee of the renowned Marcus Garcia—took first place for the men, followed by Keenan Griscom and Dennis Van Hoek for men.

Check out this video of Marianna Van Der Steen on the mixed comp route! (Video by Outside Adventure Media)

The Ouray Ice Park remains open and free to users of all skill levels until March or until the ice thaws—whichever comes first. Funding for the park  comes from donations. Contributions are warmly welcomed here. For more information on the park, or to plan your ice climbing adventure, check out the website.

Stay tuned for the a World Cup Ice Climbing Comp hosted by the American Alpine Club, in Denver on February 23-24!

2018 Ouray Ice Festival is Biggest Ever