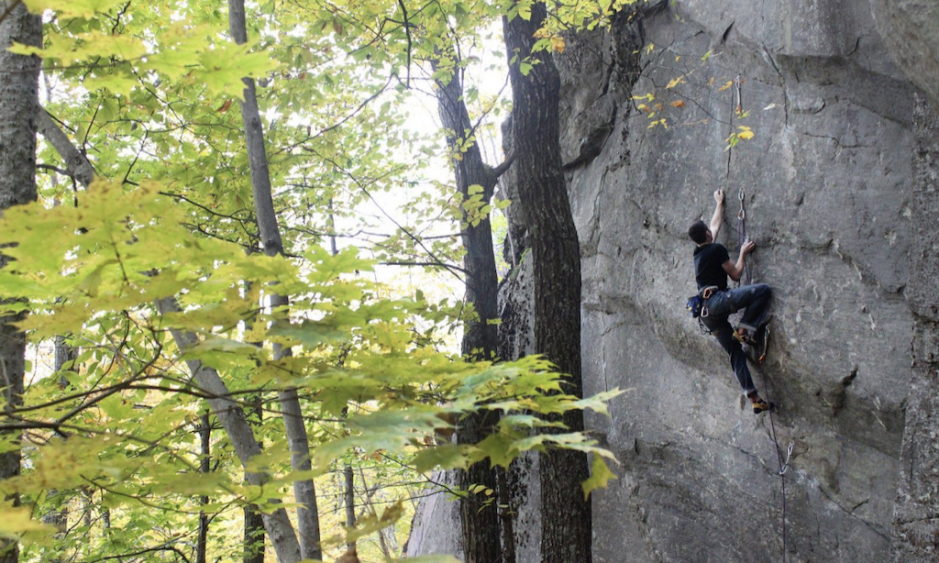 Rumney Climbers’ Association (RCA) and Access Fund are pleased to announce the successful transfer of Rumney’s Northwest Crags in central New Hampshire to White Mountain National Forest for long-term management and climbing access. Also known as the Final Frontier, this land transfer marks the final step in a multiyear campaign to purchase and permanently protect the final set of privately owned cliffs at Rumney Rocks.

The climbing community raised more than $100,000 toward the conservation project, and in 2017 RCA purchased the 85-acre parcel, using a loan from Access Fund’s Climbing Conservation Loan Program (CCLP) to cover the gap and jump-start stewardship improvements. Over the following three years, RCA constructed a new parking lot and trail system.

“We’re proud to have partnered with Access Fund to protect the last remaining privately owned climbing at Rumney Rocks for future generations,” says RCA’s Co-president Peter Jackson. “This project has tested the resolve of the community, as it could have fallen apart dozens of times. We persevered, though, and today we’re happy to say that the Northwest Crags are a part of the White Mountain National Forest. We owe a debt of gratitude to all of our donors–especially the Boston and New Hampshire chapters of the Appalachian Mountain Club and the American Alpine Club.”

[Also Read The Beast of the East]

This is the second successful land acquisition project that Access Fund and RCA have collaborated on at Rumney. The first was in 1994, when Access Fund purchased 36 acres containing the Meadows, Parking Lot Wall, 5.8 Crag, and Monsters, after a private landowner had closed the land to climbing. Following the acquisition, Access Fund worked with RCA to construct a parking lot and trails, before transferring the land to White Mountain National Forest for long-term protection and climbing access.

This new transfer of Northwest Crags to White Mountain National Forest is also a success story for the Land and Water Conservation Fund (LWCF), the country’s primary funding source to conserve irreplaceable lands and improve outdoor recreation opportunities. The U.S. Forest Service was able to tap into LWCF funds to acquire the property from RCA for long-term protection. This allowed RCA to repay its $120,000 CCLP loan, enabling Access Fund to reinvest those dollars to save other threatened climbing areas.

“This acquisition turned into a wonderful collaborative success story,” says White Mountain National Forest’s Lands and Realty Program Manager Craig Young. “RCA had the inspiration, along with the expertise and undying technical and financial support from Access Fund, and the amazing support from the local community. In the words of legendary American forester Gifford Pinchot, the property is now conserved for ‘the greatest good of the greatest number in the long run.’”

Unlike most U.S. Forest Service land, climbing at Rumney Rocks is protected with a detailed Climbing Management Plan, which Access Fund, RCA, and White Mountain National Forest partnered to develop. This climbing management plan is one of only two such plans protecting climbing on U.S. Forest Service land (the other is for Pike National Forest in Colorado), and it outlines sustainable climbing policies and solidifies RCA and Access Fund as partners for long-term, climbing-friendly conservation.

“Acquisition of high-quality climbing resources for conservation and public access has been at the core of Access Fund’s mission since the organization was founded in 1991,” says Access Fund’s Northeast Regional Director Mike Morin. “We’re excited to continue working with RCA as they shift their focus to long-term stewardship of this popular climbing destination.”

RCA can now turn its full attention toward sustainability of Rumney Rocks, including trail stewardship and ongoing bolt-replacement efforts. Access Fund and RCA have embarked on the Restore Rumney stewardship campaign and ask the climbing community for its support. More information about that campaign can be found here.

ALSO CHECK OUT ROCK AND ICE’S MY EPIC PODCASTS!