Meet Andrew Palmer: America’s newest 5.15 climber. A Rumney local, Palmer made the fourth ascent of the New Hampshire sport crag’s hardest route, Jaws II (5.15a), last weekend. He joins only a handful of American climbers to have ticked the grade. 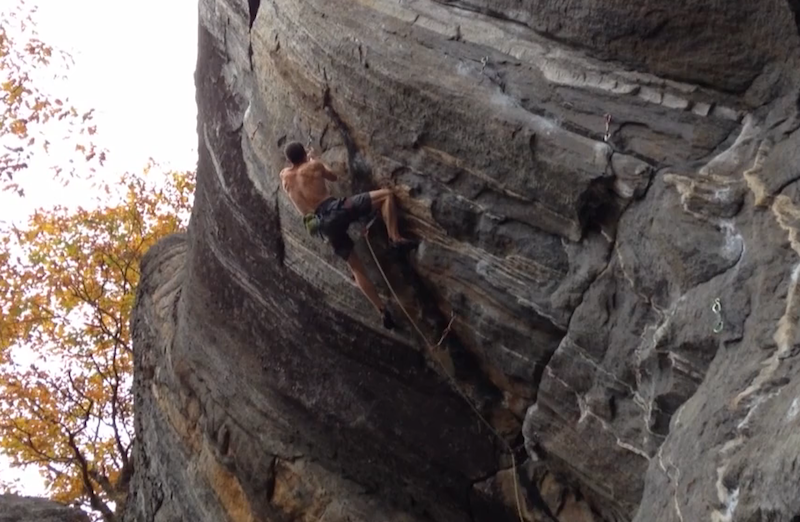 Palmer works the moves on Jaws II. Screenshot from video below.

Andrew Palmer entered a distinguished group of climbers last weekend when he made an ascent of Jaws II (5.15a) at Rumney, New Hampshire, according to 8a.nu. Palmer joins Vasya Vorotnikov, Daniel Woods and Mike Foley as the only people to have climbed Rumney’s hardest route.

According to Mountain Project, the route features two distinct and low-percentage cruxes: first, a V12/V13 boulder problem to a decent rest followed by a large V10 deadpoint. Some easier 5.12 climbing leads to the chains.

The route was originally bolted and sent by Dave Graham in 1998 at 5.14b, at the time simply called Jaws, but after some of the holds broke, Vasya Vorotnikov of Delaware made the first ascent of Jaws II (5.15a). It is one of only three known 5.15’s in America, the other two being Tommy Caldwell’s unrepeated Flex Luthor (5.15a) at the Fortress of Solitude, Colorado and Chris Sharma’s undone masterpiece, Jumbo Love (5.15b) at Clark Mountain, California.

Sharma, however, could bring another 5.15 to America if he sends his new Clark Mountain project, the Jumbo Love direct start, a possible 5.15+ project Sharma told Rock and Ice he thinks should be called Jumbo Pumping Love (see Rock and Ice article here). Still, the project could be long in the making as Sharma is currently in Yosemite on Tommy Caldwell’s Dawn Wall Project.

For now, there are only three 5.15’s, and Palmer is only one of a few Americans to have sent the grade. He joins the distinguished and elite ranks of Tommy Caldwell, Dave Graham, Chris Sharma, Daniel Woods, Vasya Vorotnikov and Mike Foley, among others.

Click here for a video of Palmer working the route just a day before the send.