The 56-year-old climber recently sent several hard routes up to 5.13c/d in Rodellar, Spain (including flashing a 5.13b). Back home, she coaches world-class athletes, including her Olympic-bound daughter, Brooke. 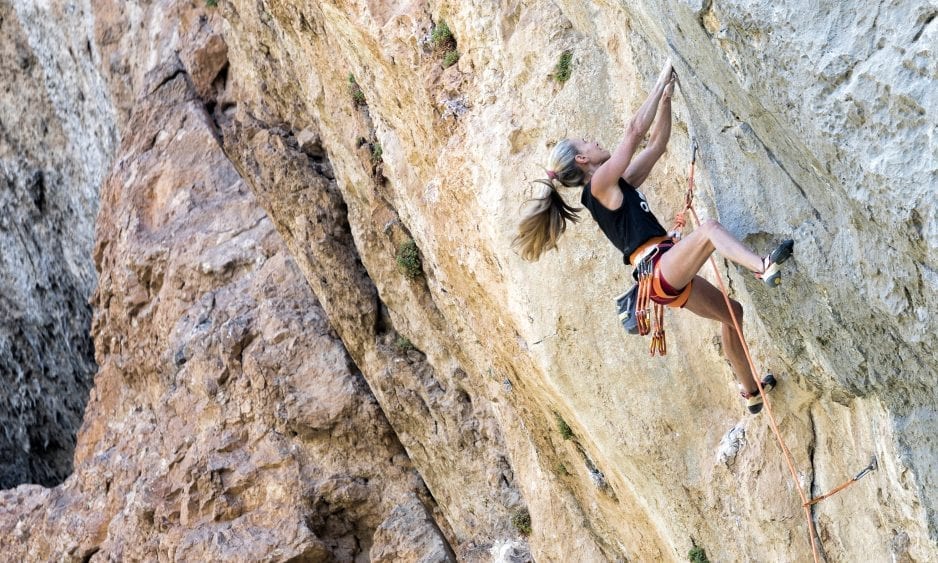 One of the coaches at ABC Kids Climbing in Boulder, CO was reading an issue of Rock and Ice from 20 years ago when she came across an interview with her boss, Robyn Erbesfield-Raboutou.

In the interview, Erbesfield-Raboutou, a world-class competition climber, was asked what she saw herself doing when she got older. Her answer? As she remembers, it was, “I don’t think it’s going to be that much different than the way it is now. I’ll still be climbing.”

And Erbesfield-Raboutou—founder, owner and director of ABC Kids Climbing—is still climbing, and no less passionate about it than she was at the beginning.

In 1989, at the age of 27, she attended the first Climbing World Cup. She came in first place. She went on to land first place in the World Cup four years in a row, from 1992 to 1995.While her role in international competitions has shifted from competitor to coach—through ABC, she has coached star athletes including Margo Hayes and her own Olympics-bound daughter, Brooke Raboutou—she has never stopped crushing.

This summer, she and her husband Didier Raboutou—another former competitive climber, who in recent years has focused more on cycling—took a two-week trip to Rodellar, Spain. With Brooke in Japan and their son Shawn in South Africa, the couple got to take some time for themselves and just enjoy the climbing. Erbesfield-Raboutou set a goal for herself to balance her sends between onsights, flashes and redpoints.

High temperatures in Rodellar meant that Robyn and Didier spent their mornings relaxing and waiting for the sun to get off the cliffs, before climbing “pretty much until dark every night.” On their first day out, Erbesfield-Raboutou tried La Banda (5.13c/d), which she found particularly challenging and particularly intriguing, and it became her highlight redpoint route of the trip. On the day she finally sent it, she also flashed a 5.13b. In all, she sent several routes in the 5.13 range. “Wherever I was, I was happy, and whatever I got on, I was trying hard,” she said.

Many of the kids that Erbesfield-Raboutou has coached have gone on to make climbing history; most recently, her daughter Brooke made headlines when she became the first American rock climber to qualify for the 2020 Tokyo Olympics, following in her mother’s footsteps as a competition trailblazer.

Robyn was at home in Boulder when she heard the news: she had stayed up all night to watch live streams of Brooke competing in the IFSC Climbing World Championships in Hachioji, Japan. When it became clear that Brooke had finished in one of the top spots and would be among the first 16 athletes to qualify for the 2020 Olympics—the first Olympic Games ever to include climbing—Erbesfield-Raboutou immediately received numerous congratulatory messages from friends and coaches, but she was cautious. She didn’t want to jump the gun by celebrating before being absolutely certain that the results were final.

“She FaceTimed me,” Erbesfield-Raboutou recalled, “and she goes, ‘Mom? I qualified for the Olympics.’ I’m like, ‘Are you sure? Is it final? Are you absolutely sure?’ And she’s like, ‘Mom. It’s sure.’”

Erbesfield-Raboutou was breathless as she said, “I still can’t believe it. Honestly. I mean, I knew she had it in her—everyone who’s there believes that they can do it—but to see it come together, it just blew me away.” Erbesfield-Raboutou had planned to be in Japan with her daughter, but she had been called back to the States early by work.

“She had the US team and the US coaches, but she was one of the only competitors without a parent, without a family member there,” said Erbesfield-Raboutou. “I have more respect for that kid than you could ever imagine.” At school, she said, “No job is too big. When she needs to deliver, she’s capable. She really proved that this past week.”

Of Brooke’s exciting news and what’s coming next, Erbesfield-Raboutou said, “You know, we don’t do these things alone. I guess that’s what’s really important. My coaches played a huge role in Brooke winning this ticket to the Olympics—not just her and not just myself, but the family, her brother, her dad, all of the other coaches at ABC.”

As for her own plans: around Thanksgiving, she’s hoping to get out to Hueco Tanks. “I’ve already started thinking about training for small holds,” she said, laughing.

“My relationship to climbing is that I’m in love with climbing,” she said. “When I get outside and I get the opportunity to try something at my limit, I try just as hard today as I did 20 years ago, as I did 30 years ago.”