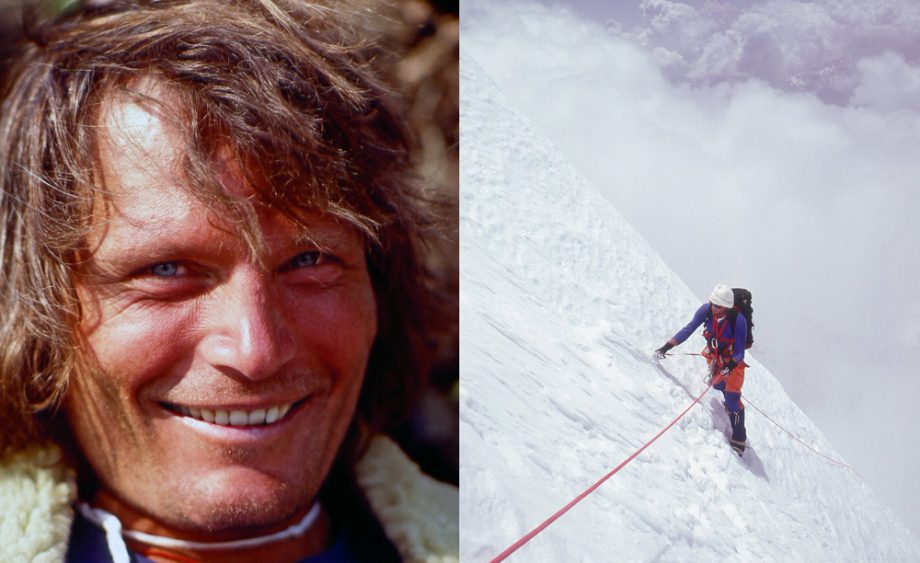 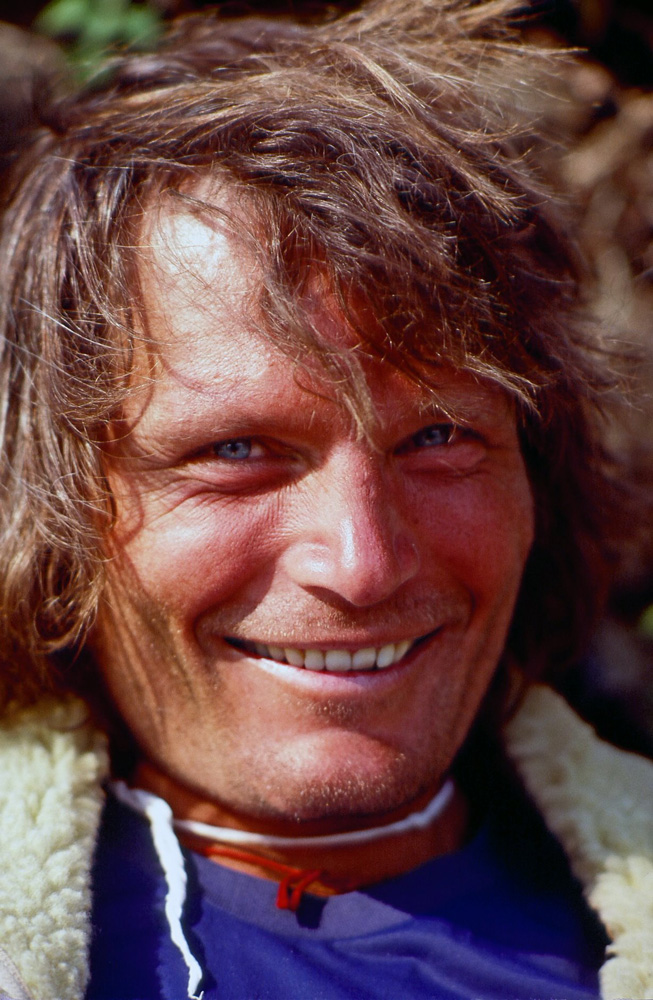 For a moment, albeit brief, I thought Kim Schmitz would settle down and quit fussing in his hammock. After all, portaledges were known to fold and collapse on you, and no one knew that risk better than Kim. But no, he was like a dog trying to scratch and mold a bump out of his bed—on a mission to find something. I glanced over at Ron Kauk in his hammock hanging near me, and he eyed me through a small hole in his sleeping bag. We both knew there was no use saying anything. Not to Kim. Then an errant wind shot up Uli Biaho’s vertical granite wall, caught Kim’s sleeping bag, and plucked it off his hammock webbing. It floated down the wall like a quilted bubble. He cursed and then watched silently, as we all did, as the bag drifted up and down along the wall and, just before disappearing around a corner, snagged a small rock horn 100 feet below our bivouac. The climb hung in the balance with that bag. Kim quickly set up a rappel and rescued his sleeping bag—and the climb, but not without a healthy ribbing from us.

Characters drift in and out of all of our lives, but none were quite like Kim. In 1971 I was in the Valley looking for a partner to climb the North American Wall and knew Kim from several trips to the Valley over the past three years. While we were having a beer in the bar, I asked him if he wanted to climb the NA. “Yeah, but I only want to climb El Cap walls in two bivouacs or less,” he said. I understood his meaning. I was a bit short on big-wall experience. A few days later, I teamed up with Mead Hargis, and the two of us did the NA in two bivouacs. After that, Kim and I became close friends. I had earned his respect.

It wasn’t until Galen Rowell received a coveted permit from the Pakistan government to climb the Great Trango Tower in 1977 that Kim and I were able to team up. In Rawalpindi, we were caught up in the military coup of President Bhutto. As soon as the curfew was lifted, he and I took to the streets and bonded over mango ice cream at the Intercontinental Hotel, then a scuffle with Pakistani men as we tried to get out of a crowded bus to Rawalpindi. Three weeks later, five of us, including Kim, stood on top of the Tower. I came away with from this trip with a great respect for Kim’s athletic ability, competence in the mountains, and great smile that would light up those piercing blue eyes. 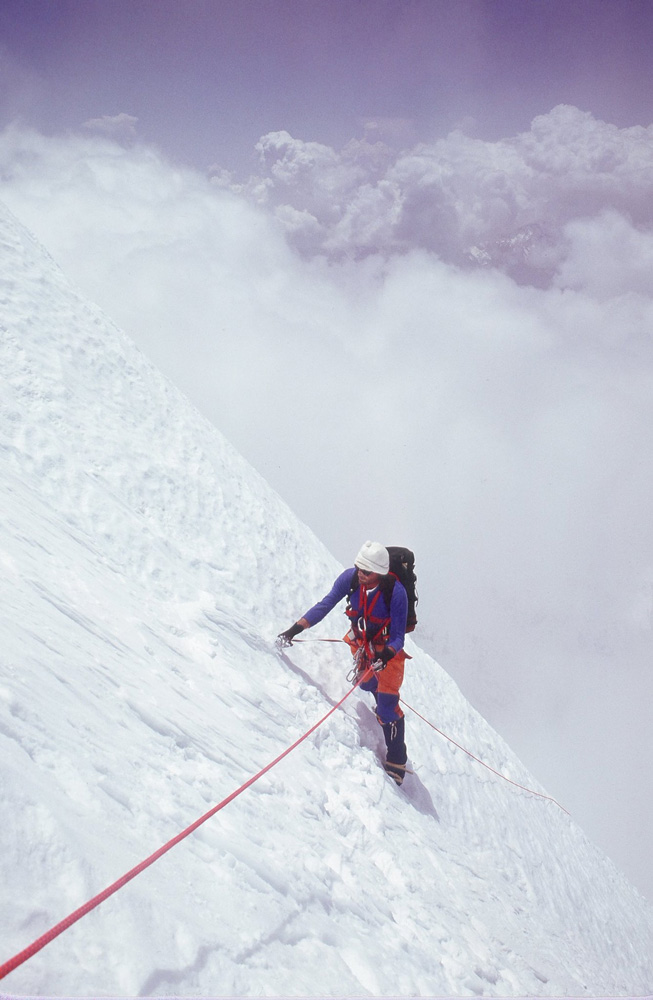 Kim was a quiet man, able to go hours without saying a word, but then suddenly pop out with a short sentence of philosophical observation, a Schmitzification, so to speak. One of those happened on Uli Biaho. I was leading a hard ice pitch just below the summit and under a monster double-cornice when my rope cut loose a basketball-sized chuck of water ice. Like an osprey diving for a fish, it honed in on Ron Kauk, who was belaying 75 feet below me. The ice block hit him directly on the shoulder. Ron was hurt bad, but nothing was broken. He yelled up he wasn’t going any further.

We were in a funnel below the cornice and a big ice wall, and the sun had heated it up all day. We needed to get out of there. I saw Kim jumar to Ron’s belay, where they exchanged some heated words. I continued to climb, and soon Ron followed. Later I asked Kim what he had said to Ron to get him to keep climbing. “Oh, I just told him he’s just a big baby, and that he may be a big man in the Valley, but he’s nobody here,” he said. Kim and Ron were like a married couple. Ron ignored the pain in his shoulder, shrugged off Kim’s “Schmitzification” and along with Bill Forrest and me made the final push to the summit as the sun lowered into the Karakorum.

Kim went through more trials and tribulations in his 70 years than any group of us. He had more steel implanted in his body from car and climbing accidents than the Terminator, and had suffered through more illness and parasites than a Petri dish. His travels, like mine, were before water purifiers, bottled water and newer meds, and led him to a host of problems. In time he overcame severe addiction to alcohol and pain medications, and in recent years he fought cancer and subsequently had an organ or two removed. Those of us who knew him all marveled at his resilience, his lack of self-pity, his dignity under the circumstances, and his joy of life despite the pain he lived with constantly. We are so fortunate that he has left us a template to live the rest of our lives with.

I loved this man, as we all did, and I will miss that smile and those eyes. Kim, enjoy your peace. You earned it.

Kim Schmitz passed away after a single car accident yesterday evening, Monday, September 19, 2016. Here is a small list of only a few of his many climbing accomplishments: 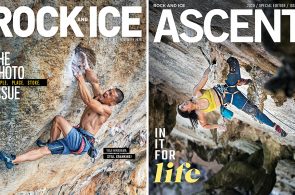