Recap of the Piolets d’Or 2018 Ceremony in Ladek Zdroj, Poland

It was the first time the event took place outside of France, but was, by most any measure, a great success. 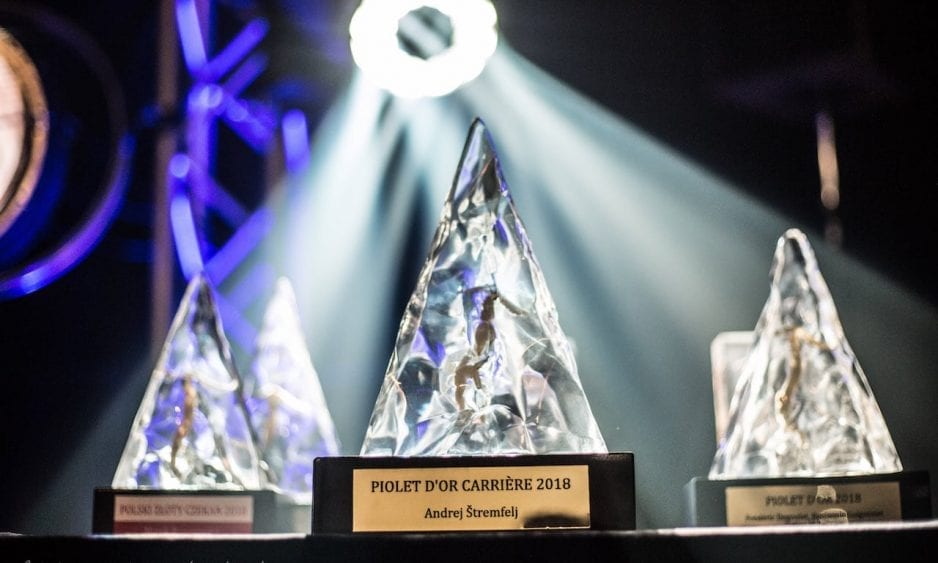 “This year’s Piolets d’Or ceremony celebrated alpinism in a new and refreshing way, with a healthy mix of pageantry, humour, respect and honour.” So said world-renowned Canadian author of mountain-related books, Bernadette McDonald, after her visit to the Ladek Mountain Festival, which took place from September 20-23 in Ladek Zdroj, a small spa town in southern Poland.

It was the first time that the organizers of the most important award in the world of alpinism decided to move the event far away from France. Recently, the ceremonies have taken place in Chamonix, Courmayeur, La Grave and Grenoble, but choosing Poland for the 2018 Piolets d’Or came as a surprise to the world’s climbing community.

With the honored climbs and climbers already known, Polish organizers decided to surprise the audience by bringing to the stage a collection of living legends and outstanding climbers to present the awards.

First was the female Polish Himalayan mountaineer Kinga Baranowska, who has ascended nine 8,000ers without supplementary oxygen. She asked two female American alpinists, Chantel Astorga  and Anne Gilbert Chase, to join her on stage to receive a Special Mention award for a Notable Female Achievement—the first ascent of the southwest face of Nilkanth in India’s Garhwal Himalaya, climbed together with Jason Thompson.

One of two awarded climbers who couldn’t make it to Ladek was the American Alex Honnold, who was stopped by the New York premiere of his movie Free Solo. Who might be best to receive the Special Mention award on behalf of Honnold for his contribution to climbing during 2017? Another Yosemite legend, and regular climbing partner of Honnold, Tommy Caldwell. It was Kinga Ociepka, the first Polish women to lead 9a (5.14d), who described to the audience Honnold’s outstanding achievements during 2017, and asked Caldwell to step onto the stage. “He wouldn’t drink your vodka, as he doesn’t drink, and he wouldn’t eat your sausage as he’s vegetarian, so it’s better I’m here anyway,” joked Caldwell, accepting the award.

After these special mentions it was time for the main awards. It was Leszek Cichy, outstanding Polish mountaineer (first winter ascent of Everest, and first ascent of Shispare back in 1974), who presented a Piolet d’Or to Kazuya Hiraide and Kenro Nakajima from Japan, first ascentionists of the northeast face of Shispare, a high peak in the Pakistan Karakoram. Cichy remarked that he was “proud that after more than 40 years, Shispare, which is a beautiful mountain that before last year had seen only two ascents, is still interesting for the new generation of climbers.” 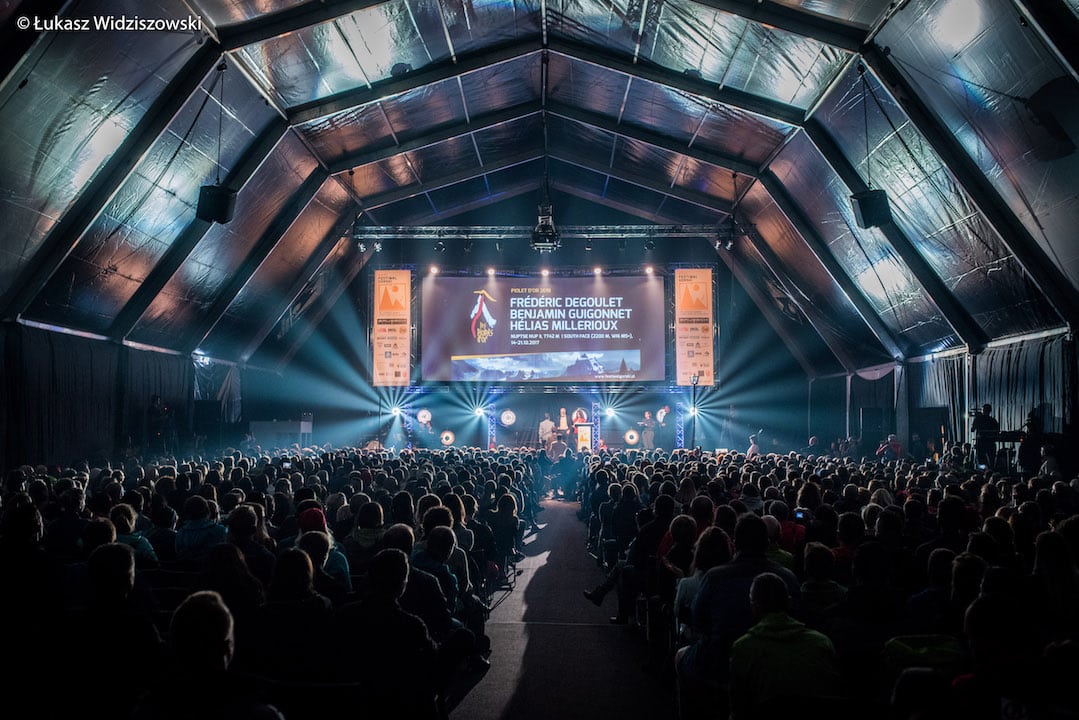 Next was another legend of world mountaineering, Chris Bonington, a summiteer from the British expedition that in 1961 made the first ascent of Nuptse. Bonington introduced the young French trio of Frédéric Degoulet, Benjamin Guigonnet and Hélias Millerioux, saying, “Their new route on the south face of Nuptse Northwest is absolutely brilliant. It involved hard technical climbing, and they just kept going, using their skills and determination. It’s just what the Piolets d’Or are all about.”

The last of the three Piolets d’Or for ascents in 2017 was given for the new direct route on the southwest face of Gasherbrum I, climbed by the Czech team of Zdeněk Hák and Marek Holeček. As it was the only 8,000er in the pack, the most appropriate legendary climber to present the award was Krzysztof Wielicki, author of a number of bold alpine style ascents, and three first winter ascents of 8,000ers. “We all remember that Voytek Kurtyka and Jurek Kukuczka first climbed that face,” said Wielicki, “but these two young Czech climbers arrive 30 years later and make an incredible ascent. It’s normal that young people will improve on our style , so it’s a big honor for me to put a Piolet d’Or into their hands.” Taking the stage with his young daughter (standing in for Zdeněk Hák, who couldn’t be present), the effusive Marek Holeček noted that this was the first time a Piolet d’Or had been presented to a Czech climber and said, “This award is not only for Zdeněk and me, but also for the history of mountaineering in the Czech Republic.”

Arguably the most important award of the event was the Piolet d’Or Career or Lifetime Achievement Award, which this year was bestowed on the accomplished Slovenian alpinist, Andrej Štremfelj. Chris Bonington, who over his very lengthy career has received numerous prestigious awards, including a Knighthood for services to mountaineering, has said on many occasions that the Piolet d’Or Career Award meant more to him than any other, because it was an award conferred by his peers.  In the past this award has been presented on stage by one of the “old guard.” This year it was the turn of the younger generation to award an old master. Fellow Slovenian Luka Lindic, accompanied by instrument-playing Belgians, Nico Favresse and Sean Villanueva, took the stage, where Luka said, “I’m a member of the young generation of Slovenian climbers, but if I try to put together words to describe what Andrej did, I’m just speechless. In the name of the whole Slovenian climbing community: Andrej, Hvala!”

Štremfelj responded humbly by acknowledging that one of the greatest factors behind his long list of ascents was his wife, herself a celebrated Slovenian mountaineer. With this, Marija was called on stage to join him. Štremfelj became the 10th recipient of the Career Award, joining Walter Bonatti, Reinhold Messner, Doug Scott, Robert Paragot, Kurt Diemberger,  John Roskelley, Chris Bonington, Voytek Kurtyka and Jeff Lowe.

This year the Ladek Mountain Festival and Gory magazine inaugurated their own Polish Piolet d’Or, separate from the main Piolets d’Or, but accepted by the organizers of the latter on condition it fully met the spirit and criteria of the latter. Awarded were two routes completed in 2017 by the Polish big-wall climber Marek Raganowicz: Secret of Silence on the Ship’s Prow, Baffin Island, climbed solo and with no drilling, and Suser Gjennom Harryland, on Norway’s Trollveggen, the first winter solo ascent of any route on the Troll Wall. The award was presented by president of the Piolets d’Or Organizing Committee, Christian Trommsdorff.

Throughout the entire ceremony, which took place during the evening of Saturday, September 22, and included extra entertainment in the form of a live band and impressive aerial gymnast, the former World Cup Speed Climbing competition champion, Lukasz Swirk, the response from the largely Polish audience at the venue, more than 2,000 in number, was, characteristically, hugely receptive and enthusiastic. The spirit of the Piolets d’Or had been maintained.

The Ladek Mountain Festival, with its international movie competition, many lectures, and interesting panel discussions, proved to be a great event to host the Piolets d’Or. Luka Lindic again: “It was an honor for me to be part of an event where Andrej Štremfelj became the first Slovenian to gain a Lifetime Achievement Award at the Piolets d’Or ceremony. I think it’s a good idea the event moved to a different place to get some freshness. I must honestly say that with the strong tradition of festivals in Poland, and the good atmosphere I experienced in Ladek, I could hardly imagine a better place. Hats off to the organizers.”