Reaching New Heights in Iraq: Longest Climb in the Country Established in Sulaymaniyah

Locals in northern Iraq have bolted and FA’d a 75-meter multipitch—the longest technical rock climb yet in the country! 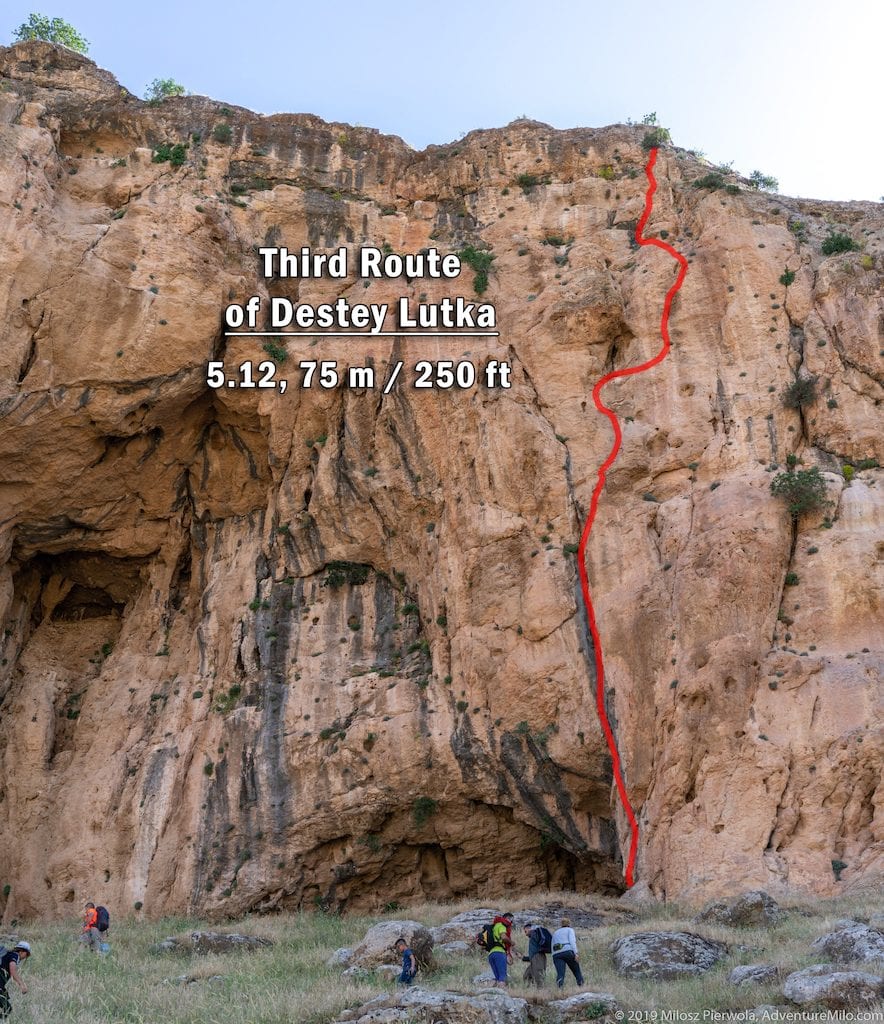 On July 19, 2019, Iraqi climbers celebrated the opening of the tallest route in their country, The Third Route of Destey Lutka, a three-pitch 5.12 that is over 75 meters (about 250 feet) in length. Iraqis Siamand Ahmad and Hawar Raza made the first ascent.

Climbing is new in Iraq and only in recent years have serious climbers started popping up in the country. Due to historical instability, recreational mountain activities have been effectively non-existent. However, two decades of relative peace in the autonomous region of Kurdistan in the north, combined with the power of social media, have resulted in an explosion of interest. Now, the country is catching up at an incredible pace, nurturing a new climbing community and culture. Soon, the country will even have its first climbing school.

The Third Route of Destey Lutka is named after the group that put it up, Peaks Mountaineering Crew, and is situated just south of the city of Sulaymaniyah. The first pitch has 13 bolts, and each of the next two have 11. The route is inside the Hazar Merd Cave, one of two paleolithic locations with evidence of Neanderthal occupation. The area features a series of caves facing north, thereby protecting climbers from the harsh Iraqi summer sun—temperatures regularly exceed 40 degrees Celsius (104 degrees Fahrenheit)—and from the extreme winds the region is known for. And, during the rainy season, the caves stay dry.

Hazar Merd Cave is the closest rock climbing to Sulaymaniyah, accessible via a short drive via a winding dirt road that can be navigated with a 4×4 or easily hiked. Though the area is on private land, the owners have welcomed climbers both because they promote environmentally friendly behavior and because visitors have brought business to the village just below the cliffs.

As a testament to how popular climbing is becoming, Peaks Mountaineering Crew held a ceremony for the opening of the route which was televised by KurdSat News. Over 35 climbing groups from around the country were invited, with over 150 people in attendance. The report featured the two climbers who bolted and FA’d the route—Siamand Ahmad and Hawar Raza. Both were among the first Iraqis to start climbing and have become leaders in the growing community.

Ahmad and Raza’s efforts are even more impressive considering the lack of proper climbing gear available in the country. Hawar made the first ascent of The Third Route of Destey Lutka with blown-out indoor climbing shoes.

Because no climbing equipment manufacturers distribute in Iraq, the only way to obtain gear is to go picking through wares at flea markets. These missions often turn up random bits of equipment—usually inadequate, broken, or knock off. No books on climbing are sold in Iraq, so climbers must rely on foreign-language internet resources to learn about climbing techniques and skills. Since there has never been a need before, there is currently no mountain rescue team and even simple accidents can rapidly become life threatening. In addition, although there exist hiking groups in the country, there is no standardized program that offers comprehensive climbing and outdoor education.

But Raza, Ahmad and the rest of the climbers in Iraqi Kurdistan have forged ahead despite these challenges. Without being able to purchase gear, they hand-make their own equipment in their garages, including complex protection and tools. Another  member of Peaks Mountaineering Crew has spent the last two years chasing university professors to help translate a leading mountaineering book from Iran; in a few months it will finally be published.

And with this makeshift gear and the newly translated book, the goal is to build the foundation for Iraq’s first climbing school.

Beyond establishing new climbs such as The Third Route of Destey Lutka, the group is developing other mountain resources for the population of Iraq.  Members systematically explore and establishes new hiking routes, collecting them in a trail guide. They have also installed signs on the summits of popular mountains, listing the name and elevation, a practice that has now spread across the region. Most critical of all, the group has already volunteered their contact information to the police for mountain emergencies and have participated in a number of successful rescues.

All of this—the new routes in Hazar Merd Cave, the ability to disseminate informaton about climbing more readily with the publication of resources in the local language— is helping to lay the groundwork for the future of climbing in Iraq.

At present, a local community center in Sulaymaniyah is the heart of the climbing community. Events at the site—such as a screening of the Dawn Wall in collaboration with Red Bull—benefit the eventual establishment of the climbing school. At present the community center has classes, ranging from ballet to martial arts, music to aerobics. It even has a dental clinic. And, soon, if all goes well, it will host a nine-meter climbing wall as well.

What’s next? Ahmad, Raza and another climber, Kamaran Rasul, have plenty of big plans. During a video chat, they laughed as they described their ultimate dreams of climbing El Capitan in Yosemite. And then mountains in the Himalayas. And more.

But presently they have their sights set on a 200 meter wall on their local mountain, Pire Migron. Before winter comes, they will rappel down it to examine the rock.

Then they will patiently craft and collect the necessary gear to make their newest dream a reality.

The First Road Trip, Ever