[Correction. Updated 9/30/19 8:21 pm MST] — R&I got suckered in by an MP troll—who continued trolling when he was called on the phone to verify the story. His tall tale was entirely made up. 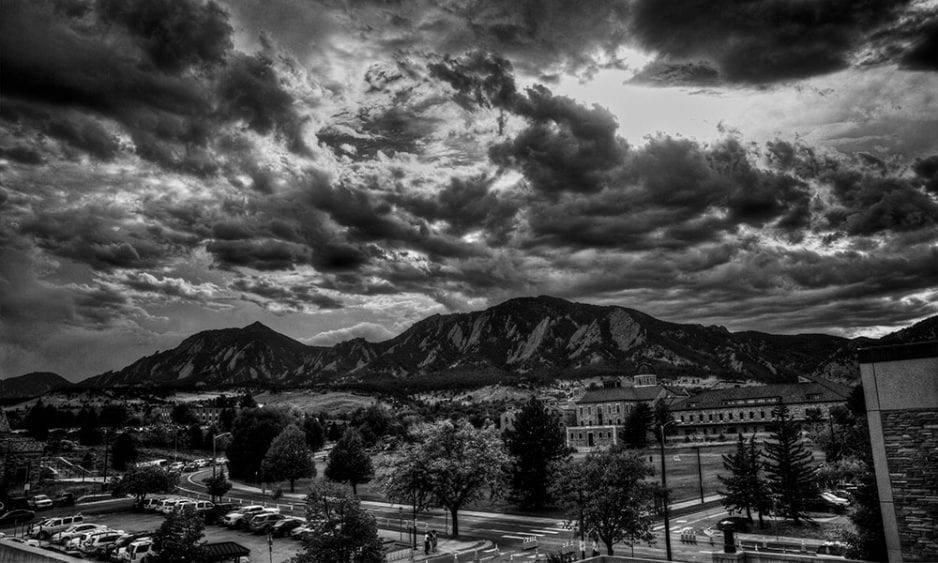 The Flatirons, shot from the University of Colorado at Boulder’s parking garage. Photo: Zach Dischner.

[Correction. Updated 9/30/19 8:21 pm MST] It turns out that Alex Lee, the author of the original Mountain Project post described in the article below, was in fact a troll: he made up the entire story.

Lee (whether that is an alias or his real name is unknown) stood by his claims and account in a phone call with a trusted third-party source, a big factor in R&I’s decision to report the falsehoods.

Lee updated his post this evening. He retitled the thread “Oops,” deleted his original post, and replaced it with the following: “Wow that blew up. Just wanted to share an update: Still haven’t located my gear because none of this happened. Sorry Rock and Ice.”

Our original reporting appears below for reference.

The situation we’re so indignant about is something that happened on Friday on the First Flatiron, that majestic slab perched above Boulder, Colorado. While some Boulder locals solo the 1,000-plus-foot Direct East Face (5.6) on the regular, many still wisely choose to rope up for it (and more probably should).

So here it is. In a post on Mountain Project, Alex Lee explains that he and his friend, both relatively new climbers, set out to climb the DEF. What began as a great adventure day, turned sinister and dangerous. See Alex’s post below for the full story:

“Hey, a friend suggested I post this here. My rack was stolen from the first flatiron yesterday. If anyone has any info please let me know. I had doubles of Black Diamond .3-4 camalot C4 cams, a set of #1-13 stoppers, and offset micro stoppers #1-6. It was all pretty new. The gear was taken from the 6th pitch of the Direct East face of the first flatiron. My partner and I were climbing the route. We reached the ledge before pitch 6 and came across a guy who seemed pretty freaked out. He said he was free soloing but that he was in over his head. We offered to let him join our group. He had a harness he was going to use for the rappels so it was easy. We were honestly relieved to have him because we’re both newer trad climbers and he offered to lead the pitch since he’d done the route before. I gave him the rack and my end of the rope. He did the first few moves, but then he pulled the rope and it fell off his harness. I freaked because I thought it came off by accident. Then he said “thanks for booty” and then easily soloed the rest of the pitch and left. My girlfriend was hiking up to meet us at the bottom of the rappels, and she thinks she saw him running down the trail with my rack. My partner and I didn’t know what to do and it was about to get dark, but luckily another party came up and let us join them for the rest of the route (Jon and Lisa you guys rock!). The guy was white, late 20s/early 30s, shaggy brown hair, he had a beard, and he was wearing a red long sleeve shirt and gray nylon pants. I’m pretty upset about this. I just learned to place gear last month and my parents gave me the rack for my birthday and I’m pretty shocked that someone would do this.”

For those who suspect Alex of being a troll, seems that’s not the case. Another MPer, John RB, responded later in the thread, “Another person from the local community called Alex and got a lot more details.  He is apparently quite sincere and (understandably) quite upset about all of this.  I really doubt the d-bag who stole his gear will ever get caught, but I sure hope I’m wrong.”

So let’s recap: Trad neophyte Alex and his friend are climbing First Flatiron. At pitch 6, guy soloing with a harness asks to join them because he is ostensibly scared. Alex and friend let him take the lead, since he is more experienced and they are tired from already being on the face for hours. The guy climbs a few moves, unties, turns to Alex and friend and says “Thanks for the booty,” and solos off with their rack, leaving them stranded.

What in the holy hell!? Stealing gear mid-climb, leaving climbers stranded in the middle of a face after pretending to help them? It seems unbelievable, but everything points to it being true.

Alex—we hope you get your rack back.

To everyone else out there—stay vigilant!

Bob Dergay, 48, Who Died Free Soloing In Eldorado Canyon, Was Larger Than Life—In Every Way

Well that’s a new low for our community, and a little traumatic. Shouldn’t be too hard to catch him, stay on top of it and let us know when you spot him. And don’t worry you can still get plenty of climbing done by relying on others for a bit, and now you have an excuse to buy ultralights and/or Totems. Maybe build your strength/confidence up with some sport climbing, save up for a new rack, and then safely return to trad.