Pirmin Bertle, a 30-year-old German climber, has cranked the first ascent of Meiose (~5.15b) at La Tribune, Charmey, Switzerland. 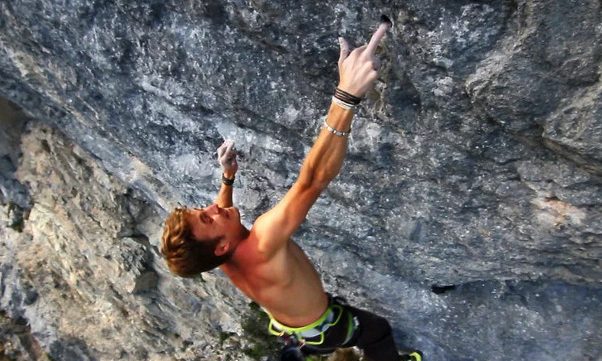 Pirmin Bertle, a 30-year-old German climber, has cranked the first ascent of Meiose, which he graded 5.15b, at La Tribune, Charmey, Switzerland.

“I don’t shout the luck out of me until I am on it: the last hold. It’s done! I’m not relieved…. I’m just surprised, I’m happy. I really like this life,” Bertle writes in his blog.

Back in March, 2012, Bertle had one of the most productive days in climbing history. He claimed the first ascents of Chromosome X and Chromosome Y, two 5.14d routes at La Tribune, in just over an hour.

Two years later, Adam Ondra tried his hand at Chromosome Y. With beta from Bertle, Ondra managed to flash the route, which he called, “soft,” perhaps owing to the “bouldery route which fit [his] style perfectly.” Discrepancies aside, Ondra confirmed the grade.

Bertle writes that he originally conceived a single, 65-foot beast, not two separate routes. He called the project Meiose, French for meiosis (Bertle’s son was born in March 2012). Eventually, Bertle split the two V13 boulder problems into distinct routes—Chromosome X and Chromosome Y—taking lines of less resistance into and out of the most intense sections of climbing.

In the years after Bertle’s double-first-ascent day, he continued to return to La Tribune to project Meiose, even though it had proved too difficult in 2012. Then, last year, he was diagnosed with bone marrow edema; a condition that prevented him from climbing and most other intense physical activity. “The pain came and went like it wanted,” he writes. “Sometimes I could boulder 7C [V9] without any problems, then 5A [V1] threw me back for months.” Once he was healthy enough to climb again, Bertle had lost more than 20 pounds—a factor to which he partially attributes his success.

After more than 150 tries over four years, he has sent Meiose—grading the route 5.15b. It is his first redpoint of the grade, and he would be the eighth person ever to climb at that level.

Meiose‘s 5.15b assignment has met murmurs of skepticism among the grade-watchers of internet forums—“I can only assume Bertle is trolling the hell out of us,” one commenter writes. Others are gentler, calling for repeaters, not internet speculators, to confirm or deny the grade: “Just because you haven’t heard of him doesn’t mean he hasn’t climbed these grades.”

Bertle’s approach to grading is theoretical, in lieu of more experience on confirmed routes rated 5.15b. “The golden rule of the French scale,” he writes, is, “that an onsight level of the a-grade should implicate a one-day level of the b-grade and a five-day level of the c grade.”

By this logic, if your best onsight is a 5.11a, it should take you one day to redpoint a 5.11c, and five days to complete a 5.12a. This means that any project requiring more than five days of effort demands extrapolation. Following the previous example, would a 5.12c necessitate 25 working days?

Doubt is inevitable. A relatively unknown climber establishing top-tier first ascents at a local crag is something the climbing community is unaccustomed to hearing. When a new 5.15b arises, it’s usually accompanied by a short list of familiar names: Ondra, Sharma, Flatanger, Spain. With Bertle proposing to enter the elite group of climbers who have redpointed 5.15b, just weeks after Stefano Ghisolfi climbed his first 5.15b route in Italy, we may be entering an era when darkhorse climbers are reaching cutting-edge grades.