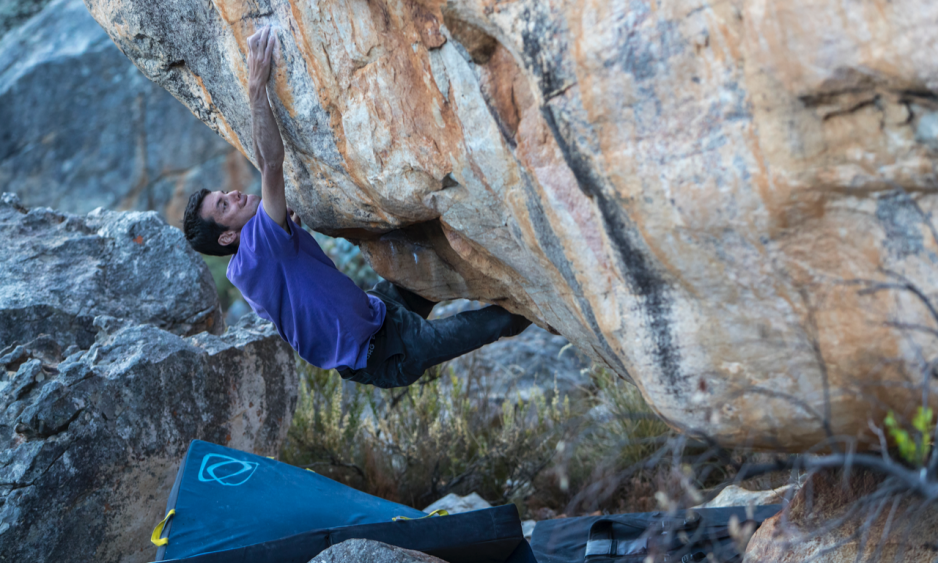 The American climber Paul Robinson has sent a new V15, Pirate’s Code, in the Three Corners area of Cederberg, South Africa. He has been developing the area since 2014. Robinson first discovered the boulder that same year. He told Rock and Ice, “At first I really wondered if it was possible. It wasn’t until 2016 that I was ready to try it.” After a few days of effort in 2016, he surrendered, but came back last year and did all the moves save for one. At that point, “I knew with a bit more strength the climb would be feasible,” Robinson said.

This year he returned again to Pirate’s Code, which runs up a golden and black-streaked arete. On his first day managed to stick the move he had failed on in 2017. A few days later, he made the FA.

“That was such an insane moment,” Robinson said. “It was surreal really. Every move, perfect. Not a single moment was it not right. It was amazing. It really never happens… more like that one in a million go. Sure, a lot of times we send boulders and we screw up a little bit but bring it back together. This time everything just went perfectly.”

He described the line as “tensiony and super crimpy,” with very small holds and no feet. “The line is tough from the moment you pull on until you are on the jugs at the top of the wall.” He added, “Every move is so tensiony that if you screw one of them up, it is just impossible to do the next move.”

Robinson feels relatively confident about proposed the grade of V15 for the new problem. “As we all know grading is a very subjective thing. To me this climb just really felt like a big step up … I started my season strong with a V14 in Australia and then a few weeks later a few V13’s and a V14 in South Africa. There was no doubt to me this thing felt leagues harder. It is hard to say, obviously, how others will perceive the grade on this one. But personally, this climb took me a long time to do and with it being in my style, it seems appropriate to give it the V15 grade.”

Of the name, Pirate’s Code, Robinson said, “The boulder very much looks like a ship, especially the side where this climb is. So the whole zone got names associated with shipping, pirates, etc. Pirates have always interested me, and just how wild and crazy life was for a pirate at sea. I think of this area kind of as an escape from the norm. Everyone is in Rocklands year after year. It is nice to break away from the norm and go out and do my own thing, pirate style!” -Owen Clarke