Climbing the thing was only part of the adventure though… 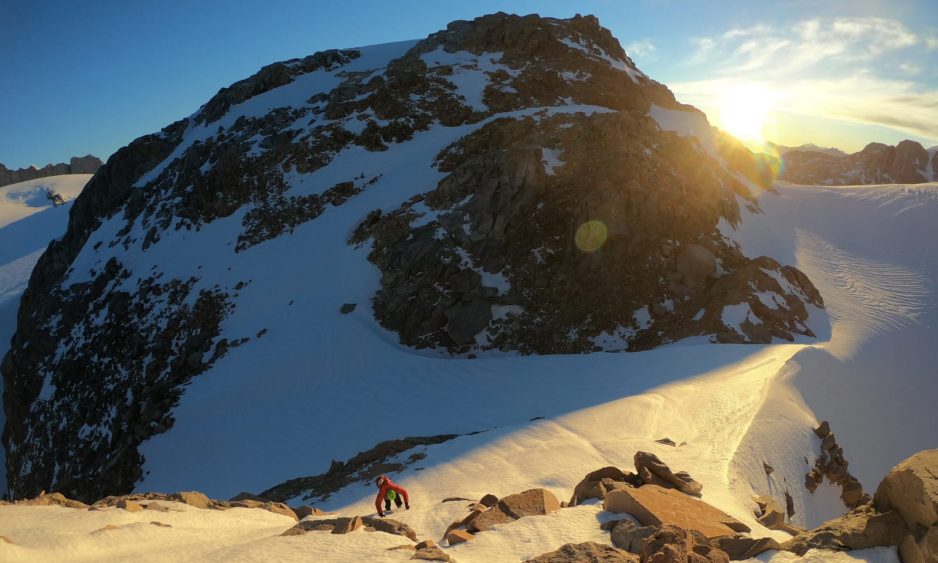 Climbing on their new route on the previously unclimbed peak, which they named Cerro Mangiafuoco. Photo: Courtesy Paolo Marazzi.

Fired up about hopefully snagging the FA of an unnamed mountain in Camp de Hielo, Patagonia, Paolo Marazzi and Luca Schiera arrived in Coyhaique on December 28th. “As always, things didn’t go as planned,” Marazzi wrote in a trip report he sent to Rock and Ice. Their gaucho told them that  he wouldn’t be available until January 2nd. With dashed hopes, Marazzi and Schiera moved to a different village in Puerto Bertrand, where they learned of an optimistic weather window in the coming days.

The mountain they had their eye on was a 2,000-meter-high peak in the southern Patagonian Ice Field. Marazzi and Schiera, experienced alpine guides, were not about to allow continued travel troubles to dictate their climbing schedule, so they decided to take a boat across the lake and just start walking.

Marazzi said, “The first day we walked 10 hours, and in the afternoon of the second we reached the first glacier. The good weather had already arrived. The glacier was full of crevasses that led us opposite to our direction, and we lost a lot of time trying to cross it. In the evening we managed to get through it but was already too late to reach the Hielo Norte Glacier as we had planned.”

Deflated, the team turned in for the night, and eagerly arose early the next morning with expectations to start their climb, only to be stopped a few hours later by heavy winds. They left their gear behind, and tried again later in the afternoon, finally reaching Campo del Hielo Norte at 1600 m. Good weather and beautiful scenery were offset by raging wind that made the environment feel “inhospitable.” The team tried to walk towards the walls, but the wind prevented  them from even picking up their binoculars. They took some pictures, made a plan, and went back down to their bivy from the night before.

In the light of a new day, Marazzi and Schiera walked into the forest once again, where the gaucho had left their supplies. They pitched their tents and waited out stormy weather for five more days.

“We already had around 100 kilometers in our legs, we were dehydrated and with the skin sore from the strong sun rays and wind,” Marazzi said. “Our lips were so swollen that we couldn’t even close the mouth properly, the skin on our face was dead dry and started falling into pieces… removing it become a pastime during the rain days.”

Amongst thinning hopes, a new weather window appeared out of nowhere: 36 hours with no wind gusts was forecasted for January 14th. With light loads, they left basecamp with the east edge of the unnamed mountain in their minds.

“For the night we bivouacked on glacier Nef,” Marazzi said.  “At dawn the wind was still blowing hard and it had started to snow. We hadn’t brought our tents to be lighter on the ascent, and two black garbage bags were the only shelter from the snow.”

After a few hours of restlessness, the men started walking. At the glacier, they dug out a snowcave for a bivy.

The next morning, the weather looked promising, with no wind and good temperatures. They began up the mountain.

Marazzi recalls, “We alternated the lead, the wall was mixed with rock and ice, and in a few hours we completed the first section of the wall. The central section had looked easier from the bottom, but presented instead some difficulties as the line was not so visible anymore amongst some smaller peaks and snow ridges. The steep rock was not easy to climb with the mountaineering boots and our heavy backpacks, but we managed to reach the final section of the wall later in the afternoon. There were two wider wet cracks and a smaller third one partially dry. We put on climbing shoes on the ledge and with a final rush we got to the last pitch. At 2 pm we reached the summit, in the horizon an infinite landscape of mountains, snow and ice.”

They had rappelled back to safety and comfort by midnight, and slept sheltered from the torturous wind. They knew the next morning that they needed to get out, and their only option was rafting down the river. Through heavy rain and wind, they loaded their boats and set off. After capsizing during a battle with the weather, Marazzi and Schiera took a wrong turn and ended up in shallow waters where they were unable to continue on their rafts. They backtracked an hour in the harsh conditions, shivering and soaking in the roaring wind before they were able to get back on their rafts.

“From that moment on fortunately things got better – the sky opened and the more we approached the valley the more the sun started shining – finally we could warm up again. The stream finally became consistent and helped us reaching faster the Bertrand lake. There we took the first boat ride, safe to the other side of the lake.”

They had done it.

Marrazi said, “To our measures the mountain should be around 2000 meters high, we’ve named it Cerro Mangiafuoco to be consistent with the other peaks in the area. The route is called L’appel du vide, 6c M4 400mt from the hill to the summit.”

Art of the First Ascent: The Bold Climbs of Marcus Garcia