Tommy Caldwell, Caroline Gleich and Jeremy Jones spoke at a hearing Thursday on the importance of policy action on climate change. 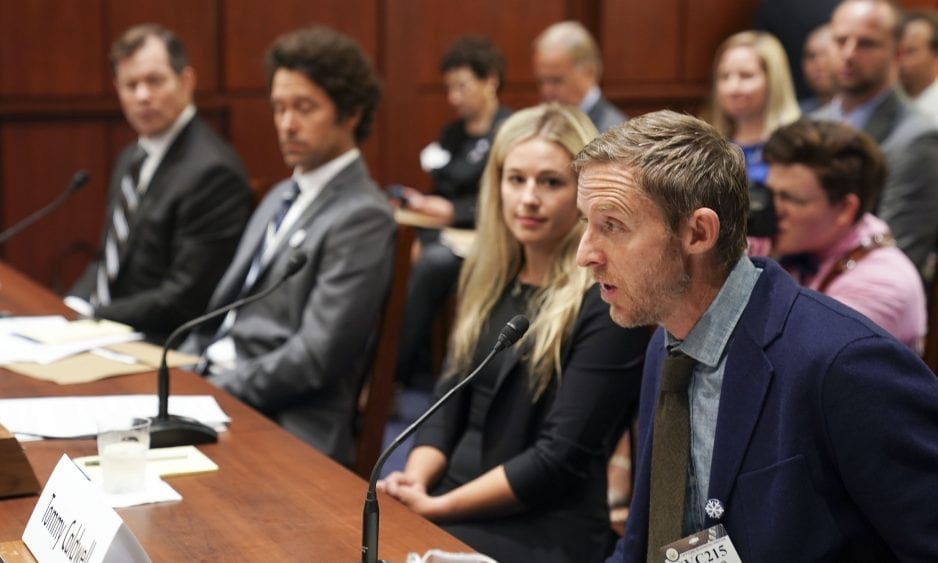 U.S. Senator Brian Schatz of Hawai’i, chair of the Senate Democrats’ Special Committee on the Climate Crisis, addressed the panel before him, which included Tommy Caldwell, professional climber and star of the 2018 documentary The Dawn Wall.

“It seems to me that there’s a resistance among athletes about politics generally,” Senator Schatz said. “I think snowboarders, climbers, and others can be loners, can want to separate themselves from the government and cities, and all the rest of it. So I’m just wondering if there’s any culture clash, or if that’s over. What’s the status of your colleagues, and where they view their obligation to get involved?”

Seated at a table in the Capitol, facing Senator Schatz and dressed for the part in a dark blue suit jacket and a tie, Caldwell leaned into the microphone. He said, “I would say that climbers historically like to see themselves as countercultural rebels, so yes, there’s been a clash, in the past. But the culture is certainly changing.”

He used his experience with social media as an example. “When I used to post pictures of political events, nobody would engage or be excited about it, and now they get more engagement than even pictures of, like, my cute little daughter, for instance.” Onlookers laughed. Caldwell added, “But still not quite as much engagement as, like, sending the gnar and doing something really rad.”

Caroline Gleich, a professional ski mountaineer seated beside Caldwell, said, “I think as outdoor recreation is becoming more mainstream, and more Americans are participating in hiking and skiing and climbing and all these different sports, they also see a need to use government as a tool for problem-solving.”

To Gleich’s right was Jeremy Jones, the snowboarding champion who founded the nonprofit climate-advocacy group Protect Our Winters in 2007. “For me, when I started Protect Our Winters, I had no idea that the front lines would be here in Washington, D.C,” Jones said in the hearing. “But it just became clear that real action needs to happen at the policy level, at the federal level, at the international level.”

The three athletes, along with Mike Richter, former ice-hockey goaltender and current president of Brightcore Energy, had come to D.C. to testify at a hearing titled “The Fight to Save Winter: Pro Athletes for Climate Action.” Caldwell, Gleich and Jones represented the Protect Our Winters Action Fund (POW AF), a sibling organization to Protect Our Winters. POW AF works to make climate change action a top policy priority by mobilizing members of the outdoor sports community.

The hearing focused on the personal experiences of the athletes, who spoke about witnessing effects of climate change in their environments, and its impact on the outdoor-recreation industry. They brought specific actionable items to the table.

Caldwell focused in particular on the Arctic National Wildlife Refuge. The Refuge covers 19.64 million acres of land and water in Alaska. In 2017, a small provision in the Tax Cuts and Jobs Act opened a 1.5-million-acre section of the refuge to oil and gas development. This year, Representatives Jared Huffman (D-CA), Alan Lowenthal (D-CA) and Brian Fitzpatrick (R-PA), along with nearly a hundred cosponsors, introduced a bipartisan bill, the Arctic Cultural and Coastal Plain Protection Act, that would repeal the provision that opened the refuge to drilling.

During Caldwell’s testimony, the bill passed in the House by a vote of 225 to 193.

The Trump administration this week released an environmental-impact report, staying on track to auction leases for the right to drill in the refuge by the end of this year.

“Having drilling rights in the hands of oil companies would make it more difficult to stop development in the refuge should Democrats take either the White House or Senate and keep control of the House in the 2020 elections,” wrote Henry Fountain for the New York Times. Although the bill passed in the House, it is not currently expected to pass in the Republican-controlled Senate.

Fossil fuel extraction on public lands, and the end-use combustion of those fuels, contributes significantly to overall U.S. greenhouse gas emissions, as detailed in a report released last year by the United States Geological Survey (USGS). In a press release from the Wilderness Society on the implications of this report, Chase Huntley stated, “The US government has kept the American public in the dark for far too long on the climate impact of subsidized oil and gas drilling and coal mining on our public lands…. Our country needs to start taking climate change seriously, and a key element of that is drastically and immediately reducing unchecked emissions that come from public lands.”

In his testimony, Caldwell said, “Opening the refuge to oil and gas development would not only irreversibly destroy the largest national wildlife refuge in the country and deeply impact the outdoor enthusiasts who seek adventure and solitude there, but it would also add significantly to the climate crisis at a time when it is imperative to curb our emissions and adopt clean energy.”

The reality and urgency of climate change have become more and more clear in recent years, prompting outdoor athletes with little previous advocacy experience to feel a responsibility to speak out. POW AF works to educate them on climate-change issues and prepare them to speak to policymakers.

Caldwell said in an interview with Rock and Ice on Friday that he has always tried to be a “relatively responsible human being in terms of environmental issues,” but that political advocacy is relatively new for him. In 2017, he was invited to Climb the Hill—an annual event in D.C. hosted by the Access Fund and the American Alpine Club, focused on educating members of Congress and policymakers on the importance of public lands and climbing management. At first, he said, “I was like, ‘Huh, that seems like a weird idea—why would you want me to go?  …But I went anyways, because I was curious.”

The event changed his perspective. “It was a really cool experience, because I realized that we do have a voice, and the fact that we come in there as athletes brings a different kind of energy, and the meetings kind of stick out,” he said. Since then, he has become passionate in his advocacy work, and is an active member of POW and its climbing-focused division, POW Climb. He has lined up a full slate of presentations on climate change, and he will be back in D.C. this week for Climb the Hill 2019.

“The lobbying work, and the direction of the climbing industry, and the education that I got through companies like Patagonia and POW really impassioned me to go out and get more educated, and once you do that, there’s kind of no turning back,” Caldwell said. “Once you realize the problem, there’s really no choice but to care, and try to do what you can.”

The ski mountaineer Hilaree Nelson, who also traveled to D.C. with POW AF this past week to speak about the Arctic Refuge, echoed these sentiments. “I’ve been a professional athlete for 20 years, and I’ve only started really speaking out on the environment and on public lands in the last few years; I think it just took me, personally, a really long time to have that confidence and find that voice and be willing to take those personal risks,” she said in an interview on September 6. “It’s kind of coming down to where I feel like I don’t really have a choice at this point.”

The impact of our actions on future generations’ lives was a major point in the hearing. “We have a responsibility for future generations, for the children I dream of bringing into this world, to leave them a healthy, viable planet,” said Gleich.

Caldwell implored members of the outdoor community to educate themselves on climate change and to speak out. “When I reflect on the inaction of my generation and how it will negatively impact my own children, I have no choice but to get involved,” he said at the hearing. “There’s a chance that our planet will see such turmoil that things like rock climbing will seem silly. We must turn our passion into purpose. We must shift the culture of the outdoor community so that climate advocacy is a given.”