The following is an open letter to the climbing community on Ten Sleep ethics by three of its original bolters: Charlie Kardaleff, Aaron Huey and JB Haab. They have nearly 400 cumulative routes and 50+ seasons of bolting in the Canyon between them—they care deeply about the Canyon, its history and its future. 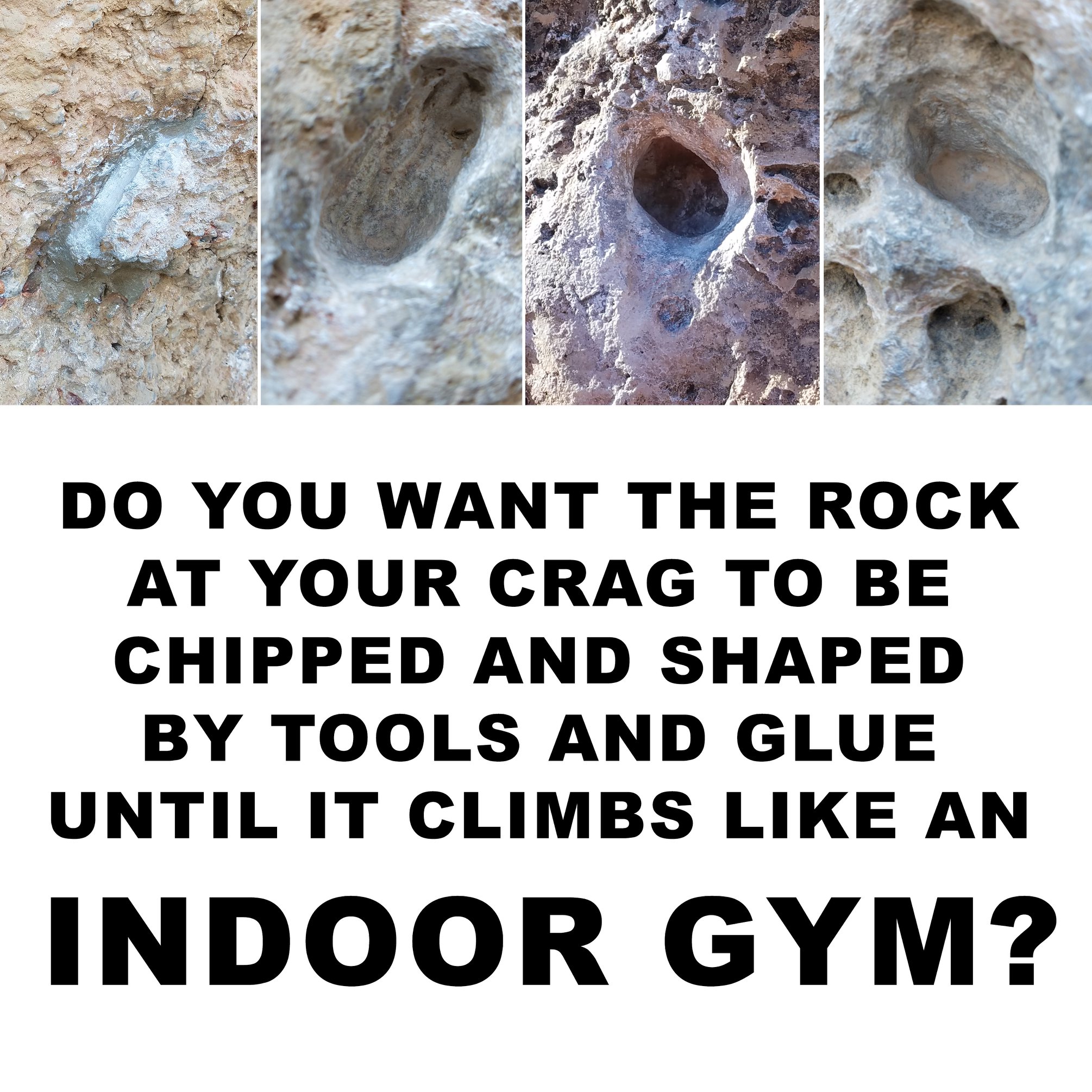 We regret not bringing these issues to your attention sooner, but have been torn on how to bring them forward until we understood the severity and had definitive proof. Over the past months we have received pleas from a number of Wyoming climbers, often accompanied by photos of glue covered holds and what appear to be drilled pockets and chiseled features in Ten Sleep Canyon. A great deal of damage has been done in the Canyon over the past three seasons and its extent is only now becoming clear to us. For the first time in Ten Sleep Canyon history, nearly fully manufactured routes (using what appear to be drill bits, chisels and large amounts of glue) are being openly created and widely promoted. The extent of which is more akin to “route setting” in an indoor gym than route development on natural rock.

Don’t get us wrong, our growing community has experienced questionable ethics in the past, and we have all climbed on routes with a bolter’s dirty secret of an enhanced hold or two. In the eyes of many, developing limestone routes inherently contains some fuzzy grey areas of ethics because of how the rock is cleaned or dulled, but manufacturing holds to create whole crags isn’t a grey area. What once were isolated events of someone’s poor judgement have now become strategic planning on a larger scale to create “climbable walls.”

The Access Fund’s stance on, and definition of, manufactured holds is clear: “The Access Fund opposes intentional alteration of the rock by gluing or chipping for the purpose of creating or enhancing holds. We believe such actions degrade the climbing resource, eliminate challenges for future generations of climbers, and threaten access.”

The issue is big enough that The Bighorn Climbers’ Coalition issued a statement in response to the local community’s concerns: “Manufacturing Holds in Ten Sleep Canyon (Aug 5, 2018) …our organization strongly opposes the intentional alteration or creation of new holds (ie. chipping, ‘drilled pockets’, gluing, etc). In alignment with the Access Fund’s stance on this topic, we firmly believe that these actions diminish the natural climbing resource, eliminate challenges for future generations of climbers, and most importantly, threaten access to climbing on public lands. It is our position that any manufacturing of holds in Ten Sleep Canyon is an unacceptable practice that is counter to the consensus, culture, and norms around ethical route development in the climbing community.”

The ethic that has been followed since modern sport climbing was brought to Ten Sleep Canyon was to do the minimal amount of work to make the route climbable. The idea has always been to discover and equip the route that geological time has delivered us instead of creating movements on an open palate of blank malleable stone. Our Canyon is full of beautiful natural lines, and when those run out we need to stop bolting it. There are already 1000+ routes in Ten Sleep Canyon. When will enough be enough?

We have now heard the excuses from the perpetrators that they were “trying to help create more moderates,” but there are hundreds of four- and five-star routes at 5.10 and under in the Canyon already. How in the world did a new 5.10 go up on the Slavery Wall after 20 years? Aggressive hammering and glue is the answer. How did an entire new crag of 5.11s, and 5.12s go up on a wall we have walked and rappelled dozens of times, and then passed by because the natural lines would have been 5.13s and 5.14s or no routes at all? Are they not robbing from the future, when someone may have been able to climb that natural 5.13 or 5.14?

With this new slide in ethics, all conceivable walls could now be grid bolted and chiseled into submission. This leaves us scratching our heads and wondering if sport climbing ethics have shifted radically from under our noses. Is this acceptable and allowable in the modern era? What will young climbers think? Will they even care? What will land managers think? We have enough to worry about as we watch the impacts that the Canyon’s growing popularity has; isn’t this just going to exacerbate the problem even more?

What also concerns us is that the ones currently doing the most unethical behavior so openly are also encouraging other young climbers to follow suit. Those young climbers now think that this is how bolting is done. Are new bolters going to think that this is the way a crag is developed: by brute force? The Canyon has more developers visiting every year now, with reports of over 30 bolters in the Canyon last summer. We know that not every one of them utilizes the tactics that highlighted here and that it is really only a few developers who are involved to this degree, but our hearts grow heavy thinking about these tactics becoming common practice and acceptable in the years to come. We wonder what the bolters are thinking. What are their motives? Why don’t they see the same dangers as us?

Since last summer we, and others, have addressed these actions directly with these bolters. Our conversations with these folks have caused a whole array of reactions: unabashed acknowledgement, defensive name-pointing, erroneous normalization or deceitful denial. Some have just blatantly said “If you don’t like it climb somewhere else!” as though this was some kind of new normal that has to be accepted. We decided to write this open letter to make it clear that it is not normal and not accepted and it will not be hidden anymore.

This is where we need your help.

We ask now for the climbing community’s support to protect the natural beauty and variety of Ten Sleep Canyon’s walls. Promises that this won’t happen in the future are not enough. We ask now that these crags of manufactured routes be removed from the walls and from guidebooks, to stop the encouragement and normalization of these practices.

To add your name to this important Open Letter, write “Signed” in the comments of this Facebook post!

This Open Letter originally appeared on the Ten Sleep Canyon Facebook page. It is republished here with the permission of its authors.