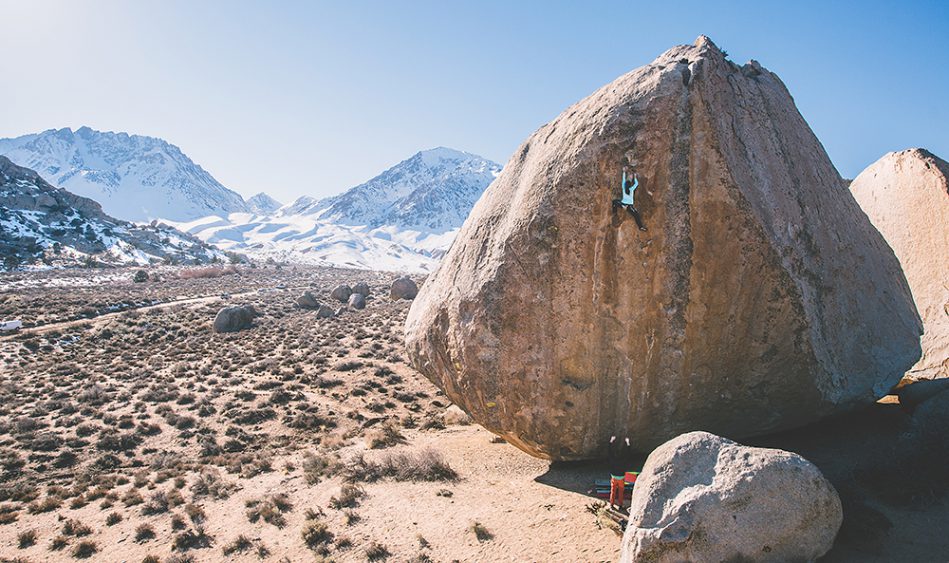 She sent Footprints (V9), another 50-foot highball on the boulder, during her first trip to Bishop in 2015. The following year, she sent Evilution Direct (V11), the right exit variation to Jason Kehl’s 55-foot highball Evilution (V12/13 R).

“After sending Evilution Direct, it dawned on me that Ambrosia was the final ‘king line’ (in my mind) on the Grandpa Peabody boulder,” Williams writes Rock and Ice, via e-mail. “I was wary about taking it on as a goal. I had the curiosity and desire, but being safe is always my highest priority.”

Over the years, Williams has had a complex relationship with the Grandpa Peabody boulder and its three king lines. “The Grandpa Peabody was the first boulder I laid eyes on during my first trip to Bishop,” she writes. “I hadn’t set out to ‘conquer it’ necessarily, or pursue highballs in particular… it was more of a step-by-step process.”

For her first of the “kings lines,” Footprints, Williams tried the upper section on a rope, “just once,” she writes, before committing to the high topout. “The send kind of happened on accident!” she writes. “After I topped out Footprints, I had an immediate physical reaction. I was shaking, whooping, laughing. I felt a rush of adrenaline that overcame me. I hadn’t realized how much fear I was holding in.”

In 2016, when she returned to Bishop to climb Evilution Direct (see video below), she wasn’t as overwhelmed by emotion after topping out. “I felt excited topping out Evilution Direct the next year as well, but it was slightly different. I practiced the line a lot more on a rope, so I had more confidence and knew exactly what I was getting into.” 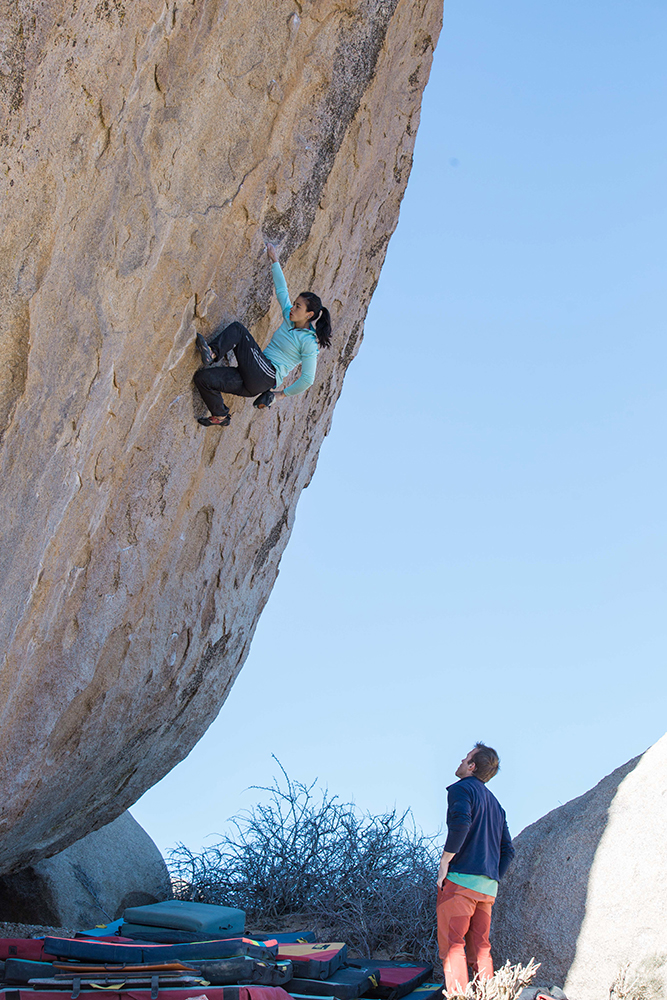 Before her trip to Bishop this year, she says that she was “noncommittal” about Ambrosia. “When I got to Bishop and started trying the moves on a rope, it was like a Tinder relationship,” Williams explains, “Yeah, we’re talking but it’s nothing serious. Just figuring things out. Testing the waters.

“Once I had dialed in the top moves and had done all the bottom moves, it definitely became more of a reality. I went through this systematic way of working the climb that wasn’t about waiting for any ‘right moment’; I was setting myself up to take the moment.”

When she topped out Ambrosia, she “whooped and laughed,” she writes, “but on the inside I felt no emotion, compared to Footprints or Evilution Direct. Just a calmness, almost disbelief that it had happened so fast. I had worked so hard to remove emotion from the process, and had climbed so mechanically that my send had barely registered. My first thought was, Did I just dream that?”

After her ascent, Williams explained her process for projecting Ambrosia over social media. “I decided to explain my thought process over social media for a few different reasons,” she writes. “I feel like the actual process of climbing a highball (vs. the raw emotion) isn’t explained very often (or at all). I wanted to lay out exactly what I did to prepare for the climb, and to show people that it’s not some adrenaline-driven junk fest or off-the-cuff decision. I approached Ambrosia with safety and preparation as priority, and emphasized that I don’t climb these things unless I feel 100-percent.”

In an “Snapshot” interview with Rock and Ice published in issue 231 (January 2016), after sending Footprints, Nina explained how Ambrosia and Evilution Direct were the only highball problems remaining on her tick list, and after climbing them, she would be done with highballs.

When asked yesterday if, now that she had completed the trio, she was indeed finished with highballing or whether the fire was still alive, she told Rock and Ice, “I really did enjoy climbing the highballs. I perfected this method of approaching them, building confidence in myself, and ultimately pushing my own mental barriers. I did say I would stop… but… there’s a lot of big, inspiring lines out there.

“I have another goal in mind but I’m starting the whole process all over again. I’ll check out the moves on a rope. Maybe I’ll do it, maybe I won’t. I can only try.”