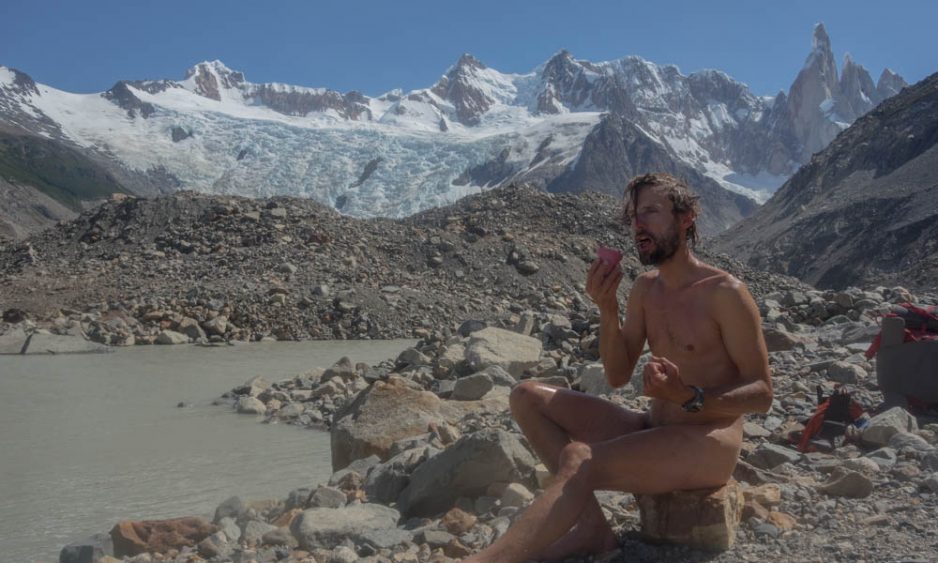 A rare sighting of a Nico Favresse in his natural habitat. Photo: Sean Villanueva ODriscoll.

“I hope you are healthy and able to embrace the shutdown turning it into an opportunity to take a break, learn new things and take some perspective on many things in your life just like when stuck an a big wall in a storm,” Nico Favresse wrote to the team here at Rock and Ice in an email.

Here, he gives us the deets on two new climbs he and Sean Villanueva O’Driscoll did in Patagonia at the end of the season down there and before COVID-19 had changed the world.

Favresse signed off with “All the best and ‘don’t worry, be happy,'” accompanied by the below Instagram post.

With a relatively quiet, warm weather window of two days, we thought it would be ideal to stay cool by attempting something on the impressive shady side/south face of Poincenot. Rolo Garibotti, the author of “Patagonia Vertical,” the local guide book, had pointed out to us a couple of possible new lines which looked promising in pictures.

After an approach of approximately 10 hours, we finally reached the base of the wall, which looked steeper and less featured than it had appeared in the pictures. With no portaledge, three pitons, a couple bolts and two days of good weather, we quickly realized we had not come prepared for such a difficult wall. Therefore our line-finder radar was turned back on and we quickly scanned the wall and found another line 100 meters to the left.

The cracks looked clean and continuous and turned out to be really good. Quickly we discovered other radars had scanned this line before ours: we ran into old pitons, old ropes, rusty bolts and an abandoned broken portaledge. Anyway, we kept going just as if we were the first ones putting our hands in the perfect cracks and enjoyed it!

The crux pitch of the route was a 30-meter offwidth only protectable with a Camelot #6 (for the most part fully open). Although Sean developed a love for offwidth climbing over the years, we rock-paper-scissored for it, and I won. So it was decided that I would lead this pitch. It took me two hours of intense fight, earning every centimeter and engaging all my body physically and mentally to reach the top of the wide crack… Everything after that was just a piece of cake for me. Even the pain caused by all the wounds on my knees, elbows, shoulders and ankles collected during the fight was nothing like fighting for your life in that offwidth. The best thing Sean could say as a show of compassion was to tell me I was obviously lacking offwidth climbing technique.

It turned out we completed the first repeat of a route called Historia Interminable—opened in 1987 by a team of Spanish climbers—and completed its first free ascent. For me it was the first time on top of Cerro Poincenot so I was very happy!

A few days later, another weather window arrived. This time the good weather was combined with high winds, which reduced our options while choosing our next target.

We had the idea to attempt to open a new route on the East Face of Poincenot, a wall known to be protected from the wind. Unfortunately we did not have enough time to recover our gear left behind at Nipo Nino, our advanced camp on the other side of the mountain, so we didn’t think it would be an option. But within a few hours, talking with a few friends and the amazing generous climbing community of Chalten, we managed to gather more gear than we needed for this mission.

The climb turned out to be quite adventurous with lots of wide cracks filled with ice, leaving very few possibilities to protect. We had also a couple of interesting sections with chimneys filled with overhangs of ice leaking like a shower, which we could only overcome with the help of one ice axe, a good rainproof jacket and wet underwear. Thankfully we were happy to find out the Patagonia wind works perfectly as a hair dryer!

I climbed the last pitch and made a belay right below the summit, surprisingly still protected from the high wind. Then we each made a quick crawl to the summit to feel the power of nature and tick Poincenot for the second time.

We named our new route Beggars Banquet because we borrowed all the gear we used to climb it and also after The Rolling Stones’ album.