It’s the young Swiss climber’s first of the grade. 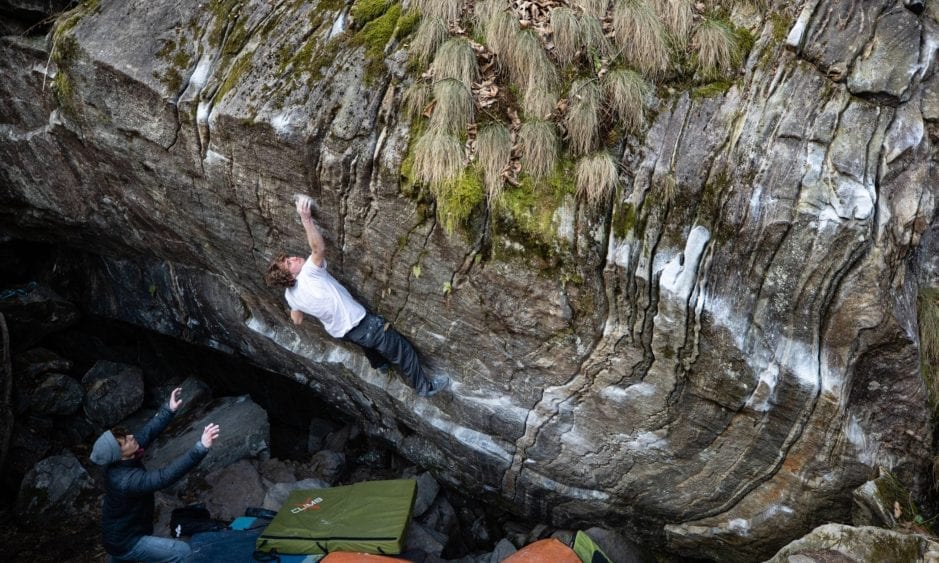 Cameroni on his new V16, Poison the Well. Paul Robinson.Photo:

These Mellow boys are setting a furious pace out on the blocs! Following recent V16 first ascents by Daniel Woods (Box Therapy), Shawn Raboutou (Off the Wagon Sit) and Jimmy Webb (Sleepwalker), Giuliano Cameroni is now getting in on the action with his YouTube partners in crime: He has made the first ascent of Poison the Well, in Brione, Ticino, Switzerland, and suggests 8C+ (V16).

The 21-year-old from Switzerland told Rock and Ice this morning, “I tried it for eight days, which is a solid amount of time in my opinion. I had to rest a lot between sessions because I always need to be 100% in order to give it good tries.”

Poison the Well ascends a 40-degree overhanging wall and is the direct variation of a problem called Pamplemousse (8A/V11). This direct line has been a well-known project in Ticino for over ten years. “There aren’t any tricks,” Cameroni said. “The only thing you need is power and finger strength. There are seven moves, but the crux revolves around the fifth and sixth moves, which by themselves are 8C [V15].”

Cameroni explained that sticking the crux hold perfectly requires a little bit of luck, but that he maximized his chances of sending by focusing on a few things. “The key was building specific muscles in my shoulders, being patient and waiting for the good conditions!” he said.

While this is his first V16, he’s amassed a healthy number of V15 ascents over the past five years, so certainly knows what the next level should feel like. Cameroni climbed his first V15 in February 2014, when he sent the classic Dave Graham problem The Story of Two Worlds, in Cresciano, Switzerland. He really kicked things into high gear in the summer of 2017, though, when he made the first ascent of another old Dave Graham project, Hazel Grace, in Gottardo, Switzerland, at V15. Over the next 12 months, he added three additional V15s to his resume: The Big Island, Fontainebleau, France; The Smile, a first ascent in Rocklands, South Africa; and Black Eagle SD, also in Rocklands.