French and Swiss team opens a new route up the thought-to-be unclimbed north summit of Tengi Ragi Tau. The climb up the west face conquers steep, mixed terrain with crux pitches before the top. 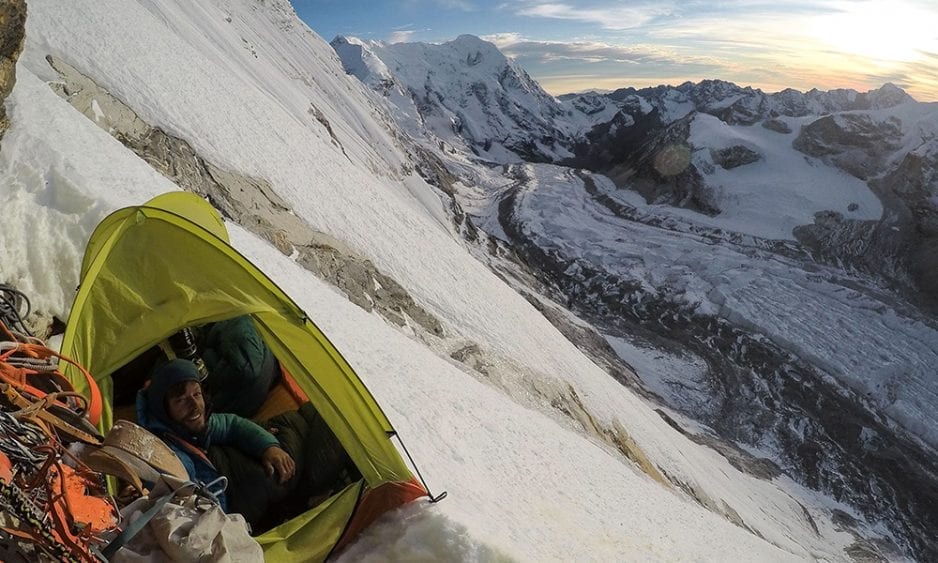 Charles Noirot (FRA), Symon Welfringer (FRA) and Silvan Schüpbach (SUI) established base camp on October 8 beside the Trakarding Glacier at 4,700 meters, in the Rowaling Himalaya, Nepal. During acclimatization, the line they initially hoped to climb was plucked from beneath their noses: they witnessed the first ascent of Tengi Ragi Tau’s west face by the Americans Tino Villanueva and Alan Rousseau. Due to this new development, the team opted for another line further north, still on the same wall. They would try to reach the slightly lower north summit.

[Also Read Interview: Marek Holeček On The First Ascent Of The Northwest Face Of Chamlang]

On October 16, as they finished acclimatizing and returned to base camp, Noirot became extremely ill. He sat out the rest of the expedition.

During the following days, Welfringer and Schüpbach hoped to launch an attempt on the mountain, but were continually foiled by snowfall and high winds.

On October 26, they finally set foot on the wall. Their first climbing day included two pitches of steep ice, followed by moderate snow and ice slopes up to 60 degrees. Welfringer and Schüpbach established camp on a small ledge at 6,100 meters. Wind and spindrift accompanied the pair all day long.

On day two the weather got better, but the steepening wall, technical pitches and the thin air slowed progress. The two climbers had troubles finding a bivy spot, but eventually succeeded in finding a good place to pitch their tent at dusk at 6,450 meters.

The next morning, the start of day three, they set out on a summit bid, leaving their bivy gear behind. Here they encountered the hardest, but finest, pitches on the route, with a variety of steep ice, technical mixed terrain and ice fluting. They reached the north summit that day, the altitude of which was 6,820 meters according to their altimeter.

Welfringer and Schüpbach rappelled back to the bivy by headlamps and spent one more night on the west face. The next day they rapped 1,00 more meters to the base, arriving back in base camp the day before the end of the expedition.

Marek Holeček Does Beautiful FA in Peru Under a Burning Sky