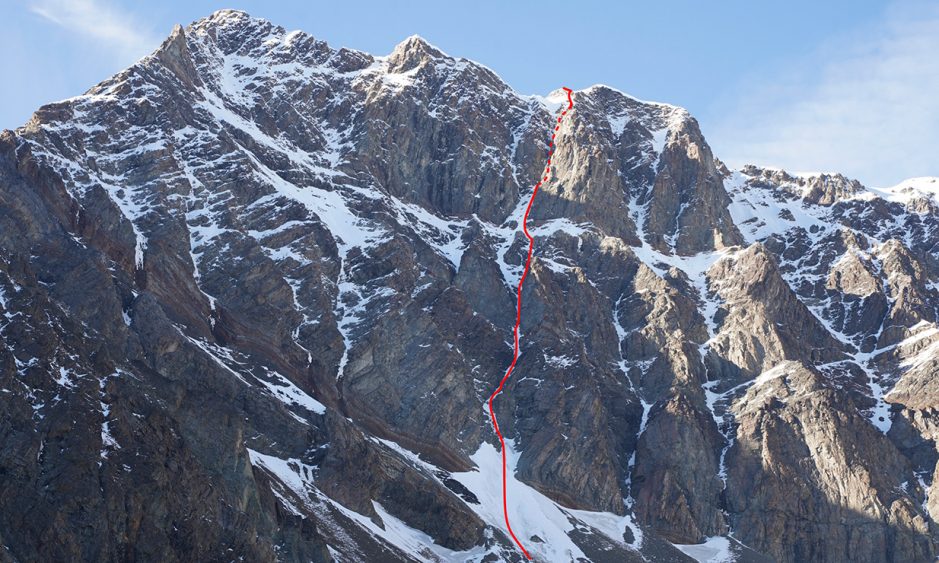 The high alpine in many of Alaska’s mountain ranges is a challenging and risky environment that has a storied history of being the venues of many world class adventures. The lowlands are thick, wide, and present their own difficulties from bush whacking to swamps, from aggressive animals to river crossings. There is an endless beauty in the land, it is so rugged and raw. Having grown up somewhere else, Alaska is for me what it was in books: a wild land.

For these reasons and more, Alex Hansen and I (Benjamin Lieber) have been dedicating all of our efforts to traveling to these great and little-explored ranges. So much so that I now reside in the Hayes Range at a wonderful wilderness getaway, The Lodge at Black Rapids. This summer I became curious about autumn climbing in the big mountains and invited Alex to join me.

In mid-September we hired the Bush Pilot Jesse Cummings from Delta Junction to take us on a wild recon flight through the Hayes Range. We weaved past nearly every major face and ridge in the range over two hours in the small aircraft. During the latter part of our flight, we saw a lesser peak north of Mount Deborah at the Gillam Glacier. On its Southeast Face was an array of ice flows seeping from couloirs and cliffs.

Just two days later I hopped in a two-seater super cub with Jesse, a duffel on my lap, and with a wild logistics plan in store to go mount an attempt on the mountain we had seen.

Traveling in the fall means no ski planes can land in this area. Instead we landed seven miles below in the tundra. In an effort to get all of our equipment to the face without suffering, we decided to emulate a style used by Bradford Washburn: push our bags out of the plane and let them free fall to the Tundra benches below the mountain. With the clam-shell door open, blue skies overhead, and Mount Deborah watching over us, Jesse and I buzzed into the valley and chucked the bags. An hour and a half later, after throwing more bags, Alex joined me in the tundra and we said goodbye to our trusted friend Jesse.

We were alone in the Hayes Range. An incredible feeling. The hike took us along moraines and low grasses, hugging the Gillam Glacier and eventually up rocky slopes to our equipment which we found in the early evening.

The next morning we set off early under gray overcast skies. Climbing conditions were perfect.

The route we opted for was a beautiful gully with ice and snow running top to bottom. In several places it choked to nearly two feet wide with steep ice cascading down the chute. The beauty in new routes is the unknown of how hard it will be, where those difficulties are, and how to get down at the end. Our route presented all of those questions but the going was generally straightforward.

A north wind and long blimp-like clouds greeted us when when we pulled onto the summit. We had planned to descend the East Ridge, but as is true in many parts of Alaska, this ridge was the real deal. Winding cornices & Mushrooms topped steep exposed slopes and a fresh powder awaited us. We quickly opted to rappel the route instead and had a smooth descent, reaching camp at nightfall.

On our third day, we woke to changing skies and heavy winds. It was time to go home.

Shouldering all of our equipment, we slogged back to the air strip, and even encountered a wolverine along the way. Arriving in the early evening, rain began to overtake the valley. Miraculously we found a hunting shelter, but it had no roof, just a frame. For the next few hours we went to work prepping it with tarps for the rain. As night fell, we were dry, warm, and had music to accompany us.

On the fourth day, our pilot Jesse came back for us and one by one we flew away from the mountains. It was a special experience to see our recon flight turn into a logistics operation and eventually into a new route.

Our climb is the opening trip of our new pursuit: Alaska Wilderness Project. AWP is a multi-year journey to the far-reaches of Alaska where modern climbers will seek to embody the timeless spirit of Alaskan alpine climbing. Offering a historical review of its past, we will try to connect the dots to its possible future.