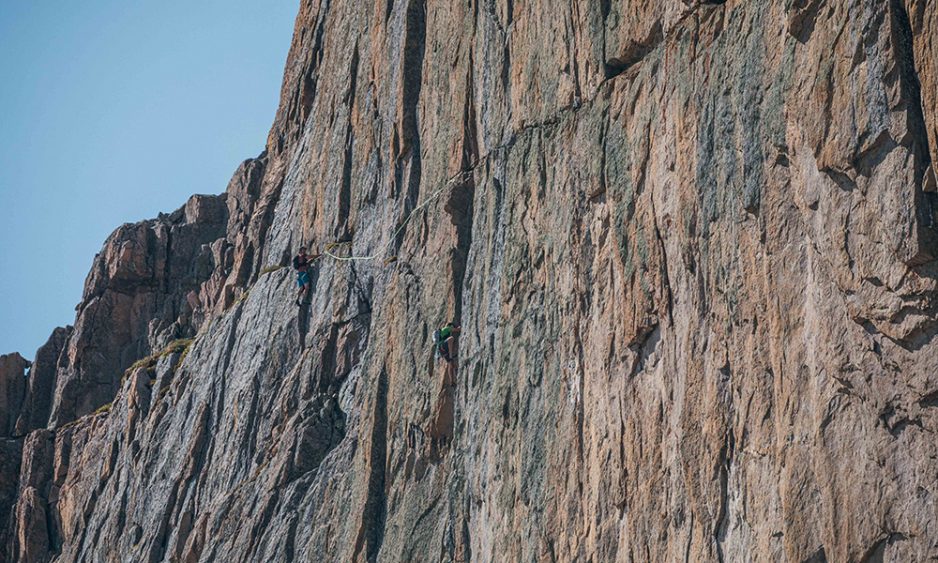 What’s the key to climbing fast? Rupturing your A4 pulley, it would seem. Or at least something like that, according to Wade Morris.

After blowing out that oh-so-valuable band of finger fibers earlier this spring, Morris put his hard climbing projects on hold, started running more and logging lap upon lap of classic moderate climbs around the Front Range. It all culminated in a new speed record yesterday, when he and another Front Range speedster Stefan Griebel put up the fastest known time on The Casual Route (5.10-), the Diamond, Longs Peak, Rocky Mountain National Park.

Morris and Griebel did the roundtrip—which involves 10 miles of running and 5,000 feet of vert (including 7 pitches of technical climbing on the East Face)—in 3 hours 53 minutes 59 seconds.

Rocky Mountain National Park has been in the climbing news a lot this summer. Less than a month ago Tommy Caldwell and Alex Honnold completed the Continental Ultimate Divide Linkup. Tragically, a climber fell to his death from Broadway Ledge on the Diamond last Thursday.

Rock and Ice caught up with Wade Morris and Stefan Griebel yesterday to hear about this latest feat—what went into the record and the climb itself. Both were in high spirits.

“I don’t think I would’ve tried this if I hadn’t injured myself and started running more,” Morris said.

Griebel, who has held speed records on other Front Range classics, said, “It’s so fun! It’s the best one-pitch route on the Diamond!”

The Casual Route has some great history with legendary names attached to it. Duncan Ferguson and Chris Reveley made the first ascent, all free, in 1977. They named their line The Integral Route.

In the summer of 1978, Charlie Fowler came along and free soloed it. His description of the outing as “casual” is widely credited for the route eventually becoming known instead as The Casual Route.

While The Casual Route was occasionally speed climbed as a leg of the informal Longs Peak Triathlon—conceived by Bill Briggs, the challenge involves biking from Boulder to the Longs Peak Trailhead, running to the base of Longs, climbing the peak by a technical route, and then making the return trip to Boulder—it wasn’t until Dean Potter set his sights on the the route in 1999 that speed climbing really came to the Diamond.

That summer, Potter set a trailhead-to-trailhead speed record on The Casual Route of 3 hours 59 minutes, soloing the route. That record has stood for over 20 years—in part because no one seems to have mounted a real effort to break it.

One of the factors that convinced Morris that the record could be bested was Anton Krupicka and Stefan Griebel’s fastest known time for the Longs Peak Triathlon of 9 hours 6 minutes. That included a trailhead-to-trailhead split on The Casual Route of about 4 hours 30 minutes.

Morris thought to himself, If they could do it that fast after biking 40 miles with serious vertical gain, surely we could go under 4…

A few weeks ago, Morris and Maury Bridwell hucked a car-to-car lap on The Casual Route in 4 hours 57 minutes.

“I realized it could go a lot faster,” Morris said.

Now it was just a matter of finding the right partner and the right time. Griebel was an obvious choice. He has held speed records on The Naked Edge, Eldorado Canyon; the First Flatiron and the Third Flatiron, above Boulder; and various other linkups in the Flatirons.

“There aren’t many people I’d want to do it with in this style, with such a limited rack,” Morris said, “I think Stefan is the partner who I’ve simuled with most, around Eldo and a little bit in Rocky.”

They put in two other burns together on the route this season before leaving the trailhead yesterday morning for a third attempt. They ran up to Chasm Lake, kicked steps up the Mills Glacier, soloed up the North Chimney to Broadway Ledge, and stopped to change into their rock shoes. It took them 1 hour 44 minutes to Broadway.

“You get to Broadway and you’re like, ‘Thank god!’ because you finally get a little break,” Griebel said.

From there they tied into the ends of their 30-meter rope, racked up with five cams, six carabiners, two quickdraws, and two Microtraxions, and started simuling up The Casual Route.

They made the simuling “as safe as we can make it going that fast,” Morris said.

“There’s always a couple of  pieces between us,” Griebel said. “You know the whole story of Jason Wells and Tim Klein,” he went on. Those two died in a fall from El Cap in 2018, likely while simul-soloing. Griebel was close friends with Wells. “I’m fully against simul soloing,” he said, “and Wade isn’t into that either. We’re pretty critical about what we’re doing, to make sure that something like that doesn’t happen.”

Most of the climbing on the Casual is quite moderate, especially for strong climbers like Griebel and Morris. First there’s a 5.9 finger crack and then a 5.7 traverse. Next comes a 5.8 squeeze—“The crux of the route!” Griebel exclaimed, despite the lower number attached to it than the 5.10- pitch higher up. Then more easy climbing in the 5.6 to 5.7 range, followed by a 200-foot 5.8 dihedral handcrack.

“That pitch is the best climbing on the Diamond,” Morris said. “It’s awesome.”

After that comes another short squeeze—the one spot the team had a small setback.

“After I’d climbed maybe five or ten feet in the squeeze,” Morris said, “the last two cams on my harness somehow detached and dropped to the base of the Chimney. So I had to down climb to get the cams.”

(Griebel chimed in, “I think the cams came off because we were using these special harnesses Wade ordered us from Victoria’s Secret. Seriously though, these lightweight harnesses are like lingerie. I think they weigh 90 grams each—that’s less than my wallet.”)

The most special moment of the day came when Morris pulled himself up onto Table Ledge, where he saw three ravens perched on the other end, watching him.

He said, “You’re like 200 feet shy of the summit of Longs at that point. The raven was Dean’s spirit animal. It’s kind of like Dean was watching us.”

After summiting Longs, the pair barreled down the mountain.

“The run down is just about survival for us,” Morris said. “If you look at the really fast runners—the Anton Krupickas or Kyle Richardsons—their best times are in the low 40s, and our best time last week was 55 minutes.”

Yesterday Morris and Griebel’s split from the summit back to the trailhead was 56 minutes, but it was still enough. They had set a new record.

The photographer Alton Richardson, a friend of the guys, was across the way on Chasm View Wall walling shooting their speed-record attempt.

“Watching Stefan and Wade cruise the Casual Route in less time than it takes most just to rack up for the first pitch is a moment in the mountains I won’t soon forget,” Richardson told Rock and Ice. “There is a certain synchronicity that it takes in a partnership to move on rock like that and a majority of climbers will never experience it. Wade and Stefan have harnessed it, tied it in and sent it off on the sharp end.”

Griebel’s one request at the end of the interview was to “not make too big a deal” out of the new record. “Tomorrow someone else could easily go take it down,” he said. “It’s just so much fun.”