A helicopter was only able to deposit Polish rescuers at 4,800 meters, meaning they will have to climb through the night to reach Elisabeth Revol who is trying to descend further from her bivy at 6,700 meters. Tomek Mackiewicz is considerably higher at 7,300 meters with poor weather forecasted in the coming days. 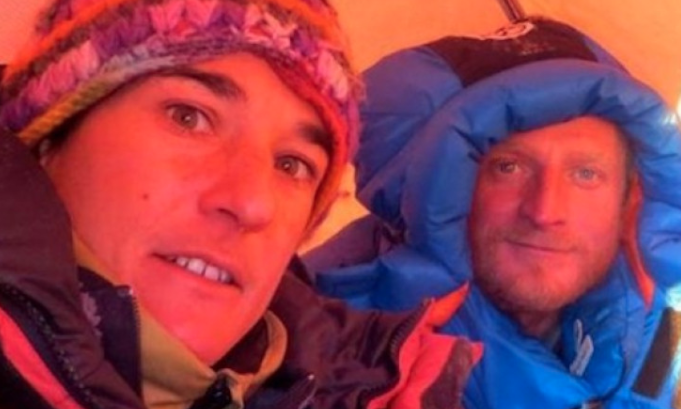 Elisabeth Revol and Tomek Mackiewicz, the two climbers currently stranded on Nanga Parbat. Members of a Polish expedition to K2 are making their up the mountain as part of a massive rescue operation.

An update from the GoFundMe campaign: “Urubko and Bielecki are with Elisabeth [Revol] – info from two other climbers who are there and have radio contact with them. We are crying from happiness.”

Revol will be evacuated as quickly as possible. No word on what the plans may or may not be regarding getting to Mackiewicz. Weather on the mountain is supposed to turn for the worse at 11:00 am Pakistan Standard Time—roughly nine hours from the time of this update. In a perfect world, rescuers and rescued would be off the mountain by that point.

Editor’s Note: The following update has been pieced together largely from roughly translated quotes from Polish newspapers and Facebook posts of individuals associated with both the Nanga Parbat expedition and the Polish K2 expedition. For background on the situation currently playing out on Nanga Parbat read Rescue Effort on Nanga Parbat For Stranded Alpinists.

Organizers of the GoFundMe fundraiser to support the rescue efforts have raised the target to €100,000. Currently, the total stands at approximately €75,000. To donate visit https://www.gofundme.com/rescue-on-nanga-parbat.

A tense night brought another day of frustration and desperatness for the rescue effort to bring down Tomek Mackiewicz and Elisabeth Revol from the flanks of Nanga Parbat; frustration from bureaucratic wrangling and feet-dragging, uncooperative weather and the ticking clock.

Mackiewicz spent the night of January 26 in a tent at roughly 7,280 meters (near Camp 4), where Revol had left him and begun descending. Revol spent the night near Camp 3 at approximately 6,700 meters. Mackiewicz is suffering from snow blindness and frostbite, and Revol is now reported to have severe frostbite on her left foot, too.

Negotiations with the Pakistani authorities slowed the rescue efforts on the morning of Saturday, January 27. In an interview with the Polish Newspaper Gazeta, Piotr Pustelnik, the President of the Polish Mountaineering Federation, called the authorities’ actions in waiting for a financial guarantee before initiating rescue efforts “shameful.”

Eventually, helicopters took off from Skardu, picked up the final team of four rescuers from the K2 expedition—Adam Bielecki, Denis Urubko, Piotr Tomala, Jarosław Botor—and transported them to Nanga Parbat. While the helicopter was en route, an update on the GoFundMe campaign, posted at roughly 4:30 pm Pakistan Standard Time (PST) on January 27, explained, “Helicopter is 30min away from Nanga Parbat [Basecamp]. Message from Elisabeth [Revol]: ‘I am OK, very thirsty and hungry’.”

In the same update, Masha Gordon, a fellow alpinist and an organizer of the fundraiser, wrote, “We have increased campaign target to account for further rescue of Tomek and medical expenses. Please share the post.”

Ludovic Giambiasi, a member of the rescue operation, posted on Facebook soon after, “Helicopter rescue without success (fog). They are trying to reach camp 1 (be carefull altitude), they try to reach it tonight. New attempt tomorrow with helicopter. I have now lost communication with Elizabeth. She’s out of battery power. On her last messages she told me that there was fog and that she could not see or hear the helicopter. I want to believe it again. For Tomek, I don’t think we can have any more hope. This is a tragedy. I’m deeply affected.”

While the helicopter could not reach Revol, according to the most recent GoFundMe campaign update posted at approximately 7:30 pm PST, it managed to drop Denis Urubko and Adm Bielecki off at 4,800 meters near Camp 1.  Urubko and Bielecki’s last known position at that time was 5,225 meters, but more recently—at roughly 9:00 pm—they were reported to be at an altitude of 5,600 meters. Though that is 1,100 meters below Revol’s bivy location last night, Giambiasi reports on Facebook that, in another of her last communications before her battery died, Revol said she would try to descend further down the mountain: “I’m trying to get off as long as there are ropes.”(Note: The rescue team has requested that concerned followers not attempt to track the Polish rescuers’ progress via their GPS trackers online, as it is interfering with their ability to accurately track and aid the rescuers themselves.)

Urubko and Bielecki are two of the strongest alpinists in the world and both are already acclimatized from the early stages of their K2 expedition, so the hope is that they will be able to move fast through the night and reach Revol sometime tomorrow. If the weather clears, the other rescuers will attempt to reach Mackiewicz.

The most recent GoFundMe update concludes on a hopeful note about Revol: “We believe in the strength of her spirit.”