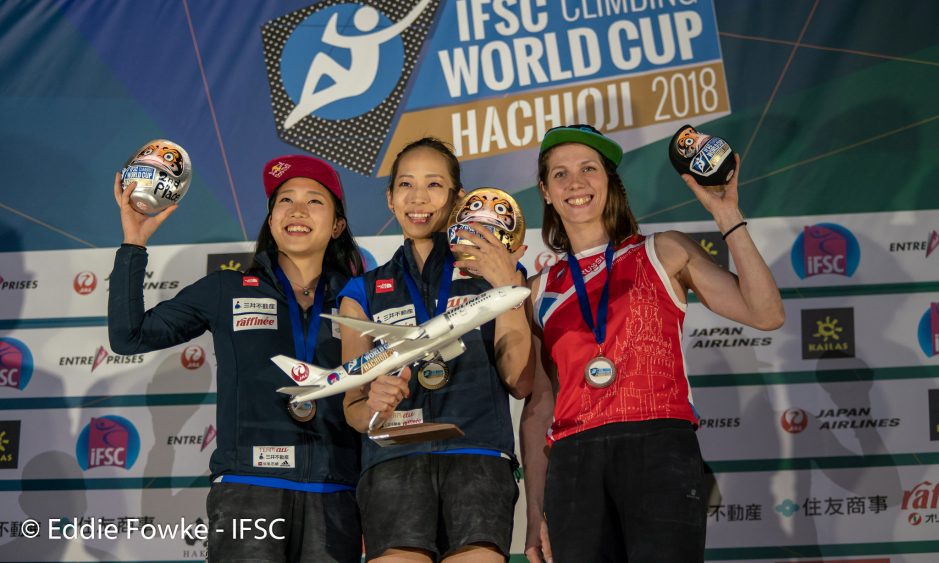 The IFSC World Cup in Hachioji, Japan took place last weekend, June 2. Either the men’s problems were savagely difficult or the men weren’t up to snuff (probably the former): the six men’s finalists only shared only five tops between themselves out of the four problems.

The Italian Gabriele Moroni rocketed to first place after cruising through the starting slab problem, which stumped the other finalists. Next, the Korean Jongwon Chon took the sole top of the steep M2 and hopped onto the leaderboards with Moroni. With a mere 10 seconds on the clock for M3, Rei Sugimoto of Japan made the only top which, in addition to three zone points, got him the bronze.

Though Tomoa Narasaki of Japan managed to flash the final problem, temporarily jumping into the lead, Moroni went on to flash M4 as well, pushing Narasaki to second place. This flash made Moroni the only men’s finalist with more than one top, and netted him the gold. This was Moroni’s first gold medal, and the Italian is in the 14th year of his World Cup career. “I still can’t believe it,” an ecstatic Moroni said when interviewed by the IFSC post-comp. “It’s crazy. I’ve been waiting for this moment forever.”

Another exciting turn of events was Ekaterina Kipriianova’s bronze medal in the women’s category, her first World Cup medal. The Russian topped the first two problems but took a fall just shy of the zone hold on W4, still clinching third place. The Japanese climber Miho Nonaka, who took three silver medals in a row prior to Hachioji, flashed W4 for her third top of the finals, which put the heat on leader Akiyo Noguchi. Unfortunately for Nonaka, her Japanese teammate managed a flash herself, securing Nonaka another silver medal. Noguchi, having finished first in the qualifiers, the semis and the finals, won her 21st World Cup and her third in a row.

(All-star problem award goes to an apparently brutal W3, which thwarted all attempts to top it. In fact, in all three rounds of the Hachioji Cup, W3 was the only problem Noguchi did not manage to complete. Nice going, W3.)

Post-Hachioji, the Slovenian Jernej Kruder still leads the men’s World Cup season rankings with 345 points, followed closely by Narasaki at 331 and then Aleksei Rubtsov at 259. Moroni’s Hachioji win brought the Italian up to seventh place at 181 points. In the women’s rankings, Akiyo Noguchi and Miho Nonaka are neck and neck, with 430 and 420 points, respectively. The two Japanese have already clinched spots on the end-of-season podium, even with two events to go. Their closest competitor is Fanny Gilbert, of France, at 250.

Stay tuned for the Vail World Cup this weekend, and see the Hachioji top podium results below. -Owen Clarke