Moonlight Buttress, the World’s Best Crack, Soon to be Bolted

The famed crack climb of Moonlight Buttress to be bolted due to insurance liabilities to the National Park System. 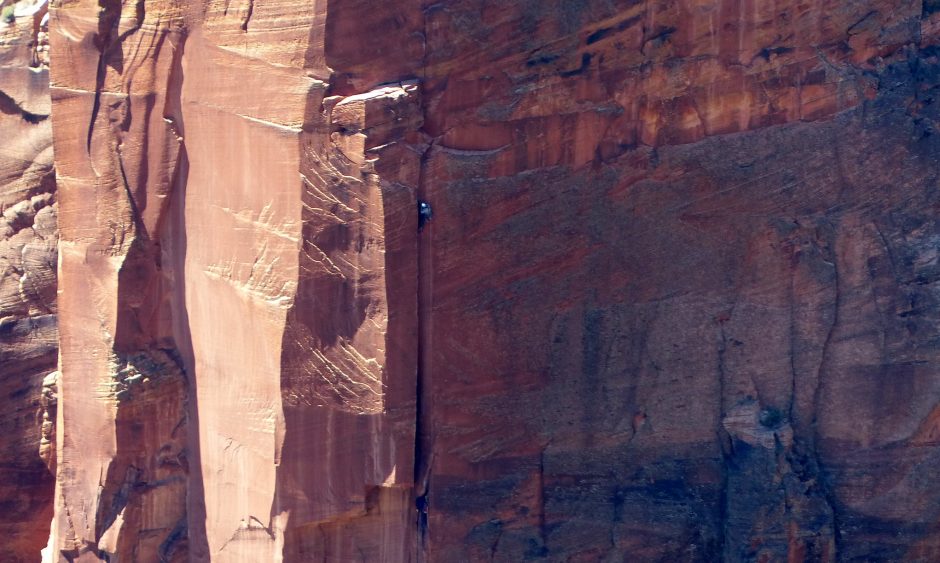 Moonlight Buttress, often considered the world’s best crack along with the Salathé Wall, is currently under review by the Zion National Park authorities to be fully bolted.

The National Park system is under pressure to minimize lawsuits and decrease insurance. The governing boards have concluded that bolting all desert cracks, starting with Moonlight, is a step in the right direction.

If the measure passes, the 1,200-foot thin fingers hand crack will get a bolt every four feet, per climbing gym regulation UIAA EN852a. As the editor of Rock and Ice, I feel that anything less would be irresponsible. In truth, a bolt every three feet would be ideal.

As the newest addition to the history of climbing, trad climbing needs to be regulated. Only when it is fully regulated can it be safe and less adventurous. Adventure does have a place in climbing, just not in the act itself.

The use of auto-belays is also being considered to improve climber safety.

Of late, certain auto-belay manufacturers have been lobbying to have their machines installed on cliffs around the United States. These auto-belay manufacturers are reported to be acting like mini-mafia organizations, working in the shadows with piles of hush money, double agents and even the contract hiring of Eliza Kokova, who worked on behalf of the Kremlin to help get our current president elected.

In particular, it seems likely that Freerider (soft 5.13a—sry Alex—3,300 ft, Grade VI) one of the most mini-traxioned routes in the world, will have auto-belays installed at every belay station. The installation of auto-belays will make it more efficient for average climbers to clog the route and waste months away trying to crack climb and be the next Honnold.

Should the auto-belay lobby come up short, because of its clean crack system Moonlight Buttress (hard 5.12c, 1,200 ft, 10 pitches) is an obvious candidate for a full-on bolting assault. To fully bolt the route, about three hundred bolts would be required, a small price to pay.

“Moonlight should totally be bolted,” says Gertrude Hinsler, a beginner climber at Rock Country Climbing Gym. “That way me and my friends can go to Zion on a family camping trip and we can totally session on it and dog it for days.”

Not bolting cracks amounts to elitism. When you need to place gear, you need to have a level of expertise. That in itself prohibits vast numbers from getting on the route.

Before there was crack climbing, there was face climbing. At first, the sport climbers of the 1980s bolted difficult face climbs, then they started to look at cracks when the face climbs ran out. Sometime in that era, manufacturers and gear engineers invented ridiculous things like cams, pitons and Stoppers, to help protect the cracks.

But quickly, it became apparent how big of a pain-in-the-ass trad climbing is.

For starters, it’s expensive. A decent trad rack can be thousands, whereas a rack of draws can be as little as a hundred bucks. You need experience and judgement as well to place trad gear, which isn’t easy to acquire. Trad climbing is a junkshow, to be honest.

We can credit Dierdre Hoffman, a French climber, with the idea of bolting cracks.

“When I first came to the United States, I saw that they were carrying up all kinds of heavy gear to crack climb. How stupid!!” Dierdre said.

It was a small revolution. At first, face climbers really looked down upon lycra-clad crack climbers as inferior.

There is also the issue of weight and complexity.

“I’ve done so many cracks, and I’m just so tired of having to think about the gear,” said Robby Young, a self-proclaimed “last dirtbag,” with his 234 Instagram followers. I met Robby, 22, a Philadelphia native, in the parking lot for Moonlight. He was watching “Jersey Shore” and combing his hair in his Audi sports-car when we spoke.

Zion National Park is also looking into gear vending machines at the base of climbs to mitigate the risk of gear not authorized by the National Park system.

Francis can be found on Insta, FB and Twitter.

It is not necessary either to have gear or to bolt. Here is the “oneness with nature and your environment” way of climbing. You kill a deer with a handmade bow and arrow. Then you use the deer hide to make slings. Then you search the ground for the right size rocks to jam into the crack. All you need is a rope and caribiners. No harness they are for wimps