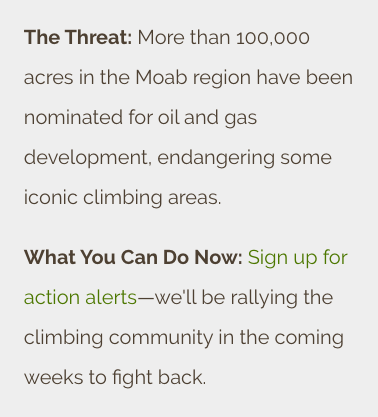 This past winter, one small oil and gas company—Prairie Hills Oil and Gas, LLC—nominated thousands of acres of Bureau of Land Management (BLM) land across the Moab area for leasing, hoping to gobble up all available leases in the area. The 230 nominations blanket more than 100,000 acres to the west, north, and south of Moab, and when combined with the hundreds of federal and state oil and gas leases that already exist in the area, nearly every acre available for leasing is either leased or will be proposed for leasing in an auction this September. The majority of the parcels up for auction will likely go for the minimum bid of $2 per acre.

If the oil and gas industry has its way, some of Moab’s most iconic and well-known climbing areas could be impacted—like Long Canyon, Kane Creek, Potash Road, Courthouse Towers, Mineral Bottom Road, Hell Roaring Canyon, and Lost World Butte.

These areas would also house drilling rigs and other industrial infrastructure, a large volume of truck traffic, and poor air and water quality. Iconic views will be compromised, and recreation will take a hit.

Part of the unique value of the Moab region is its vast swaths of public land. The Moab field office of the BLM oversees 1.8 million acres of federal land in the region, an area rich in recreation opportunities that fuel a thriving tourism economy. Under federal law, anyone can “nominate” a parcel of these federal lands for oil and gas leasing, which triggers a land-use review process to determine whether the nominated land should be auctioned off to oil and gas operators.

For years, these leasing decisions have been guided by the BLM’s Moab Master Leasing Plan (MLP), which outlined balanced management of oil, gas, and potash development, while protecting recreation opportunities. However, that balanced approach changed after the Trump administration declared its “Energy Dominance” agenda in 2017. Although the Moab MLP technically remains the law of the land, new master leasing plans were eliminated, and the Department of the Interior made sweeping policy changes to grease the skids for more oil and gas development—including expediting environmental reviews, allowing fewer opportunities for public input, expanding the geographic scope of parcels eligible for leasing, and requiring the BLM to auction nominated parcels quarterly. Since these changes went into effect, nearly every nominated parcel has been approved for auction and subsequent development.

Moab is home to one of the most successful recreation economies in the country, if not the world. And this success is no accident. Moab businesses and elected officials have worked hard to balance public land use among user groups (such as motorized and nonmotorized recreation), as well as balance recreation activity with resource-extraction activity, such as potash mining, oil and gas developments, and uranium/copper mining. But this careful balance is on the brink of being compromised.

The administration’s aggressive energy dominance policies, combined with the current low price of oil, means just one interested bidder in the BLM’s September auction could lay claim to more than 100,000 acres of recreation-rich lands around Moab, keeping them tied up in oil and gas leases for decades.

This could seriously impair the Moab community’s economic lifeblood—outdoor recreation—and compromise iconic climbing experiences in the region. The BLM is moving forward with an environmental assessment to propose many, if not all, of these nominated oil and gas leases.

Access Fund will be rallying the climbing community in the coming weeks (as we wait for the BLM environmental assessment) to push back on these leases. Please sign up for action alerts now, and stay tuned for a call to action. 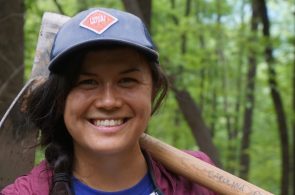