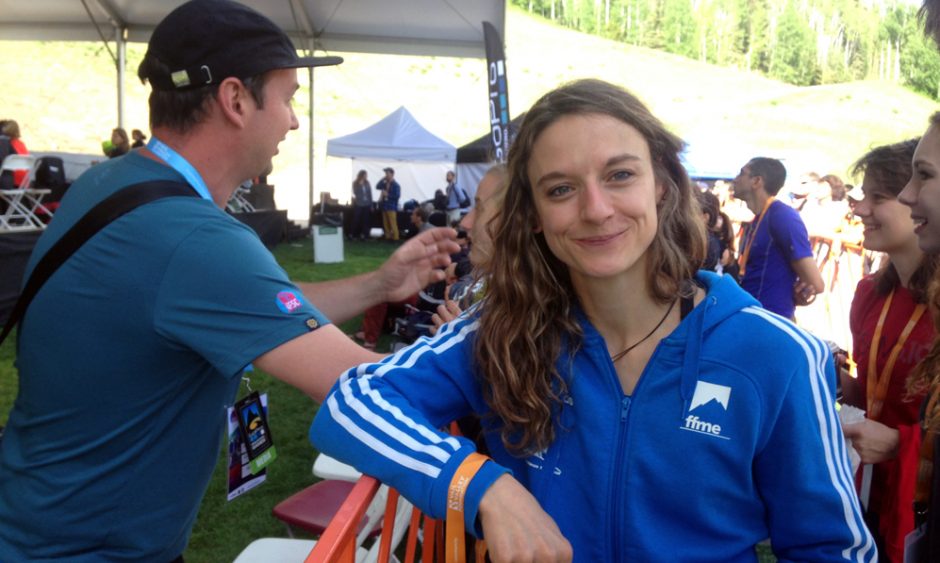 Le Nevé ringside at the GoPro Mountain Games, one of her arenas. Photo Alison Osius.

As Mélissa Le Nevé stands beside the wall watching the men’s qualifiers at the World Cup at Vail, Colorado, passing climbers ask if she’s jetlagged. She smiles, shakes her head. She slept fine: from 10:30 last night until 8 this morning.

“My sleep, I pushed it forward,” she says in calm, friendly tones. Each day for a week before the trip from France to the GoPro Mountain Games, she stayed up until 3:00 or 4:00 a.m. and slept late. “For Asia, I push it back. I try to go to bed at 7:00 or 8:00 in the evening.” Her eyes widen and she laughs. “It’s super hard.” She says the prep doesn’t always work, but trusts in her “capacity for adaptation.”

Le Nevé, 26, entered the Vail event sitting third in the overall IFSC World Cup rankings, behind Shauna Coxsey of the U.K. and Miho Nonaka of Japan. She placed eighth in qualifiers and will move on to semi-finals, which begin at 10 a.m. Saturday. For her, unlike many top World Cup competitors, climbing real rock is mandatory.

She calls real rock “part of balance,” especially given that she may not compete for many more years, though she is particularly enjoying it this year. The Vail event is second-to-last in the Bouldering World Cup series. She both boulders and lead climbs on real rock.

When asked about possibly climbing Güllich’s opus Action Directe, likely the world’s first 9a/5.14d, also in the Frankenjura and not yet done by a woman, she cannot help smiling though she hesitates at first to talk about something she has not done. Still, she has tried it and speaks openly about an effort last fall that was both encouraging and a minor disaster. “I trained very hard,” she says—but didn’t rest between one day and the next. “The first day I did the [route’s] jump, which is the crux for me. I felt very bad on the crossover move”—to a two-finger pocket, a move that created pain in her palm below the ring and long fingers—“and had to stop.” She climbed the next day anyway, and tore a pulley in her finger.

“I always had very strong fingers,” she says ruefully. “I thought, This will not happen to me. I didn’t want to listen.”

She intends to go back to the route, right after the Vail event and possibly in October, when crisp rather than humid conditions are likely to offer the best chance.

While the potential inclusion of climbing in the 2020 Olympics would keep Le Nevé in the comp game to seek a berth, she looks forward now to a time of more comprehensive climbing.

“There is a lot of very good rock climbing in the United States, from East to West. I would love to take six months and go for a road trip, for bouldering, sport and trad. I haven’t done much trad over the years, but it’s something I want to do, pushing the mental state.”

Stay tuned for more updates from semi-finals and finals from the Vail World Cup.