Mau Huerta’s new V15 is also just the second boulder of the grade in his country. 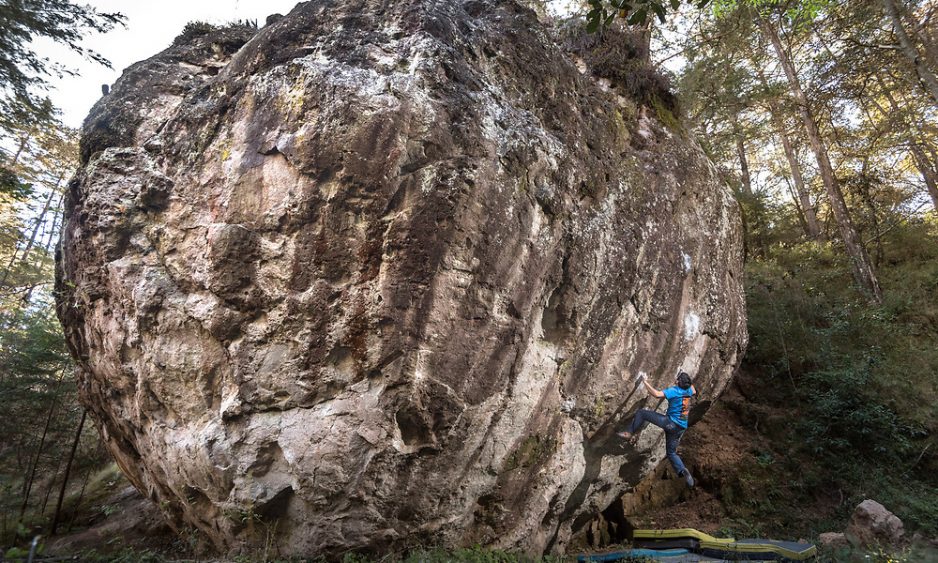 Mauricio “Mau” Huerta on his new problem Júpiter. It is the first V15 in Mexico. Photo: Marcos Ferro.

On the evening of March 15, Mauricio “Mau” Huerta became the first Mexican climber to send V15. [Editor’s note: This was before Mexico began implementing quarantine measures.]

He reached the historic mark with the FA of Júpiter in Mineral del Chico, a national park located about two hours north of Mexico City. If the proposed grade sticks, it will be only the second V15 in the country after Daniel Woods’ El Diablo, a jigsaw-shaped overhanging highball established in Peñoles in 2014.

The 31 year old from Morelia, in central Mexico, first tried the route in 2017, and says it took him between 30 and 40 sessions to complete. He managed all the moves in just his second session, but was unable to link everything until a few weeks ago.

“Over the last two years, every session I thought the next one would be the one!” he laughs, recalling the process.

Mau Huerta is no stranger to hard climbs. He sent the country’s first 5.14d, Lujuría, in Jilotepec in 2016. In 2011, Huerta made the second ascent of Ghetto Booty (5.14c/d) at Mt. Charleston near Las Vegas, which had remained unrepeated since it was established over a decade earlier. In 2018, he sent New Base Line, an iconic V14 in Magic Wood, considered to be a dream line for many, including Anna Stöhr, Clément Lechaptois, and others.

We chatted with Mau to learn a bit more about the new problem.

Can you tell us about Júpiter?

It’s one of the best lines in Mineral, on a huge boulder that’s about eight meters high in the Sudáfrica sector. It was cleaned by Diego Montull, who helped develop the area along with Santiago Rodriguez and others. The moves are long on small crimps.

It was so hard for me, I had to get the best conditions. I’d say 90% of the sessions were at night, and we had to get some big lamps. There’s one move in the middle, if I didn’t have enough friction, I just couldn’t hang on it.

I decided to name it Júpiter because the boulder looks a bit like a planet, and it represents something very big for me.

How did you decide on the grade?

When I first started trying it [in 2017], I didn’t think about the grade. I thought it could be V14, which seemed logical to me. At the time, I had only climbed V13. The next step would be V14, and I thought Júpiter could be that.

Then I went to Magic Wood [in 2018] and started trying more V14s. When I got back, I realized Júpiter was harder. Much harder. I was training a lot, doing it in the best conditions, and still just couldn’t do it.

Rustam Gelmanov worked it for two sessions and said it was very hard. I’m very curious to see what other climbers think.

What does it mean to you, and the climbing community in Mexico, to achieve this feat?

Of course, it means a lot to me.

More than anything, I’m excited for the next generation of climbers here. There are now so many double digit boulders for them to try. If you are a young climber here, and want to do your first V11, V12, V13, you don’t have to take trips anymore to some other country. You have options now in Mineral.

And as a coach and route setter, you could say I feel responsibility to give all this experience back to the community. That’s something I really enjoy.