MÁS Not Menos: A Climbing Zine for the People, by the People - Rock and Ice
News +

MÁS Not Menos: A Climbing Zine for the People, by the People

“For us it’s important to set up a space where people can see themselves,” says Hiram Trejo, one of the founders of MÁS, a new climbing zine. 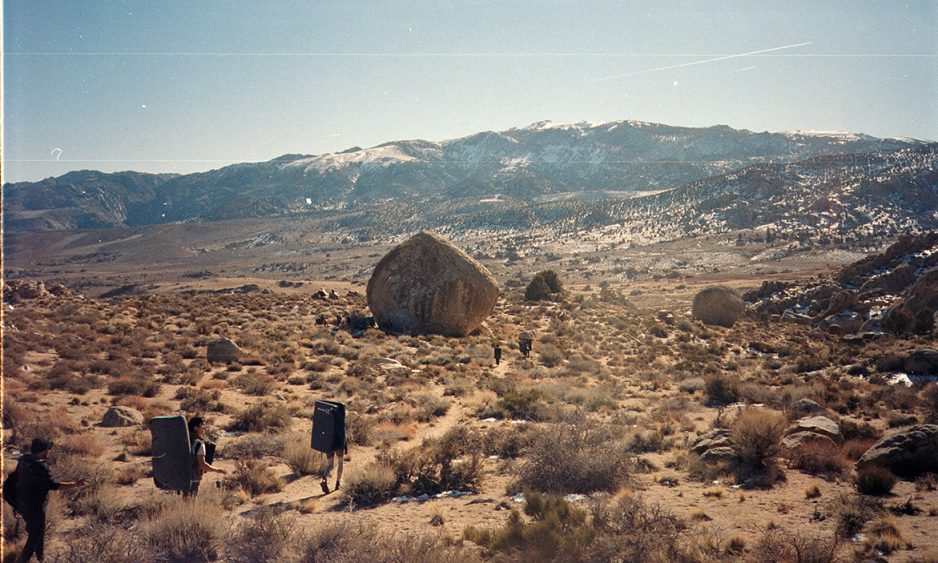 On the cover are two puffy-clad persons bat hanging on a rock ledge. The thin white text at center might say “mos,” as in Mos Def, or “eele,” or nothing at all. If you were curious, you’d flip open the pages. You’d discover it’s a zine about a climbing trip to Bishop, California.

What’s notable is the lack of notation on the jacket. There are no headlines. No bawdy declarations of the latest-greatest. No top destinations you have to visit. In fact, the text simply reads, “MÁS.” The number “2” is on the spine.

If you were curious, you might wonder what the heck this is about.

Bella Rojas, Hiram Trejo, and Nic Sabo care about the aesthetic of climbing. The trio are the creators of MÁS, a creative expression-cum-media collective whose aim is to showcase the mosaic of the activity, especially the parts that can’t be defined as easily as the line of a route.

“We saw in each other and other people that we don’t make climbing all about climbing,” begins Rojas. “For us, it’s not so much sending a boulder problem, but all the processes that go into that, the culture that surrounds it—we wanted to document that. It’s missing in traditional media.”

For example: Turn a few pages and you see a climber dancing across red volcanic tuff. He’s surprisingly color-coordinated in dark purples and black, as if he just came from a poetry slam. The opposite spread shows someone’s silhouette against a desert backdrop, a spiraling sun made of white stone twirls to their right. In both cases, there is beauty in the interaction with the rock. Climbing or not.

The group has now created two zines that show a broader perspective of the sport; beyond the grades, the fancy gear, and frankly, the implicit ideas of what a “climber” should look like.

“For us it’s important to set up a space where people can see themselves,” says Trejo. “Without all the rules about how it works, how you’re supposed to act outdoors.”

The second lookbook is a 35mm study of a winter jaunt to the city in Inyo County, California. It shows more like the travel you and your buddies might take—dogs on crash pads, spliffs being passed, washing in the sink at Vons—than something you’d see from the Instagram of the stars. Simply, MÁS is for the people by the people.

Curious to learn more about the latest edition? We’ll let Rojas and Trejo fill you in. The following are their words—quotes appear in no particular order.

“We don’t just do climbing trips. We eat the food, enjoy the culture, go to museums. We make sure that everything we’re interested in gets fully explored.” – Trejo

[In regards to Bishop] “Instead of going to obscure crags that aren’t documented, we want to take a…” (Rojas finishing Trejo’s sentence) “Fresh perspective on classic climbs that people have seen before, but take a new lens that people haven’t seen before. [To show the] other elements: How cold it is, all the layers, shooting the shit, camping, getting dressed in your car, basically all those things are part of the experience. Hopefully a lot of climbers can relate.”

“My first time was on real rock. I was walking by the beach, saw some friends that were climbing, and they invited me to try it out. Been hooked since then. Got obsessed, started working at a climbing gym, started setting, got really involved with the community.” – Trejo

“The biggest thing you see is the exposure to nature. Bishop is a rough place; It’s a desert, rough winter and summer…” (Rojas finishing Trejo’s sentence) “looks desolate.”

“We went to the Manzanar concentration camp. [Editor’s note: From March 1942 to November 1945, the United States government incarcerated more than 120,000 Japanese American men, women, and children in remote, military-style camps, mostly across the western interior of the country.] It’s so close to Bishop and a lot of people don’t know about it. We try to make sure we integrate those historical or cultural aspects.” – Rojas

“As soon as I graduated high school, decided to go to art school.” – Trejo

“Overwhelmingly white, overwhelmingly focused on grade accomplishments and FAs. Obviously, if you look at a typical mag you’ll see people with the best gear or best technical outfit. That’s a barrier for a lot of people, they’ll see someone doing cutting edge ascents with that gear: That’s inaccessible. We’re documenting our friends, people with the gear they have, in the outfits they feel comfortable in, and hopefully other people see that and don’t feel barred from participating.” – Rojas

“We have a rule with everything we do: We try to give back to the spaces we were at. For example, the Paiute-Shoshone [Cultural Center] is located in Bishop. It is so relevant to the landscape where those images are taken; brings awareness to the people that are on that land and have a history with that land. [Editor’s note: 100% of proceeds are donated to Paiute-Shoshone Cultural Center in Bishop, which documents and celebrates the heritage of the indigenous people of the Owens Valley, and The Okra Project, which supports the Black Trans community.]” – Rojas and Trejo

You can buy the zine (though volume 2 is sold out!) at masomenos.shop. And again: 100% of proceeds are donated to The Okra Project, which supports the Black Trans community and the Paiute-Shoshone Cultural Center in Bishop, which documents and celebrates the heritage of the indigenous people of the Owens Valley.

Belay Devices: The Different Kinds And How To Choose One