A story more than 40 years in the making, and more than anything else about an incredible partnership on the rock. 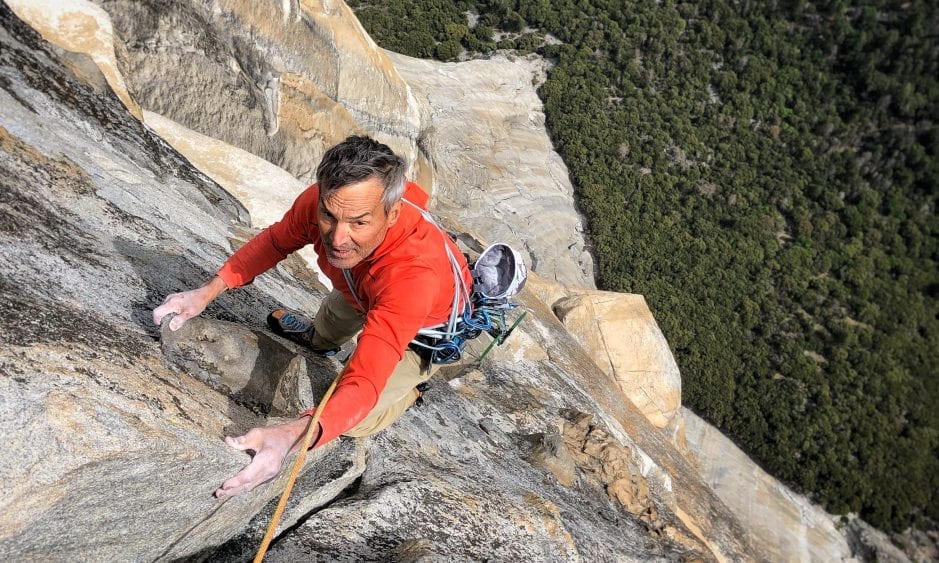 Mark Hudon one pitch below the summit of El Capitan, on the last 5.10 pitch of Freerider. Photo: Jordan Cannon.

Exactly 40 years after then 23-year old Mark Hudon and his 21-year-old partner Max Jones made one of the best early free attempts of the Salathé Wall on El Capitan, Hudon has returned to the Big Stone and come ever so close to finally freeing it. In October, Hudon, now 63, supported by 25-year-old Jordan Cannon, free climbed all but 15 feet of Freerider, adding a new chapter to his free-climbing saga on El Cap that began in 1979.

But for a full appreciation of Hudon’s path to Freerider in 2019, you have to go back to the beginning.

In “Free As Can Be”—an account of Hudon and Max Jones’ attempt on the Salathé that appeared in Rock and Ice 252 (August 2018)—Jeff Smoot wrote, “In 1979, free climbing on the big walls of Yosemite was in its infancy.” But Hudon and Jones were pushing the form forward fast: “The pair intended to climb the Salathé in a style they called ‘as free as can be,’ which meant not fooling around too long on any given pitch, nor letting a few aid moves stop them from enjoying an otherwise fantastic long free pitch of route.”

They put in a spectacular effort. They freed most of the route except the toughest parts. They did not free the pendulum into the Hollow Flake, simply because they didn’t consider it. They freed all but four moves of a fist-to-tips crack that Todd Skinner later freed at 5.13b in 1988. “Hudon and Jones were crazy ahead of their time,” Hans Florine told Smoot.

Hudon told Smoot for the article, “My only regret is that we didn’t go back and do it. … We should have gone back, but we didn’t. The ethics of the day were, you try, you fail, you don’t go back.”

And so that was that. After 1979, Hudon climbed plenty, but never returned to El Capitan.

Then, in 2009, something changed. “I realized that every time I was telling someone about rock climbing I was really telling them about climbing El Cap,” Hudon said. So he decided to try the Nose in a Day (NIAD). That year, he did the NIAD in 15.5 hours, and it marked the start of a new era for him and El Cap. “I’ve climbed 22 El Cap routes since then,” Hudon said, all aid routes like Iron Hawk and Zenyatta Mondatta.

A few years later, he realized he had unfinished business in terms of free climbing on the Captain, too. He had the time to devote to a massive project—“I’m retired; I live in a van and have unlimited time, I can do anything I want,” he explained—and so decided to try to free the monolith bottom to top, once and for all—an easier variation to the Salathé pioneered by Alexander Huber in 1998, and free soloed by Alex Honnold in 2017—was the obvious choice.

Hudon started trying in earnest in 2015. He tried twice that year, with two different partners, but couldn’t finish the job. Still, there was progress: He free climbed all but 160 feet of the route.

Hudon tried again in 2016, with yet another partner. Again, he came up short. “At that point, I thought, ‘This simply isn’t meant to be.’ Fourth time up there. So I just figured those were the cards that had been dealt,” Hudon said.

Fast forward to 2018. Hudon was climbing up at Donner Summit when he met a young man named Jordan Cannon. They started chatting and got along right away. “Jordan is really aware of the history of climbing. He’s really interested in the progression of how things work, and he’s really interested in trying to experience that history,” Hudon said. Cannon offered to support Hudon for another crack at the Freerider.

Whereas Hudon never had perfect synergy with his three other partners trying Freerider in 2015 and 2016, he did with Cannon. They both enjoyed long routes, and they were both psyched to get things done. “I tell people,” Hudon said, “that when the alarm goes off at 4 in the morning for us to go do some route, we both get up. We’re both determined. He wants to do things as much as I do. Maybe more.”

In March 2019 Hudon and Cannon met up and started training. They went to Joshua Tree, Red Rocks, Zion. In Zion, they got on Moonlight Buttress, and though he was nervous going into it, Hudon said that it ended up as “one of the best climbing days of my life.” He onsighted or flashed every pitch. “For me, that was huge,” he said. “That was a big confidence booster.”

Though the original plan had been to train all spring and wait to try the Freerider in the fall, they figured what the heck, and headed to the Valley. “We hiked to the top of El Cap, rapped in, and then free climbed out,” Hudon said. “I’d never done that. We freed the Enduro Corner and that was completely wild for me. Max and I were the first to free the Enduro Corner exactly 40 years ago. It was just weird: I was 23 back then. Why am I here now? What makes me think I can free climb this thing? That’s what I was thinking as I came into the Valley. But it went fine.”

It looked like this might finally be the time for Hudon to get Freerider done. And then came the snow. “ It snowed and snowed and snowed,” Hudon remembered. They gave the route a burn after it cleared up, but Hudon wasn’t feeling it. Another sendless season.

Over the summer, Hudon and Cannon both worked in the bike shop of Hudon’s old-buddy Max Jones. When the fall rolled around, they figured they might as well “get on this Freerider thing again.”

Things started off incredibly well. Hudon had been repeating a mantra to himself throughout the whole Freerider journey that he had to “climb perfect moves.” On the bottom of the route, he did just that. He said, “I climbed perfect moves all the way to Lung Ledge. I did the Slabs first try. I was climbing really well, it was really neat.”

They bivied on Lung Ledge for a night, and then climbed to the Ear the next morning—Hudon again executing ”perfect moves.” Cannon brought out the best in Hudon’s climbing. By the end of day three, Hudon had freed up to the Alcove. The Teflon Corner above would be the make-or-break pitch for his whole free attempt.

On day four, Cannon and Hudon woke up at 4 a.m. and Hudon set to work on the blank, slick dihedral. “I did better than I’d ever done before,” he said, “but I could never really do anything where I could establish myself, go bam bam bam, and then repeat it. Nothing ever really fit. I could do some random moves, and then I’d come off. I could never find a flow.”

Hudon was beat by the end of the day. He started to think about the big picture. “I still had a third of the route left and a lot of hard pitches to do. It would be great to free all of El Cap, but… this is hard… I mean, I’m an older guy, it takes me longer to recover. My future doesn’t stretch out dozens and dozens of years. I’m staring down the end here. I have to live with the body and time that I have. And it just felt too hard to be fierce. So I thought, ‘You know, I’m going to be happy if I can free climb the whole route except for two moves on the Teflon Corner. If I can free the route it with just 15 feet of aid, I’ll still be happy.’”

Put another way, it ultimately came down to what he had told Cannon toward the beginning of their partnership: “If it ain’t fun, it ain’t done.” Hudon knew Freerider would be hard—which was good!—but it was still important to him to have fun climbing it.

The next morning, Hudon gave the pitch one last try, before deciding to yard through the secion he couldn’t do. The many pitches that lay above ultimately pushed Hudon to his limit. But he freed everything.

Hudon was overwhelmed by emotion on the day he and Cannon finally topped out. He called his daughter, crying as he told her the news and as she told him how proud she was of him. He called Max, his friend who the whole journey started with in 1979, and told him that he wished he was there with him. And then he looked over at Cannon. “Oh boy, I’m almost crying right now,” Hudon said, remembering the moment. “It’s just… Jordan wanted to do this thing with me and he stuck with me. And I’m freaking old guy. He had to make big sacrifices. It was the greatest gift anyone’s ever give me. Jordan is such a great partner.”

Hudon didn’t do exactly what he set out to do, but he came damn close. Cannon, having supported his good friend, still had plans of his own, though. Hudon was ready to return the favor.

Several days later, the two were back up El Capitan as Jordan attempted to free climb Freerider in a single day. They started at 2:00 am. Cannon climbed, and Hudon jugged. Cannon climbed virtually everything first try. On the boulder problem pitch, he needed two attempts, and stuck the karate-kick move just before the sun turned the wall hot and greasy. “It was a phenomenal bit of climbing to watch,” Hudon said.

Cannon then climbed the entire Enduro Corner in the blazing sun. Near the end of his rope mentally and physically, Hudon encouraged Cannon on, just as Cannon had for him days earlier.

Cannon and Hudon topped out after 14.5 hours.”And it was just fucking beautiful,” Hudon said. “It was the most amazing climbing feat I’ve ever seen.”

Of everything that came out of his Free-As-Can-Be journey, Hudon said, his friendship with Cannon is the most special. “I’ve been climbing 47 years, and I’ve had some really good years climbing in my life. I’ve had great partners, and Jordan’s as good as they come.”

Peace and Passion for Connor Herson