Margo Hayes, 19, becomes the first woman to climb a confirmed 9a+/5.15a with her ascent of La Rambla in Siurana, Spain. 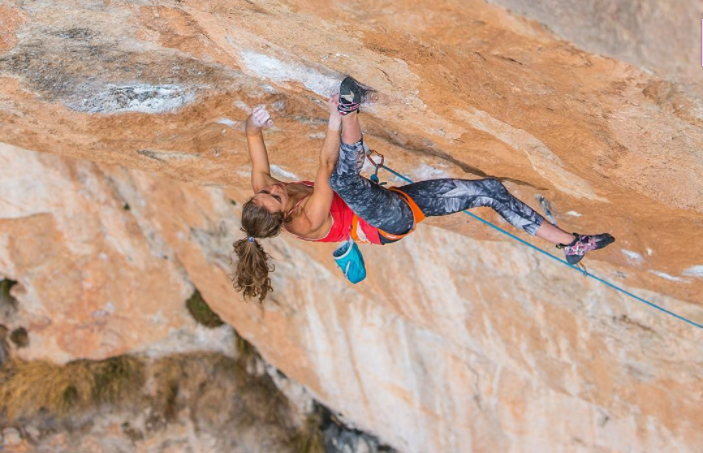 Margo Hayes made history with her ascent of La Rambla in Siurana, Spain yesterday—she became the first woman to climb a confirmed 9a+/5.15a. The 19 year old from Boulder, Colorado spent seven days projecting the benchmark 5.15a climb.

“I am overwhelmed and humbled by the support I’ve received from the climbing community, and my family and friends near and far,” Hayes shared on Instagram. “None of us achieves our dreams alone, we do so together, and build on those who have come before us.

“We are a community that not only supports each other regardless of our backgrounds and differences, but is also one that realizes the importance of respecting and preserving our planet. The climbers at the cliffs in Siurana last weekend came from many nations, and were a snapshot of what the world can be like, one of support, communication, and peace.”

No heel is too high

La Rambla was established by Alexander Huber in 1994, and at the time, the climb was considered to be the hardest sport route in Spain. After a hold broke near the top of the route, Huber installed a lower anchor and redpointed the route for its first ascent at 5.14c. Spanish climber Ramón Julián Puigblanque later extended the route by 20 feet, and in 2003, he made the first ascent of the new variation at 5.15a. The extended climb kept the name La Rambla, while Huber’s line became La Rambla Original.

The 45-meter La Rambla gained global recognition and attracted the best climbers from around the world. Today the route has seen at least 16 ascents, by climbers such as Chris Sharma, Adam Ondra (at 15 years old), Alex Megos, Jonathan Siegrist, and most recently, on the day before Hayes’s ascent, by the Colorado climber Matty Hong.

Hayes was climbing in Spain for only 10 days during a break from school (she is studying abroad in France this year), and she went right after La Rambla. “I think once she did the moves and started making big links, it flipped a switch, and she didn’t look back,” Jon Cardwell, who has been projecting the route with Hayes, Matty Hong and Greg Mionske, writes Rock and Ice in an e-mail.

According to Eddie Fowke of The Circuit Climbing, Hayes, who had come close to sending on February 25, pushed back her return flight to France to have a few more days on the climb. She only needed one.

“Witnessing Margo’s ascent was pretty legendary,” Cardwell writes. “Honestly, it wasn’t too surprising, as we all knew she was going to do it soon because her previous tries were so close and she simply wasn’t giving up.

“But when it actually happened, I think it gave us all chills, the whole canyon lit up with cheers, and Margo was in tears, exhausted and happy. It was a moment I will never forget.”

That moment when you send ‘La Rambla’ and become the first woman to climb (9a+ or 5.15a). Congratulations @margojain, a very well deserved send, and a big day for climbing.

In August 2016, Hayes climbed her first 5.14d with Bad Girls Club in Rifle, Colorado. “Hey boys, I’m joining the club. Officially a bad girl,” she reported after her ascent. Hayes was the first woman climber to send the Colorado test-piece, breaking into the “Boys Club” of Bad Girls Club. She spent approximately seven days projecting the route.

Other women, however, have come close. In 2005, the Spanish climber Josune Bereziartu made the second ascent of Fred Nicole’s Bimbaluna at St. Loup, Switzerland. Nicole gave the climb a slash grade of 9a/+ (5.14d/5.15a). And in March 2015, Ashima Shiraishi sent Open Your Mind Direct in Santa Linya, Spain, although controversy remains regarding the grade of the route. The first ascentionist called the route a 5.14d, but a hold recently broke near the top, which might have made it more difficult. Ashima was the first person to send the route since the hold broke. According to  8a.nu, “local experts”, who went unnamed, believe the route to still be 9a (5.14d), as suggested in the guidebook. Only time will tell. Shiraishi has also climbed Ciudad de Dios (5.14d/5.15a), Santa Linya, Spain.

“As for what it means for rock climbing?” Cardwell writes of Hayes’ La Rambla ascent. “I think it represents more than the grade, it’s an example for women, and all climbers, that if they’re willing to put themselves out there, try really hard, and approach goals despite the imaginary boundaries, one can go further than they thought.”

Also read Margo Hayes and the Power of Mind