Marc-André Leclerc reached a narrow ledge near the top of Torre Egger’s headwall. He was out of food, out of stove fuel, but only 200 meters remained. The 24-year-old Canadian alpinist decided to bivy for the night and wait for morning to climb the peak’s final snow mushroom to the summit. But at 5 a.m., a Patagonian winter storm blasted the granite tower.

Leclerc’s onsight solo attempt of the original winter ascent route was over. Chased by spindrift avalanches, he bailed in a “full on snowstorm,” he tells Rock and Ice. Despite the “wild escape,” he wasn’t giving up yet. He left his rack and ropes at the base of the climb before marching back to town. 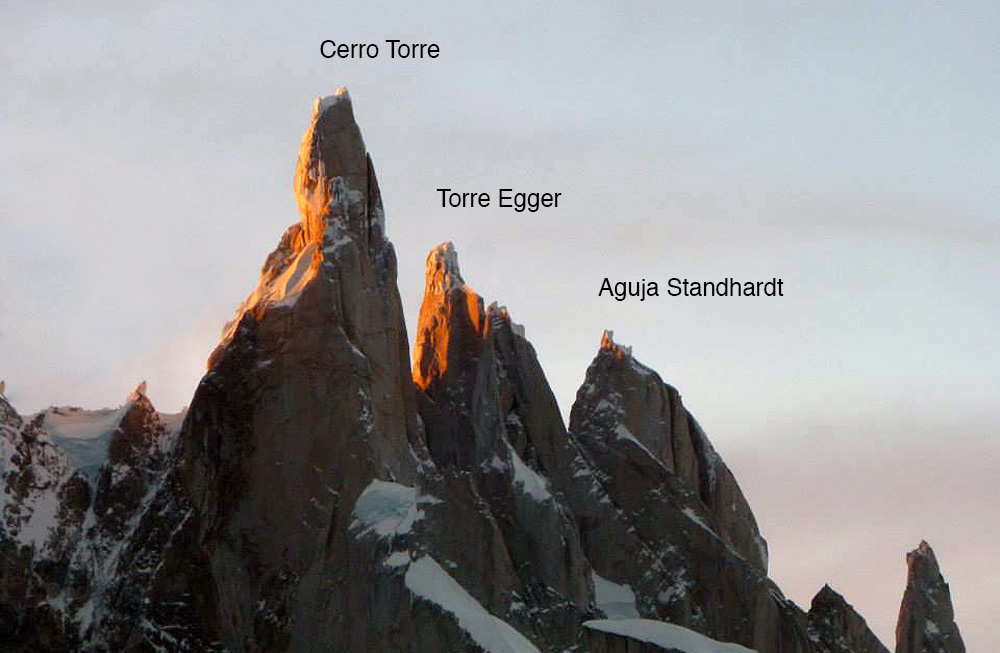 Torre Egger (2,685 meters)—named in honor of Austrian alpinist Toni Egger, who died on the neighboring tower Cerro Torre—was first climbed by Jim Donini, John Bragg and Jay Wilson via the American Route in 1975. A team of Swiss alpinists, Stephan Siegrist, Dani Arnold and Thomas Senf, bagged the first winter ascent 35 years later, and in 2016, Colin Haley made the first solo ascent of the tower. But Torre Egger had never been soloed in winter.

Leclerc knew the Torres well. In January 2015, he and Haley completed the first reverse traverse of the range—from south to north. Starting at the Col de Esperanza, they climbed Cerro Torre (10,170 feet), Torre Egger (9,350 feet) and Aguja Standhardt (8,858 feet) in a single push. On February 2 and 3 they teamed up again to establish a new, direct route up the north face of Cerro Torre, which they named Directa de la Mentira (5.10 A1 WI 4-5 1,200 meters).

Later that month, Leclerc returned to the Torres, alone. On February 21, he soloed the 4,000-foot Corkscrew route (5.10d A1) on Cerro Torre—widely considered the hardest route ever soloed on the granite tower. He returned to Patagonia later that year and on September 24, 2015, he free soloed the Tomahawk to Exocet Link Up on Aguja Standhardt. His ascent was the second known solo, after Haley’s in 2010, and the first known free solo of Aguja Standhardt.

“[Soloing the three major Torres] wasn’t my goal originally, but after I did the first two I figured I might as well [do Torre Egger],” Leclerc says. So during the first weather window this season, his fourth time in Patagonia, Leclerc was back to the Torres.

After his close, but unsuccessful first attempt on the East Pillar of Torre Egger, another weather window approached and Leclerc decided to try again, this time in a single push from glacier to glacier since he knew the route. On September 17, at 2:45 a.m., he left his high camp and began climbing under a full moon. He chose a variation to the Winter Link-up to Titanic line of his previous attempt. This variation, to save time, took Leclerc 300 meters up an unclimbed ice couloir below a “threatening serac” into the Winter Link-up to Titanic line.

“Conditions were good,” he says. “The ice was thin due to the dry winter, but much of the rock was reasonably snow free on the headwall.”

Leclerc mostly climbed free solo, but belayed three 45-meter pitches and three 10- to 15-meter sections, one of which he protected by back loop. He aided a few sections “here and there when necessary,” he says. For the first half, he climbed in boots and crampons, then switched to rock shoes for five pitches, and then back to boots and crampons for the rest, except for a stem groove just below the summit snow mushroom, which required rock shoes again.

“The sun is so strong here, even by late winter, so timing was critical,” he says. “I just made sure to be on the east facing rock pillar as the sun hit and I was fine to rock climb without gloves. At times it was cold but not a big deal overall.”

Leclerc says he was “pretty in control” the entire time, although below the snow mushroom he had to make a couple “committing but short lived” moves to aid through the overhanging rock bulge on his ice tools. “In the main mushroom there was a good groove. The mushroom on Egger is not hard, aside from that rock bulge that protrudes right below it,” he says. He reached the summit an hour and a half before dark.

“It was a bit alarming,” he says. “I was like, oh shit, I made it.” He was surprised? “Yeah, totally,” he says. “I didn’t know the way exactly and the climbing was engaging enough that it was not ‘in the bag’ until about 30 seconds before I popped out on top.”

Summit of Torre Egger two days ago. Apologies for the language but it describes the general feeling of the moment.

His solo of the East Pillar of Torre Egger, along with his previous solos of Cerro Torre and Aguja Standhardt, completed his solo “trifecta” of the three main towers in the Torre group. With Patagonia’s notoriously strong wind, he didn’t stay on the summit long to celebrate. At 6:15 p.m., he began the descent. “Rapping straight off the edge of the headwall and not knowing the way down was a bit committing!” he says. He chose to rap the headwall to avoid traversing. But other than a stuck rope and solo to free it, his descent was smooth.

“The full moon rising was epic,” Leclerc says. “Blood red and huge, coming over the horizon.” He completed two-thirds of his rappels in the dark.

Leclerc reached his tent at 11:30 p.m., five hours and 15 minutes after leaving the summit and 21 hours after he set off from the glacier that morning. To his disappointment, he had miscalculated the amount of fuel he would need, for the second time, and had enough to heat only one bowl of miso soup before it ran out. With no fuel, he was unable to melt snow for water or cook his remaining freeze-dried meals. No dinner, no breakfast.

“So I packed up pretty early [the next morning] and walked, starving and dehydrated, to the edge of the glacier where there was running water, and finally passed out in the sun for an hour,” he says. “I still had no food for the hike out.

“On the trail I felt like a floating head without a body for a while. It’s good to fast sometimes I guess,” he adds.

When he reached town 10 kilometers later, Leclerc posted up for three consecutive dinners. “The beer hit me like a slap in the face as well!” he says. “Bonus.”

Back at my tent in the Torre Valley, looking a little beat up after rappelling the East Pillar of Torre Egger alone in a winter storm. Can’t wait to go back! #arcteryx #lyofood #type2fun