Marc-André Leclerc, 22, has soloed the 4,000-foot Corkscrew route (5.10d, A1) on Cerro Torre—the hardest route ever soloed on the granite tower—in a single day and in terrible conditions. 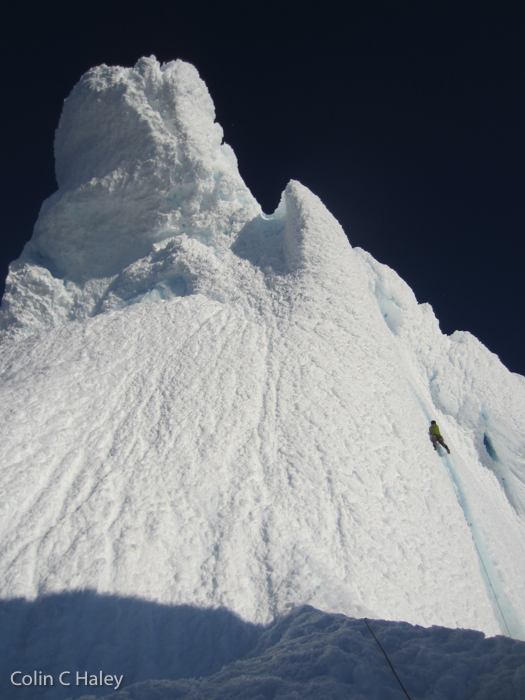 Marc-André Leclerc, 22, has soloed the 4,000-foot Corkscrew route (5.10d, A1) on Cerro Torre—the hardest route ever soloed on the granite tower—in a single day. He climbed it on February 21.

Rolando Garibotti, of the Patagonian climbing website pataclimb.com, called it “an ascent of earth shifting proportions,” and compared its magnitude second only to Renato Casarotto’s first ascent of Fitz Roy’s north pillar.

“Soloing in the alpine is one of my favorite styles of climbing,” Leclerc, from British Columbia, Canada, tells Rock and Ice. “So to make a solo ascent of what I consider one of the world’s most beautiful peaks was inevitable for me.”

The Corkscrew winds its way around Cerro Torre, beginning on the southeast ridge before traversing to the south face, where it joins the Ragni Route to reach the summit. It was first climbed by Ole Lied and Trym Atle Saeland in 2008, using a section of the Compressor Route. The Corkscrew saw its first “fair means” ascent by Colin Haley and Chad Kellogg in January of 2013. Avoiding use of the bolts on the Compressor Route, they climbed the Filo Sureste and traversed west to join the Ragni Route.

Leclerc’s feat is all the more impressive given the terrible conditions he encountered. He says, “It had been raining through the night, I had gotten soaked, as I had no tent or bivy sack and the cracks were running with water.”

He battled wet rock on the lower sections of the route and, higher up, verglas that he “often had to scrape off with [his] fingernails before committing to footholds,” he said. Once he was above the clouds, the rock was too frosted to climb.

“The sun was coming up so I listened to music for about 30 minutes until things melted off enough to keep going. From then onwards conditions were quite good!”

Leclerc climbed in the dark, “98 percent free-solo,” only using a rope to protect a five-foot section of the climb. On the steeper pitches he climbed solo, dragging a rope behind to haul up his backpack, which he left hanging from a fifi hook at the base of each pitch.

“My pack and rope both got stuck several times so I would have to rappel back down to free them, then re-climb the pitch,” he says. He carried no jumars or GriGri. “One pitch I climbed three times because the bag got stuck twice behind flakes!”

Completing the SE ridge, he was able to leave his rock gear at a belay and solo the rest wearing a light backpack.

The Canadian climber is enjoying his second climbing trip to Patagonia. “I’ve dreamed about this place for nearly 10 years,” he says. “I think I first saw a picture of Cerro Torre when I was 11 and was totally blown away.”

“The Corkscrew seemed like the perfect challenge as soloing it would require me to employ all the skills I have learned both at the crag and in the mountains.”