The search and rescue operation for the two climbers, missing in the Mendenhall Towers since last Wednesday, was abandoned on the evening of March 13. Marc-André Leclerc was 25 years old and Ryan Johnson was 34 years old. 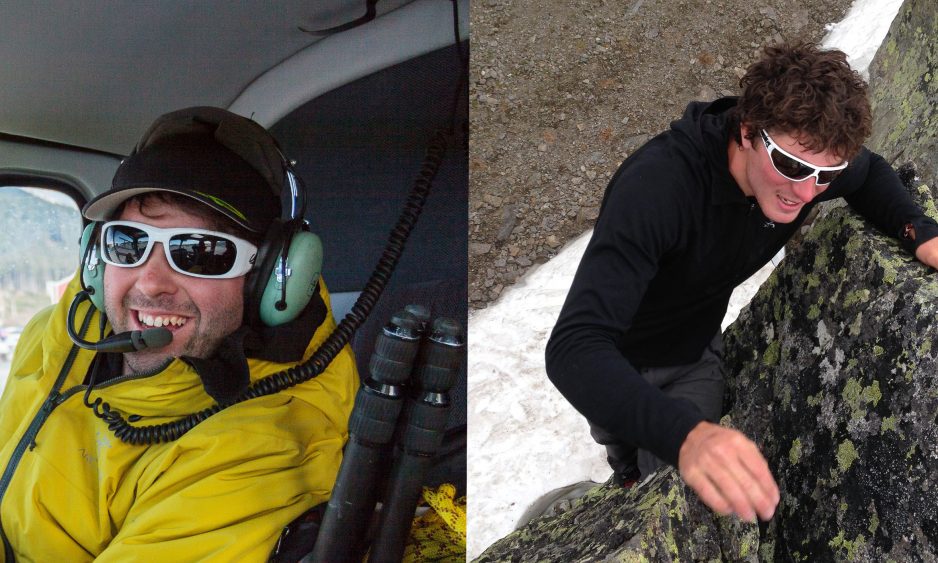 Search and rescue efforts for Marc-André Leclerc and Ryan Johnson, two alpinists that went missing in the Mendenhall Towers, near Juneau, Alaska a week ago, ceased last night, Tuesday, March 13. Leclerc’s father, Serge Leclerc, announced on Facebook, “Sadly we have lost 2 really great [climbers] and I lost a son I am very proud of.”

After getting flown onto the Mendenhall Ice Field on Sunday, March 4, Johnson and Leclerc established a new route on the Main Tower’s north face, on Monday, March 5. Leclerc posted a picture from the top of the Tower announcing the duo’s success. Afterwards, they started to descend. They had skied to the base, leaving a cache of gear along the way, and planned to return to Juneau by Wednesday, March 7.

When they failed to return or make contact, a rescue operation began, with Juneau Mountain Rescue and the Alaska Army National Guard combining forces to search the Towers and Glacier below. In a helicopter reconnaissance on Thursday, March 8, Juneau Mountain Rescue reported that they had located “the climber’s cache of gear that was not needed for the climb, which included skis, poles and a backpack.”

Over the next few days, rescuers conducted several more helicopter searches in between long bouts of bad weather and thick cloud cover. They combed multiple possible descent routes from the air, but found no sign of Leclerc or Johnson.

A final reconnaissance on Tuesday, March 13, along the north face, yielded information that suggested an accident during the descent. In a dispatch from the Alaska State Troopers, reads: “An intact anchor rope was seen at the top of an ice shoot on the 4th Tower. Two climbing ropes were also seen in a crevasse midway down the 4th Tower. The ropes match the description of the gear carried by Johnson and Leclerc.”

Late on the evening of Tuesday, March 13, Serge Leclerc posted to Facebook announcing the deaths of his son and Johnson. The rest of his post read:

Thank you for the support during this difficult time. My heart is so broken…Part of me is gone with him…

Our family appreciate all of your prayers and we would like to ask for a time of privacy as we come to grip with these devastating developments… Marc-André was an amazing, loving man and he has touched many lives in so many ways. He will be remembered and loved forever. I know he is with our Lord and I will be with him again one day.

Ryan Johnson was 34 and Marc-André Leclerc was 25.

Johnson, a Juneau-based climber, was one of the driving forces behind new development in the Mendenhall Towers in recent years. In 2007, under the auspices of the American Alpine Club’s Mugs Stump Award, Johnson and Sam Magro made the first ascent of West Mendenhall Tower’s north face via a 2,500-foot line they christened The Great White Conqueror and graded V M5 AI4 A1.

When they first arrived at the base of the towers, Johnson wrote in the 2009 American Alpine Journal, “the weather fell apart, and for two weeks we endured the most extreme storm either of us had known. We had to abandon terrestrial life and spend five days in a snow cave, leaving only occasionally to relieve ourselves.” While such condititions might have ruined the spirits of a lesser alpinist, Johnson emerged on the other side of the storm excited to climb. “After dropping 20’+ of snow, the storm left to make someone else’s life miserable. So we were left with this 2,500’ unclimbed north face of the West Tower and blue skies.”

In the following years, Johnson established other major lines in the Mendenhall Towers, notably The Fall Line ( (1,110m, 65° M5) with Gabe Hayden, and Balancing Act (1,400’, 5.11c) with Hadyen and Jason Nelson. Both routes were on the West Tower.

In 2012, Johnson traveled to Kyrgyzstan with Samuel Johnson (no relation), where the partners climbed new terrain on the 5,842 meter southeast face of Kyzyl Asker, reaching 5,300 meters before they turned back. In the 2013 American Alpine Journal, Dougald MacDonald writes of their attempt, “The pair hoped to tackle the mixed headwall the following morning, but a snowstorm that began during the night pinned them under a tarp at their bivouac, and after 24 hours they began rappelling, narrowly escaping injury from avalanches during the descent.”

Johnson leaves behind a two-year-old son, Milo. A GoFundMe campaign page, established to support costs associated with Milo’s “care/life/college” now that his father is gone, notes, “Ryan was as equally passionate about fatherhood as he was about alpinism.” To contribute to the GoFundMe that will benefit Johnson’s son, visit here.

Marc-André Leclerc was one of the boldest and daring, yet also understated and modest, alpinists of his generation.

In a profile in Climbing, Drew Copeland describes Leclerc’s introduction to climbing: “For Leclerc’s fifteenth birthday, his mother gave him Mountaineering: The Freedom of the Hills. He began making solo forays onto the six-pitch Falcon Crest Wall at Harrison Bluffs, teaching himself rope systems as he went.”

From there he went on to make his mark on the granite bluffs of Squamish, the steep mountain faces around British Columbia, and the skyscraping granite spires in Patagonia.

In Squamish his exploits were many. Highlights include a speed-solo of the 1,000-foot Grand Wall (5.11a A0) on the Chief in September 2013 in under 58 minutes, and an October 2013 first free ascent of the former aid climb The Last Temptation of St. Anthony, at 5.13 R/X.

In a remembrance on Gripped.com, Brandon Pullan relates a story that speaks to Leclerc’s unassuming, humble demeanor, and the depth of his incredible skills. “He went to solo Professor Falls, a classic WI 4,” Pullan writes, “But he accidentally climbed the wrong route.

“Later he said, ‘It felt really hard for WI 4, but I just figured it was early season. Found out later it was Sacre Bleu’”—a WI 5/6 multi-pitch.

In an interview with Rock and Ice after this latter climb, Leclerc said he climbed the route “98 percent free-solo” and only used his rope on a five-foot section. The legendary Patagonia climber Rolando Garibotti called Leclerc’s climb “an ascent of earth shifting proportions.”

Later in 2015, Leclerc returned to Patagonia and onsight free-soloed Aguja Standhart via the Tomahawk to Exocet Link Up. It was the first free solo of the tower.

In 2016, he took his solo-antics to a frightening new level in Patagonia by completing the second ever solo, but first ever winter solo of Torre Egger. He reached the summit via the East Pillar, thereby completing a solo “trifecta” of the three most prominent spires in the Torres. He told Rock and Ice at the time, “[Soloing the three major Torres] wasn’t my goal originally, but after I did the first two I figured I might as well [do Torre Egger].”

Beyond Patagonia, some of Leclerc’s other career highlights included a team free-ascent of the Muir Wall (VI 5.13+), on El Capitan in Yosemite, California, with his girlfriend Brette Harrington and Alan Carne; the first free solo of Infinite Patience (VI M7 )on the Emperor Face of Mount Robson, in the Canadian Rockies; and a free-solo link-up of three separate routes—French Reality (M5 WI 6+); Nightmare on Wolfstreet (M7+ WI 6+) into The Day After les Vacances de Monsieur Hulot (M5 WI 6); and Nemesis (WI 6)—on the Stanley Headwall, in the Canadian Rockies, in just 12 hours.

Marc-André Leclerc is survived by his mother Michelle, his father Serge, his partner Brette Harrington.

A separate GoFundMe campaign to help Leclerc’s next of kin with the costs of the rescue operations can be found here.